Owwa official claims photo was taken from paper which also made an error
By: Meg Adonis - Reporter / @MegINQ
Philippine Daily Inquirer / 04:05 AM May 19, 2020 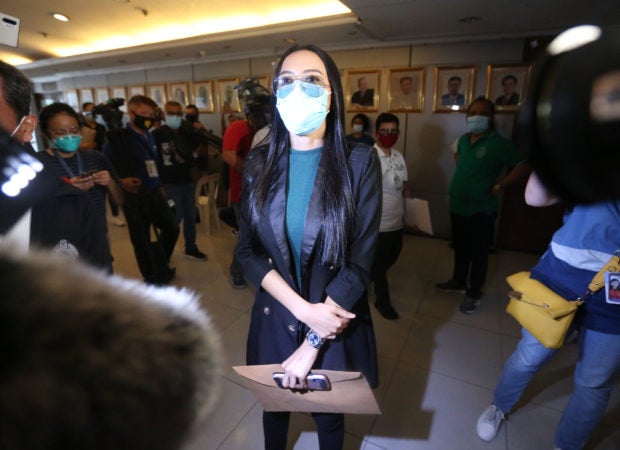 SUBPOENAED Overseas Workers Welfare Administration Deputy Administrator Mocha Uson appears before the National Bureau of Investigation cybercrime division, which ordered her to give her side on the complaint filed against her by two concerned citizens. —MARIANNE BERMUDEZ

Uson went to the National Bureau of Investigation’s cybercrime division office in Manila to file her response to two concerned citizens who had accused her of violating the Bayanihan to Heal as One (BHAO) Act by posting “fake news.”

The complaint was based on Uson’s April 3 post on Facebook showing photos of 15,000 personal protective equipment (PPE) suits that she said had been bought by the national government for frontliners.

Netizens, however, pointed out that one of the photos was originally posted by SM Foundation, which had donated the PPE to a private hospital.

Uson, who later issued an erratum, had been criticized numerous times in the past by netizens for posting false information.

NBI Cybercrime Division chief Victor Lorenzo said that Uson had submitted photos of her posts and the sequence of events regarding the complaint, which would be subject to evaluation.

He clarified, however, that although Uson apologized for her erroneous post, an apology would not “extinguish” criminal liability when one commits an offense.

Last week, the NBI issued a subpoena, directing her to appear at the cybercrime division office to answer the complaint against her. This was in line with Justice Secretary Menardo Guevarra’s directive for the agency to crack down on those spreading fake news in violation of the BHAO Act.

Section 6 (6) of the law signed on March 24 penalizes individuals or groups “creating, perpetrating, or spreading false information regarding the COVID-19 (new coronavirus disease) crisis on social media and other platforms” that could cause confusion among the general public.

“I intended to share the good news of our national government’s efforts for the safety of the country’s front-liners. I copied the photo from Philippine Star, a respected member of mainstream media, and it turned out that they also made a mistake,” Uson told reporters.

The OWWA official added that she was “not surprised” by the complaint filed against her and that she had gone to the NBI to air her side.

“Government official or not, we must comply with the subpoena and explain,” Uson said.

The NBI earlier apprehended a public school teacher for offering a P50-million reward on social media to anyone who would be able to kill President Rodrigo Duterte.

The warrantless arrest sparked public outcry after Ronnel Mas was seen kneeling and weeping before NBI officials, apologizing to the President for “adding to the problem” in the middle of a health crisis.

Netizens pointed out that Uson’s case might end with the subpoena with no formal charges filed against her, contrary to the immediate arrest of ordinary citizens like Mas.