Corona: This is a hoax; we are a family of no ordinary means | Inquirer News
Close
menu
search

Corona: This is a hoax; we are a family of no ordinary means 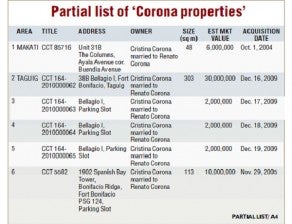 Chief Justice Renato Corona on Friday denounced as “a hoax” and “black propaganda” a list of 45 properties in four Metro Manila cities that he and his wife had allegedly acquired which prosecutors from the House of Representatives released to the media on Thursday.

“The recent list from the Land Registration Authority (LRA) enumerating 45 titles, purportedly owned by me and/or my wife is nothing but black propaganda to poison the people’s minds. I condemn this list of titles as a hoax, calculated to cleverly inflict maximum damage to me in the eyes of the public. By its sheer number alone, it smacks of bad faith and deception,” Corona said in a statement on Friday.

The Chief Justice said he owned only five properties and these are all declared in his statement of assets, liabilities and net worth (SALN)—the house he was living in that he inherited from his parents and four condominium units “that came from our own sweat and toil.”

“If they [his accusers] must dig and dig far, they have to study my family history and the family history of my wife. We are families of no ordinary means,” Corona said.

“I have concealed nothing. I will expose the malice and black propaganda behind this hoax of a list from LRA at the right time and place, and in accordance with the correct procedure in the impeachment court,” he said.

Corona decried the “malice” displayed by Rep. Niel Tupas Jr. and House prosecutors in disclosing the supposed information on his family’s alleged properties in the form of a request for subpoena to the Senate impeachment court to which was attached a letter from the LRA listing the alleged properties.

“This is foul. This is my family. What are they thinking?” Corona’s lawyer, Ramon Esguerra, quoted the Chief Justice as saying as he vented in front of his wife and children.

Tupas and his group of prosecutors on Thursday asked the Senate impeachment court to compel Corona’s entire family, including his wife, his three children and son-in-law to appear at Corona’s impeachment trial which starts on Monday.

Attached to the prosecutor’s request to the Senate was a letter from the LRA administrator listing 45 properties in the cities of Makati, Parañaque, Marikina and Taguig, pertaining to which the prosecutors wanted the Corona family members to produce various documents at the trial.

In his statement on Friday, Corona noted the many repetitive entries which he said were meant to make the list “deliberately long to create a false and misleading information about my assets.”

In some of the listed items, “the titles are in the name of persons I do not even know,” while in others “properties belonging to my  balaes (in-laws) are listed and claimed to be mine,” Corona said.

He said there were many “double counts” in an apparent effort to “lengthen the list” and “to give the false impression that I have many properties.”

He said he felt sad that the LRA came out with the list.

“Atty. Bautista of the LRA who signed the certification was my student,” he said.

Esguerra said the report on the 45 alleged properties was “plainly malicious.”

“You will get an indication that it’s really, really some form of fishing expedition, a witch hunt. Of course, they have a cover (in the form of a) request for subpoena and then they fed it to you (the media),” the lawyer said.

Esguerra accused Tupas and other House prosecutors of trying to shift the burden of proof to Corona by coming out with entirely new allegations of ill-gotten wealth.

“What is there for us to prove? The burden is on them. If they have the documents, let them show these documents to the court to prove the ownership of these properties. You are the ones making the accusations, you prove it,” he said.

But before prosecutors can do so, they will have to amend the articles of impeachment as the latter do not include the new allegations.

Corona’s lawyers are also set to file a formal objection to Tupas and company’s request that Corona’s entire family be made to “attend and testify” before the Senate impeachment court.

Senate President Juan Ponce Enrile earlier said that amending the articles of impeachment would require returning these to the Lower House where they would be subjected to a fresh round of voting.

Contrary to Tupas’ new allegations, Esguerra said the Coronas have only five properties. They are the old family residence in Xavierville, two condominium units in Taguig, a unit at The Columns in Makati and another unit at One Burgundy Plaza across Ateneo de Manila University in Quezon City.

“What they have, as we will prove in due time, are only five properties,” Esguerra said.

But to make it appear that the Coronas were corrupt, his accusers have included on the list of properties condominium certificates of title (CCTs) for parking lots for the condominium units, according to the lawyer.

According to Esguerra, Corona had informed him that the Marikina properties mentioned in the Tupas request had been acquired in the 1980s and have been disposed of. Corona himself said that the eight Marikina lots listed actually referred to a piece of property that had been subdivided into 7 lots.

Esguerra said the Chief Justice expressed surprise over the “Parañaque/Pasay City” property (Transfer Certificate of Title No. 58643) included by Tupas. Corona theorized that the property probably belongs to the family of his son-in-law, and if so, it was unfair for prosecutors to drag his in-laws into the issue.

Esguerra justified Corona’s acquisition of the five properties, saying: “After living for 40 years in his Xavierville property and also working in private practice, he has earned enough to invest.”

On Thursday night, Corona dared his critics to prove that he indeed owned the 45 properties mentioned by Tupas. If they could do so, he said he would sign a deed of donation and give them the properties.