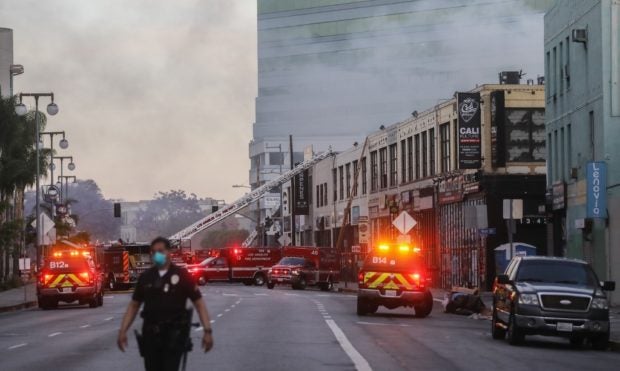 An LAPD officer keeps watch on a multiple structure fire as LAFD firefighters work following an explosion on May 16, 2020 in Los Angeles, California. 11 firefighters were injured in the explosion which occurred after they responded to the downtown blaze. Mario Tama/Getty Images/AFP

LOS ANGELES — At least 11 firefighters were injured in downtown Los Angeles when a fire in a commercial building sparked a major explosion and spread to nearby structures on Saturday evening, fire officials said.

Crews were fighting a blaze at a one-floor commercial building in the city’s Toy District when the blast occurred, according to a fire department statement.

The wounded suffered burns but the severity of their injuries was not known, Los Angeles Fire Department Captain Erik Scott told reporters.

Some 230 responders battled the blaze as it spread to other buildings in the area before it was extinguished around two hours after it began.

The LAFD said the building housed a business that sold smoking and vaping paraphernalia including butane honey oil, a highly flammable resin used for inhaling marijuana.

“The cause of this fire is of paramount concern and it remains under active investigation,” Scott said.

Several storefronts in the area were blackened while one fire truck had a scorched roof and was covered with debris.

Thick smoke from the blaze was visible from miles away.

“My thoughts are with our brave @LAFD firefighters,” he said in a tweet.