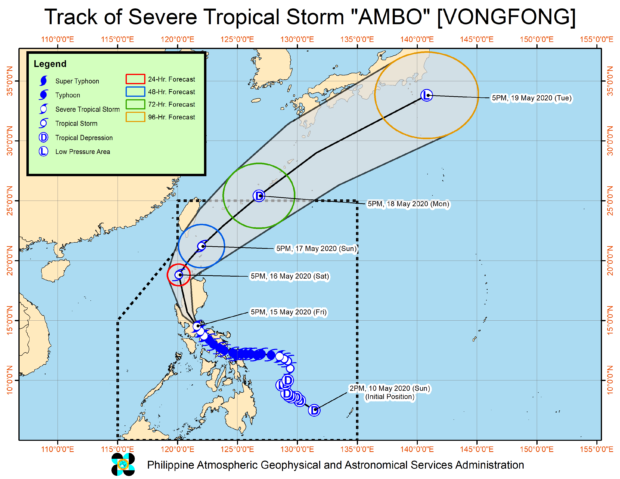 MANILA, Philippines – Severe Tropical Storm Ambo (International name: Vongfong) may have weakened slightly but moderate to heavy rains are still expected as the weather disturbance remains to cover a huge part of the Luzon landmass.

The Philippine Atmospheric, Geophysical and Astronomical Services Administration (Pagasa) said in its late night update that Ambo was last spotted in the vicinity of San Miguel town in Bulacan, with maximum sustained winds of 95 kilometers per hour (kph) near the center and gustiness of up to 160 kph.

It was seen moving northwest at a speed of 20 kph.  Infrared image from Pagasa’s Himawari satellite shows large cloud clusters covering Luzon almost entirely, save for the Bicol Region.

Meanwhile, the central part of Quezon province, Laguna, Batangas, Cavite, Bataan, Zambales, rest of Isabela, rest of Cagayan, Batanes, are under Signal No. 1.  Aside from these above-mentioned areas, all previous signal warnings issued by Pagasa have been dropped.

Ambo may eventually weaken into a low pressure area after it leaves the Philippine area of responsibility on Monday.

Despite the weakening of the weather disturbance, sea travel is still prohibited as of now.  Residents on the other hand are advised to monitor Pagasa updates on Ambo, and coordinate with local disaster risk reduction management offices for possible evacuation.