HONG KONG  — Tear gas is among the new flavors at a Hong Kong ice cream shop. 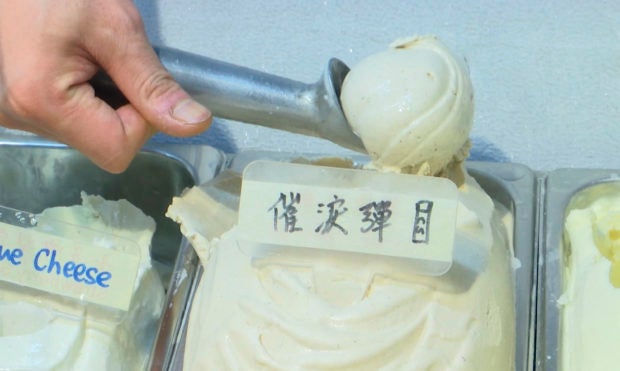 This May 4, 2020, image made from video shows a scoop of tear gas flavor ice cream, in Hong Kong. A Hong Kong ice cream shop has created this flavor using pepper, in memory of all the tear gas fired by the Hong Kong police in recent months. The flavor is a sign of support for the pro-democracy movement, which is seeking to regain its momentum during the coronavirus pandemic, the shop’s owner said. (AP Photo)

The main ingredient is black peppercorns, a reminder of the pungent, peppery rounds fired by police on the streets of the semi-autonomous Chinese city during months of demonstrations last year.

“It tastes like tear gas. It feels difficult to breathe at first, and it’s really pungent and irritating. It makes me want to drink a lot of water immediately,” said customer Anita Wong, who experienced tear gas at a protest. “I think it’s a flashback that reminds me of how painful I felt in the movement, and that I shouldn’t forget.”

The flavor is a sign of support for the pro-democracy movement, which is seeking to regain its momentum during the coronavirus pandemic, the shop’s owner said. He spoke on condition of anonymity to avoid repercussions from the pro-Beijing government.

“We would like to make a flavor that reminds people that they still have to persist in the protest movement and don’t lose their passion,” he said.
He tried different ingredients, including wasabi and mustard, in an effort to replicate the taste of tear gas. Black pepper, he said, came closest to tear gas with its throat-irritating effects.

“We roast and then grind whole black peppercorns and make them into gelato, the Italian style. It’s a bit hot, but we emphasize its aftertaste, which is a sensation of irritation in the throat. It just feels like breathing in tear gas,” the 31-year-old owner said.

More than 16,000 rounds of tear gas were fired during the protests, according to Hong Kong authorities, many in densely populated districts where narrow streets are filled with small restaurants and apartment blocks.

The protests began over proposed legislation that would have allowed criminal suspects to be extradited to mainland China to face charges. While the bills were withdrawn, demonstrations continued over concerns Beijing is eroding the civil liberties granted to the former British colony when it was returned to Chinese rule in 1997.

The ice cream shop also provides a space for people to express their views about the movement, including the use of sticky notes that featured in the “Lennon walls” that appeared throughout the territory at the height of the demonstrations.

Such expressions date back to the 2014 Occupy Central protests, when a major stairway leading to the Hong Kong government headquarters was plastered with thousands of notes carrying messages of support.

At about $5 a serving, tear gas ice cream has been a hit. Prior to social distancing regulations over the coronavirus outbreak, the shop’s owner said he was selling 20-30 scoops per day.

The demonstration have mostly died away as the city fights the coronavirus, but there are widespread expectations that larger actions may emerge during the summer.

Already, police have been out in force to deter large gatherings and the government is pressing ahead with legislation that would make it a crime to mock the Chinese national anthem.