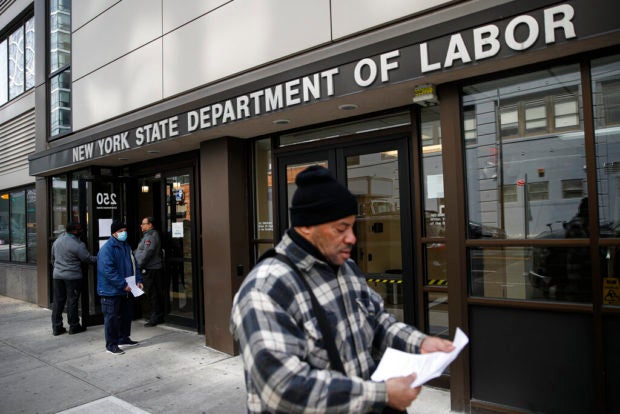 In this March 18, 2020 file photo, visitors to the Department of Labor are turned away at the door by personnel due to closures over coronavirus concerns in New York. A record-high number of people applied for unemployment benefits as layoffs engulfed the United States in the face of a near-total economic shutdown caused by the coronavirus. The surge in weekly applications for benefits far exceeded the previous record set in 1982. (AP Photo/John Minchillo, File)

WASHINGTON — Nearly 3 million laid-off workers applied for U.S. unemployment benefits last week as the viral outbreak forced more companies to slash jobs even though most states have begun to let some businesses reopen.

Roughly 36 million people have now sought jobless aid in just the two months since the coronavirus first forced businesses to close down and shrink their workforces, the government said Thursday. An additional 842,000 people applied for aid last week through a separate program for self-employed and gig workers.

All told, the figures point to a job market gripped by its worst crisis in decades and an economy that is sinking into a deep downturn. The pace of new applications for aid has declined over the past several weeks but is still four times the record high that prevailed before the coronavirus struck hard in March.

The waves of job cuts have heightened concerns that additional government aid, on top of the nearly $3 trillion already allocated, is necessary to sustain the economy. Without another aid package, many economists worry that thousands of small businesses will go bankrupt, leaving millions of the unemployed with no job to return to. And state and local governments, facing huge revenue shortfalls, could be forced to lay off millions more workers and cut services.

Republicans in Congress are locked in a standoff with Democrats, who have proposed trillions more in aid. Republican leaders say they want to first see how the previous rescue packages affect the economy and have expressed skepticism about approving much more spending now. That sentiment has alarmed some economists.

“There really isn’t any sign that the labor market is bottoming out yet,” said Daniel Zhao, senior economist at Glassdoor, the career website.

The Trump administration insists that as states reopen, more Americans will shop, dine out and resume other activities, thereby stimulating the economy. But early data suggests it is fear of contracting the virus, even more than shutdown orders, that may be impairing the economy. Without stronger public health measures, such as widespread testing or a vaccine, economists say such fear will depress growth even as more states reopen their economies.

Even though Georgia reopened its restaurants for sit-down dining late last month, Adam Ozimek, chief economist at Upwork, said data from the reservation site OpenTable shows that reservations are still 91% below their pre-virus level.

“Simply ending lockdowns is not going to be a panacea for these companies,” Ozimek said. “People aren’t going out because they don’t feel safe yet.”

The number of people seeking unemployment benefits actually rose last week in Georgia, as well as in Florida, which has also started to reopen. In Florida, that increase likely reflects a troubled system that caused a belated processing of claims that had been filed earlier.

A few other states that have lifted some restrictions, like South Carolina and Texas, reported declines in jobless claims.

President Donald Trump appeared to respond to the report by tweeting, “Good numbers coming out of States that are opening. America is getting its life back!”

In Ohio, shopping malls have reopened for the first time since March but have seen little traffic. Roughly two-thirds of the stores in one mall outside Toledo were still closed Tuesday.

“Those are the signs that we’ve stretched the economy too far, and it’s starting to tear,” Ozimek said.

State and local governments, which cut nearly 1 million workers in April, are running out of money and collectively posing a threat to the national economy. The recession will likely produce the sharpest plunge in state tax revenue since the center began tracking such data in the early 1970s, said Lucy Dadayan, senior research associate at the Urban-Brookings Tax Policy Center.

About two-thirds of the states have reported data for April, with most showing worrisome declines. California’s tax revenue fell 65% compared with a year earlier. New Jersey’s dropped 59%, Pennsylvania’s 51%. Sales tax revenue has shrunk as consumer spending has tumbled. And income taxes have been diminished by the widespread job losses.

In the meantime, jobless workers in some states are still reporting difficulty applying for or receiving benefits. These include free-lance, gig and self-employed workers, who became newly eligible for jobless aid this year.

Kelly Kelso, a stage crew member in Nashville, filed for unemployment aid after her company, Live Nation, canceled all summer tours. She has no idea when touring will resume. She applied in late March but hasn’t received a single check. And she can’t get answers.

“I’ve probably called a hundred times and been disconnected every time,” Kelso said.

Kelso’s partner is a self-employed musician who finally began receiving unemployment benefits after five weeks. But for the couple, who have a 5-year-old son, money is scarce. Their landlord is demanding rent.

The latest jobless claims follow a devastating jobs report last week. The unemployment rate soared to 14.7% in April, the highest rate since the Great Depression, and employers shed 20.5 million jobs. A decade’s worth of job growth was wiped out in a single month.

Even those figures failed to capture the full scale of the damage. Many workers in April were counted as employed but absent from work but should have been counted as temporarily unemployed.

Millions of other laid-off workers didn’t look for a new job in April, likely discouraged by their prospects in a mostly shuttered economy, and weren’t included, either. If all those people had been counted as unemployed, the jobless rate would have reached nearly 24%.

Most economists have forecast that the official unemployment rate could hit 18% or higher in May before potentially declining by summer.