ILOILO CITY—Drumbeats echoed on the streets of Lambunao, Iloilo province, on Thursday, as the town marked the recovery of five members of a family stricken by the new coronavirus disease (COVID-19).

A local government firetruck and a smaller truck carrying a group of drummers went around the town center, announcing that all members of the Wong family are well and had won their fight against the disease.

Dr. Ma. Mercedes Ballarta, municipal health officer, and her team went to the family’s house to hand over their test results, showing Beverly Wong, 44, was negative for the disease.

“We were about to hold our 3 o’clock prayer on Wednesday when we got a call from Dr. Ballarta that Beverly and [another household member] were cleared. Tears of joy flowed,” Vivian Wong told the Inquirer.

Vivian, 39, along with her 70-year-old mother, Bernardita, and siblings Richard, 41, and Joanne, 48, tested positive for the disease but were cleared in test results released on April 23.

Beverly had to be isolated on the second floor of their house until their test results came out.

“It has been 47 days since our family was quarantined. We have been praying and waiting,” Vivian said. “Our prayers have been answered.”

The first patient in the family was Vivian’s father, Fermonio “Dodoy” Wong, 70, who died on March 29, a day after his test results were released.

His remains were immediately cremated in Iloilo City with no family member present.

Soon after, other family members tested positive for COVID-19 although they did not show any symptoms of the disease.

Only one other Wong sibling, who is working abroad, was spared from the disease. 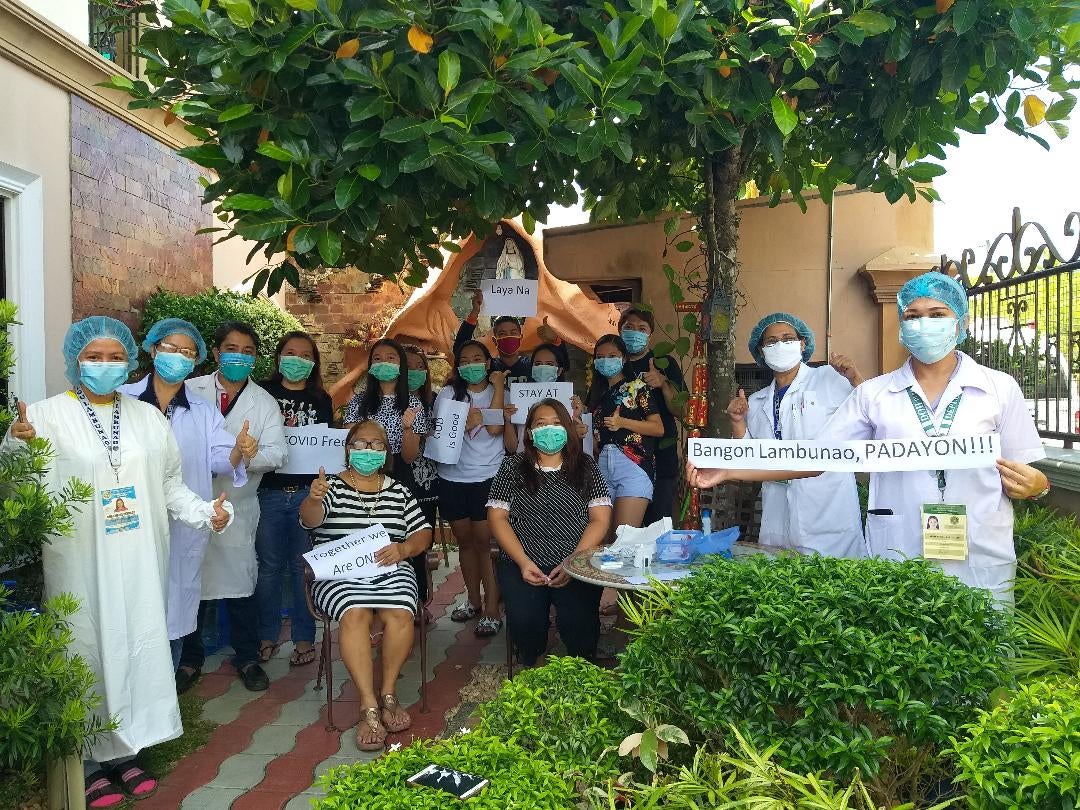 Bernardita Wong (seated) and her children (standing from left) Richard, Beverly, Joanne and Vivian at their home in Lambunao in Iloilo after all family members were cleared of the disease. —CONTRIBUTED PHOTO

Vivian said the family was thankful for the rural health unit, local officials and government personnel, their friends and their town residents who gave them food and other assistance during their prolonged quarantine.

“We still have sacks of calamansi (Philippine lime) given by our townmates and friends,” she said.

But Vivian said family members were still hesitant to go out of their house and be with other people even after their recovery.

She cited an instance when a neighbor reported her to the local health officials after she checked their hardware store’s warehouse, located about 200 meters from their house. The informant, however, was told that Vivian had already tested negative for the disease.

“We expect people to avoid us and we understand. We may be doing the same thing if we were in their position,” Vivian said.

She said that on Monday, she would reopen the hardware store, which is among the businesses allowed to operate under quarantine rules. Iloilo province is now under general community quarantine.

Once travel restrictions are lifted, the family plans to travel to Iloilo City to claim the ashes of their patriarch and give him a decent burial.