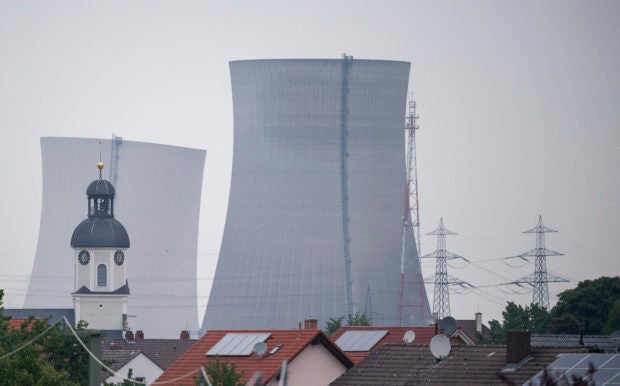 The cooling towers of the decommissioned nuclear power plant collapse after being blown up in Philippsburg, Germany, May, 14, 2020. The towers in southwestern Germany were demolished early Thursday in a pair of early-morning explosions whose timing was kept under wraps to prevent crowds from gathering during the coronavirus pandemic. (Sebastian Gollnow/dpa via AP)

BERLIN — The two cooling towers of a former nuclear power plant in southwestern Germany were demolished early Thursday in a pair of early-morning explosions whose timing was kept under wraps to prevent crowds from gathering during the coronavirus pandemic.

Operator EnBW had said ahead of time only that the 150-meter (nearly 500-foot) towers at the Philippsburg plant, near Karlsruhe, would be brought down on Thursday or Friday. On Thursday, the company said they were blown up just after 6 a.m.

Such demolitions usually attract many sightseers but large assemblies aren’t allowed at present under rules aimed at preventing the spread of COVID-19.

The Philippsburg plant’s two reactors were shut down in 2011 and 2019 as part of Germany’s plan to exit nuclear power. The country’s last reactor is set to go offline at the end of 2022.

A transformer station that will help bring electricity generated from renewable sources in northern Germany to the country’s south will be built on the site of the towers.