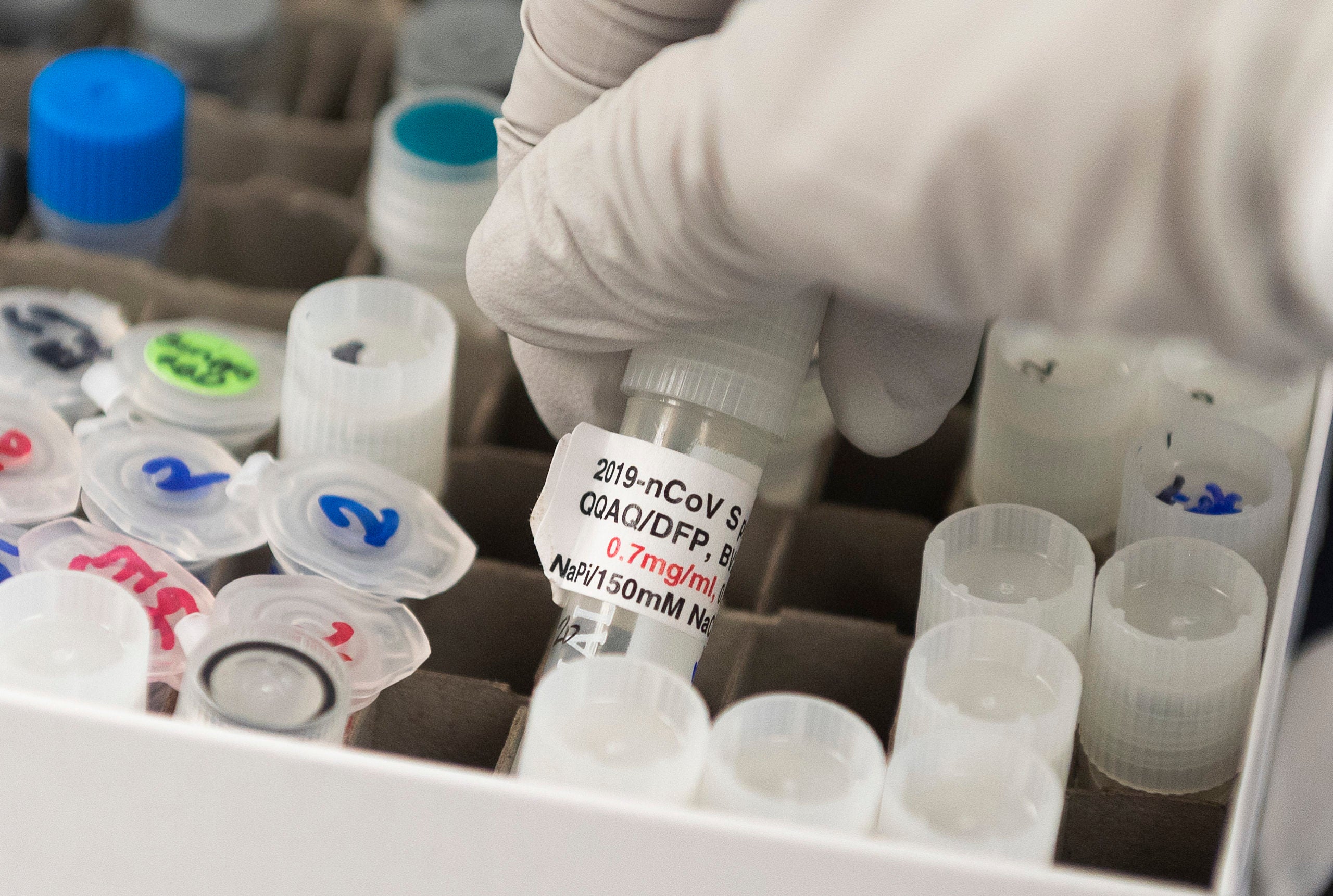 (FILES) In this file photo Dr. Nita Patel, Director of Antibody discovery and Vaccine development, lifts a vial with a potential coronavirus, COVID-19, vaccine at Novavax labs in Rockville, Maryland on March 20, 2020, one of the labs developing a vaccine for the coronavirus, COVID-19. – US authorities warned healthcare and scientific researchers May 13, 2020 that Chinese-backed hackers were attempting to steal research and intellectual property related to treatments and vaccines for COVID-19. Organizations researching the disease were warned of “likely targeting and network compromise by the People’s Republic of China,” a statement from the FBI and the Cybersecurity and Infrastructure Security Agency said.”China’s efforts to target these sectors pose a significant threat to our nations response to COVID-19,” they said. (Photo by ANDREW CABALLERO-REYNOLDS / AFP)

WASHINGTON — Chinese hackers are trying to steal COVID-19 vaccine research, US authorities said Wednesday, ratcheting up tensions between the superpowers as markets slumped on warnings from the US Federal Reserve that prolonged shutdowns could cause “lasting damage.”

Europe, meanwhile, pushed ahead with plans to gradually reopen for summer tourism, even as fears persist of a second wave of infections in the pandemic that has forced more than half of humanity behind closed doors in recent months.

With some countries scrambling after a fresh surge in cases and the global death toll exceeding 294,000, the World Health Organization (WHO) warned that the virus “may never go away.”

There is no proven therapy for COVID-19. An effective vaccine could allow countries and economies to fully reopen and potentially earn millions of dollars for its creators.

Amid such high stakes, hackers linked to Beijing are attempting to steal research and intellectual property related to treatments and vaccines, two US security agencies warned.

“China’s efforts to target these sectors pose a significant threat to our nation’s response to COVID-19,” the FBI and the Cybersecurity and Infrastructure Security Agency (CISA) said.

Neither agency offered evidence or examples to support the allegation.

Washington, which has confirmed almost 1.4 million US cases of the virus and more than 84,000 deaths, has increasingly blamed Beijing for the outbreak that first emerged in China late last year.

Beijing has repeatedly denied the US accusations.

The value of a vaccine was underscored as Jerome Powell, head of the US Federal Reserve, cautioned Wednesday that lingering shutdowns could cause “lasting” economic damage.

Powell’s warning burst the balloon on Wall Street, analysts said, with stocks sliding on the comments even as he also said the US economy should rebound “substantially” once the outbreak is reined in.

Trump, trying to jumpstart the world’s largest economy as he seeks re-election this year, is pushing past warnings from health officials — particularly top infectious diseases expert Anthony Fauci, who has cautioned that reopening too soon risks triggering an uncontrollable outbreak.

On Wednesday, the president dismissed Fauci’s call for caution as “not acceptable,” and in an excerpt of an interview with Fox Business to air in full on Thursday, Trump said: “I totally disagree with him on schools.”

Some hint of the cost of moving too quickly could be seen in European markets, given a further mauling by data showing fresh outbreaks in South Korea and Germany.

Russia, now the country with the second-highest number of virus cases, recorded more than 10,000 new infections after authorities this week eased stay-at-home orders.

Fears were also growing of a second wave in China, with the northeastern city of Jilin put in partial lockdown and Wuhan, where the virus was first detected last year, planning to test its entire population after clusters of new cases.

Still, with no vaccine in sight and dire economic data pointing to the worst downturn since the Great Depression of the 1930s, many countries were trying to navigate reopening.

Desperate to save millions of tourism jobs, the European Union set out plans for a phased restart of travel this summer, with border controls to be eventually lifted and measures to minimize infections, like wearing masks on shared transport.

In France, some beaches reopened on Wednesday — but only for swimming and fishing, while sunbathing remained prohibited.

People in England were allowed to leave their homes more freely, as data showed the British economy shrinking by two percent in January-March, its fastest slump since 2008 — and with a far worse contraction to come.

Chile imposed a total lockdown in its capital Santiago after a 60 percent leap in infections over the past 24 hours.

Argentine officials were watching Buenos Aires warily after one of its poorest and most densely populated neighborhoods showed a spike in infections. Water had been cut off in Villa 31 for eight days.

Brazil is emerging as a new global hotspot despite President Jair Bolsonaro dismissing the pandemic as a “little flu.”

Health experts have warned of potentially devastating consequences as the virus spreads through the developing world, where health care systems are under-funded and isolation is often not possible.

In northern Nigeria, fears that the virus is spreading have seen hospitals shut their doors to the sick.

Civil servant Binta Mohammed said she had to watch her husband die from “diabetic complications.”

“The four private hospitals we took him to refused to admit him for fear he had the virus,” she said.

But there were stories of hope, including two centenarians who survived the virus.

In Spain, 113-year-old Maria Branyas fought off the illness during weeks of isolation at a retirement home where several other residents died from the disease.

And in Russia, 100-year-old Pelageya Poyarkova clutched a bouquet of red roses as she was discharged from a Moscow hospital after her own recovery.

“She turned out to be a tough old lady,” the hospital’s acting director Vsevolod Belousov said.