MOSCOW — Kremlin spokesman Dmitry Peskov said Wednesday that he has been diagnosed with double pneumonia caused by the coronavirus and that he hadn’t met in person with Russian President Vladimir Putin for a month. 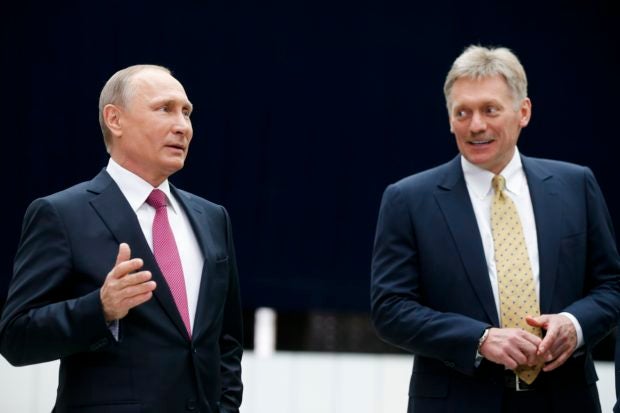 FILE – In this Thursday, June 15, 2017 file photo Russian President Vladimir Putin speaks to the media after his annual televised call-in show as his press secretary Dmitry Peskov, right, smiles in Moscow, Russia. Russian President Vladimir Putin’s spokesman Peskov said Tuesday May 12, 2020, that he is hospitalized with the coronavirus. The announcement comes just a day after Putin said Russia was successful in slowing down infections and announced easing some of the nationwide lockdown restrictions. (AP Photo/Alexander Zemlianichenko, File)

In an interview with Russian business newspaper Kommersant, Peskov said that after he tested positive for the virus his only sign of illness initially was a small fever. He told the paper he remained at home for several days until a CT scan showed infections in both of his lungs.

Peskov, 52, a key aide of Putin’s, revealed Tuesday that he was hospitalized with the virus but didn’t give details about his condition. His wife, Olympic ice dancing champion Tatyana Navka, also was infected and said she felt OK.

He said in the interview that after he tested positive, the absence of symptoms beyond the fever gave him a false feeling of security, but then his condition worsened and he went to a hospital.

“They caught it just in time,” Peskov said. “The essential thing isn’t to miss the moment, this virus is very bloodthirsty.”

He said he had followed all recommended precautions to avoid infection, noting that people were wearing protective gear inside the Kremlin, work documents were getting sprayed with disinfectant and in-person meetings were few.

It wasn’t clear when those officials last met with Putin, who has limited public appearances and held most of his meetings online during the virus pandemic.

Peskov said he and Mishustin discussed their their health on the phone, adding that the prime minister was recovering and already in “working condition.”

He said that prior to getting infected he had undergone tests on practically daily basis. “I had a feeling I was keeping things under control,” he said.
With over 242,000 reported cases, Russia now ranks second in the world after the United States in total confirmed infections. Russia also has reported 2,212 virus-related deaths.

Putin on Monday lifted a partial economic shutdown imposed in late March to stem the outbreak, saying it has helped slow down contagion and prevented the nation’s health care system from being overwhelmed.

He allowed the regions to reopen industrial plants, construction sites and other businesses depending on the situation in each of Russia’s 85 provinces.

Some questioned the wisdom of lifting the restrictions, pointing that Russia is yet to see a peak of contagion and raising doubts about the ability of the underfunded health care system to cope with the situation if the number of infections rise from some a daily level of 10,000-11,000 new cases reported over the past week.