Canada and the U.S. working on extending border closure

TORONTO  — Canada and the U.S. are working on an agreement to extend the closing their border to nonessential travel during the coronavirus pandemic, a Canadian government official said Wednesday. 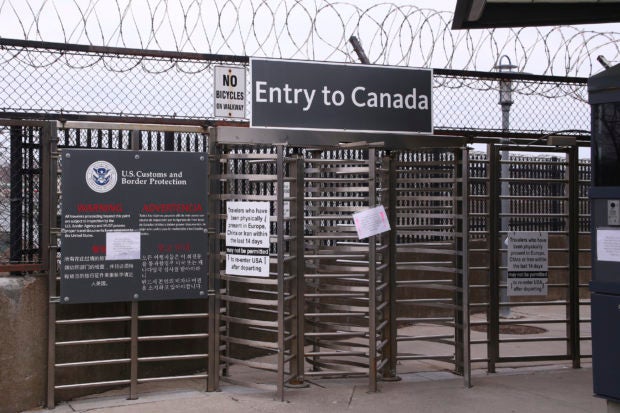 Signs Hang on the entrance way to Canada via the Rainbow Bridge, Wednesday, March 18, 2020, in Niagara Falls N.Y., President Donald Trump and Canadian Prime Minister Justin Trudeau have agreed to close the U.S Canada border to non-Essential travel in order to slow the spread of the coronavirus, but trade will not be affected. (AP Photo/Jeffrey T. Barnes)

The official, who was not authorized to be quoted by name to discuss the talks, said it is too early to lift the restrictions, which are set to expire next week. The Trump administration and Prime Minister Justin Trudeau’s government announced a 30-day extension of the restrictions last month.

U.S. President Donald Trump has said that the U.S.-Canada border will be among the first borders to open and that the U.S. and Canada are doing well in handling the pandemic.

But many Canadians fear a reopening. The U.S. has more confirmed cases and deaths from COVID-19 than any country in the world, though its per capita numbers are well below many other nations.

The U.S. and Canada agreed in March to limit border crossings to essential travel amid the pandemic. Nearly 200,000 people cross that border daily in normal times.

Essential cross-border workers like healthcare professionals, airline crews and truck drivers are still permitted to cross. Truck drivers are critical as they move food and medical goods in both directions. Much of Canada’s food supply comes from or via the U.S.

Canada sends 75% of its exports to the U.S. and about 18% of American exports go to Canada. The U.S. Canada border is world’s longest between two nations.