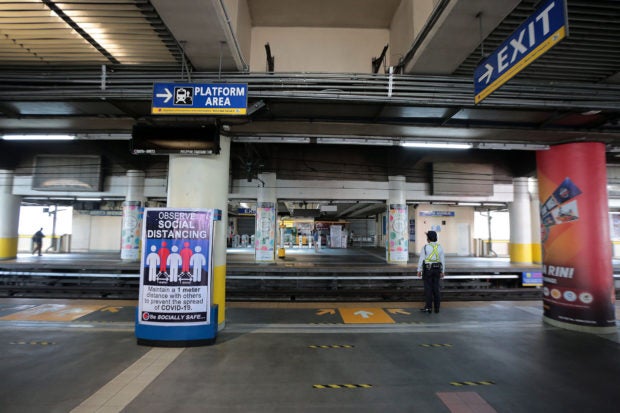 NOT ALL ABOARD Social distancing will be part of the new norms on the metro after the lockdown in Metropolitan Manila, but the government and private operators of the three elevated light-rail lines in the capital region have yet to announce howthey plan to control boarding at the usually crowded stations. With nobody controlling boarding at the train doors, social distancing signs like the one shown at the MRT 3 North Avenue station in Quezon City in the picture above will not be enough to prevent overcrowding on trains. —GRIG C. MONTEGRANDE

MANILA, Philipines — The entire Philippines will remain under quarantine after the lockdown ends on Friday, with the government’s coronavirus task force placing eight regions where the risk for infection is considered low under restrictions again on Wednesday.

He said the decision would be made official through an amendment to an earlier resolution issued by the Inter-Agency Task Force on Emerging Infectious Diseases, which was expected to be approved during the group’s meeting on Wednesday.

The reimposition means the entire country would be under some form of quarantine, with different levels of severity, Año said.

He said the local officials themselves asked for a return to restrictions, expressing concern that a premature exit from quarantine could touch off new outbreaks of the new coronavirus that causes the severe respiratory disease COVID-19.

“Many local chief executives—governors, mayors—sent petitions and requests saying they were not yet ready to remove community quarantine,” Año said in a press briefing in Malacañang.

New guidelines for areas under modified general community quarantine would be drawn up, he added.

But local officials, he said, could loosen some restrictions under a modified general community quarantine while still being in control of their borders and the movement of people, and allowing the reopening of certain industries.

Without some kind of quarantine, there might be a second or third wave of infections, Año said.

Health Secretary Francisco Duque III also said there had been an “honest mistake” in the task force resolution removing several regions of the country from community quarantine beginning Saturday, a day after the ending of the lockdown that President Duterte imposed in mid-March to halt the spread of the new coronavirus in the Philippines.

With the easing of restrictions, the government is loosening movement and business curbs for a phased reopening of the economy.

Most of the industries and sectors permitted to reopen in Metro Manila, Laguna and Cebu City, the areas under modified enhanced community quarantine, could only do so partially, meaning only half of their workforce could be on site and the others could work from home.

This restriction is lifted for those under general community quarantine.

Shopping malls and nonleisure commercial centers are among those that have been permitted to operate, presidential spokesperson Harry Roque said on Wednesday.

In these areas, motorcycles and e-scooters could be used but must only have one rider, while biking and nonmotorized travel is encouraged. Companies could deploy shuttle buses for their workers.

Airlines could still not operate domestic flights, but they would be allowed limited international flights.

Sea travel between general community quarantine areas would be permitted.

Limited outdoor exercises like walking, jogging and biking would be allowed under modified enhanced community quarantine, but not contact sports, Roque said.

People exercising must wear protective masks and keep a 2-meter distance from one another, he added.

Office administration and office support would be permitted, along with architecture and engineering services, legal and accounting services, scientific research and development, management and consultancy, and other financial services like money exchange, insurance, and noncompulsory pension funding.

Wakes would be permitted only in areas under general community quarantine.

Real estate activities would be allowed, but only leasing would be permitted in modified enhanced community quarantine areas.

As for government work, only a skeleton force would be allowed under modified enhanced community quarantine, while other employees would work from home.

Under general community quarantine, alternative work arrangements would be allowed, such as four-day workweek.

Roque said the goal was to improve the situation in different parts of the country to allow them to exit from strict lockdown.

The strategy involves testing people for the new coronavirus, tracing their contacts, and treating patients.