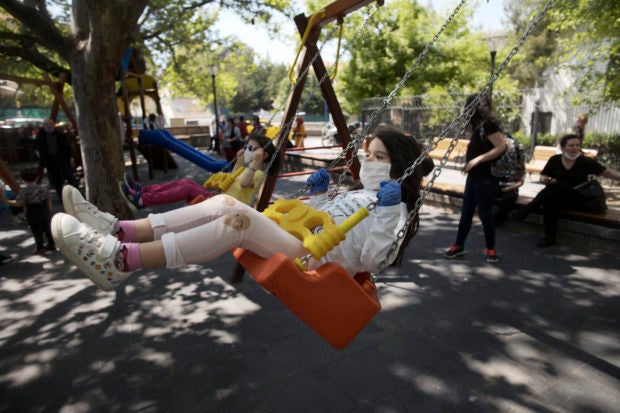 Children wearing face masks for protection against the coronavirus, play on swings in Kugulu public garden, in Ankara, Turkey, Wednesday, May 13, 2020. Parks filled with the sound of children as Turkey allowed those aged 14 and under to leave homes for the first time in 40 days. The country’s youngest population was allowed to venture out for four hours between 11:00 am and 3:00 pm on Wednesday as Turkey eased some restrictions in place to fight to coronavirus outbreak. (AP Photo/Burhan Ozbilici)

ANKARA, Turkey — Parks filled with the sound of children on Wednesday as Turkey allowed kids ages 14 and under to leave homes for the first time in 40 days.

The country’s youngest population were allowed to venture out for four hours between 11 a.m. and 3 p.m. as Turkey eased some restrictions in place to fight the coronavirus outbreak. Youngsters between the ages of 15 and 20 will be able to leave homes for a few hours on Friday, while senior citizens were briefly allowed out for the first time in seven weeks on May 10.

In the capital Ankara’s main park, Kugulu Park (or Swan Park), young children wearing masks took turns going down slides and on swings. An adjacent street teemed with people and police called on the public to abide by social distancing practices.

“The weather is beautiful. This was a great opportunity because we were so bored at home,” said Zeyda Ozdemir, who brought her 8-year-old daughter, Zeynep, to the park.

She added, however, that she felt “a little uneasy” because the park was more crowded than she had hoped it would be.

In the city’s Birlik Mahallesi neighborhood, two children were seen riding their scooters up and down a street while a voice from a loudspeaker on the top of the minaret of a nearby mosque called on the public not to be “fooled by the arrival of spring and good weather.”

“The danger of infection is not over yet,” the announcement said.

The government set forth a “normalization plan” as the number of confirmed coronavirus cases have dropped, but warned of tougher measures if infections go up again. Malls, hairdressers, barber shops and hair salons were allowed to open Monday.

Meanwhile, a lawyer told The Associated Press that he has filed a lawsuit against China on behalf of a private company that is seeking compensation from the country for financial losses suffered because of the coronavirus outbreak.

Lawyer Melih Akkurt said the company was forced to suspend operations during lockdowns. It is the first commercial lawsuit in Turkey against China, where the coronavirus pandemic began, Akkurt said.

The lawyer wouldn’t name the company, saying it wanted to remain anonymous. Other companies were preparing to file similar lawsuits, he said.

The lawsuit holds China responsible for economic losses, accusing it of among other things, failing to provide timely and accurate data to the World Health Organization, of concealing information on the virus’ infectiousness, of silencing doctors and not preventing its spread.

“My client believes there was intent rather than negligence by China,” Akkurt said.

China rejects accusations of a cover-up or of not responding to the outbreak in a timely manner.

Turkey has recorded more than 140,000 cases of the virus and nearly 4,000 deaths attributed to COVID-19, according to a tally by John Hopkins University. The true number is likely much higher because many people haven’t been tested, and studies suggest people can be infected without displaying symptoms.

Read Next
New Zealand barber snips away at midnight as nation reopens
EDITORS' PICK
Give anti-terror law a chance, ditch misinformation – Defense Sec. Lorenzana
Smart releases Hyun Bin’s second TVC
Military on heightened alert in Maguindanao after BIFF attacks
For nation’s birthday, Trump slams the enemies within
EuroMillions Superdraw: A lottery draw unlike any other is coming to the Philippines
Water remains our saving grace right now
MOST READ
MIAA: International flights will resume July 8
Tesla sales boosted by entry-level sedan
2 carriers in South China Sea, US bares
As Ringo Starr turns 80, he talks about his life, Beatles journey, including that unfortunate Manila experience
Don't miss out on the latest news and information.