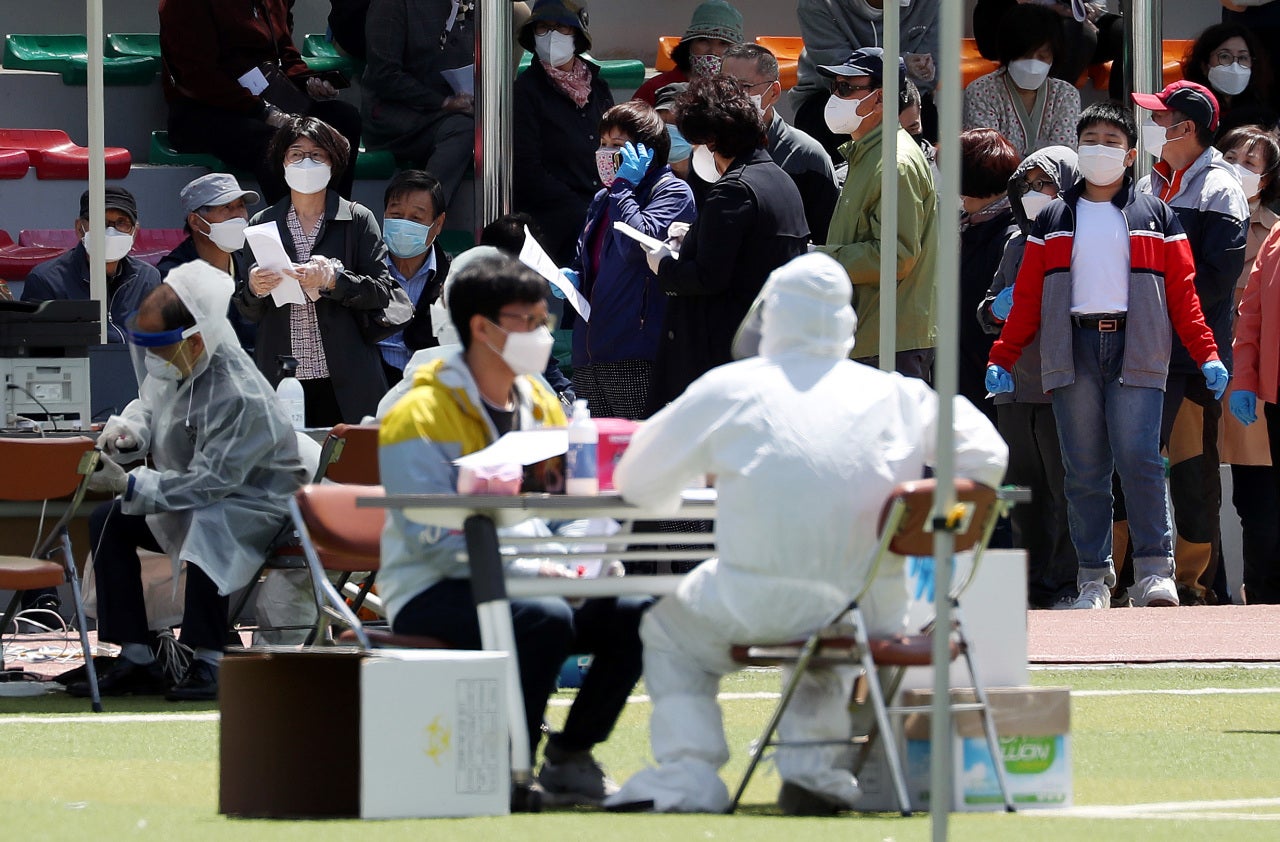 A screening center in Incheon is crowded with test takers on Wendesday, as secondary infections from the cluster of infections in Itaewon, a popular nightlife district in Seoul, continues to rise there. (Yonhap) via The Korea Herald

SEOUL — Secondary infections from a COVID-19 cluster in the nightlife district of Itaewon put the country on high alert Wednesday, with experts expressing deep concern over the speed at which the virus is spreading nationwide.

From a teacher at an after-school private academy to a high school senior, a public health doctor in North Jeolla Province and a clubgoer residing in Busan, the wide range of individuals who visited the area in late April and early May have become part of a surge in infections.

Thwarting Korea’s hopes for a safe return to normalcy, the number of newly confirmed cases rose by 26 on Wednesday from a day earlier. The vast majority — 18 — were tied to the Itaewon cluster, according to the Korea Centers for Disease Control and Prevention.

“The mass infection that began at Itaewon clubs is on the rise due to voluntary testing and extensive contact tracing. As time passes, we are seeing an increase in the number of secondary transmissions,” KCDC Director-General Jung Eun-kyeong said in a daily briefing.

“Those who have come into contact vary from a 1-year-old baby to an 84-year-old elderly person. In particular, the virus is spreading to those close to (patients) such as parents, grandparents, nephews, nieces and siblings. … A delay in diagnosis could cause secondary and tertiary transmissions and exacerbate the damage.”

Jung added that it was too early to compare the Itaewon cluster with the earlier mass infections linked to a church affiliated with the Shincheonji religious sect, which morphed into the epicenter of the outbreak here.

There were a total of 119 virus patients linked with Itaewon as of Wednesday afternoon, the KCDC said, of whom 76 had been to the popular district in the cited period. The other 43 contracted the virus through secondary transmissions.

Some 22,000 people nationwide tied to the Itaewon infections have undergone testing, the agency added.

A private academy teacher in Incheon, who had visited a club in Itaewon, tested positive for the virus and went on to transmit the virus to eight people in close proximity to him.

The 25-year-old club-goer is believed to have spread the disease to a colleague in his 20s, six students and a mother of one of his students, local authorities said.

He reportedly told health authorities that he was unemployed in the early stages of survey.

The country’s military failed to insulate itself from the new wave of infections, reporting three service members of the Cyber Operations Command confirmed with the virus.

They had been in quarantine upon coming into contact with an Itaewon clubgoer staff sergeant, who tested positive for the virus, according to the Defense Ministry.

A total 11 people in the military and nine with the Cyber Operations Command have caught the virus in relation to Itaewon, so far, it added.

Forecasting more infections to emerge in the near future, 77 new recruits have notified of their visit to nightlife establishments in Itaewon.

Itaewon-linked infections also popped up in Busan, some 400 kilometers south of the capital, fueling fears about the scope of the spread of the deadly contagion.

Busan city health officials said it had four virus patients: two had visited Itaewon nightclubs and two contracted the virus through the clubgoers.

They added a 27-year-old club-goer, who is also a virus patient, passed on the virus to his father, 62, and his one-year-old nephew.

About a week left until high school seniors return to schools, a senior residing in Seoul was found to have gone clubbing.

Even though the student tested negative and was in self-quarantine, students and parents were anxious as the student had attended two in-person classes early this month with some 11 students and two teachers, the Seoul City Education Office said.