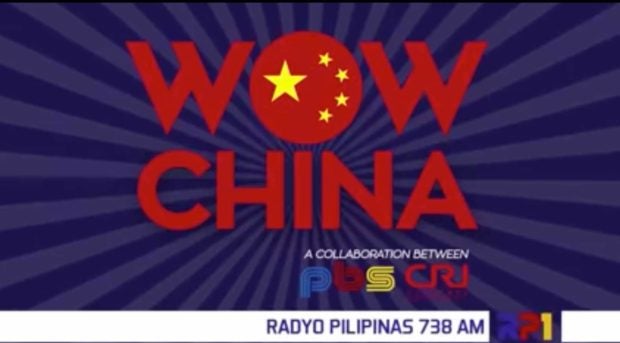 MANILA, Philippines — A two-year-old program that promotes China’s culture on the government-run radio station is triggering outrage for allegedly pushing Chinese propaganda at a time when the two countries are locked in dispute over the West Philippine Sea.

“On one hand, the government radio station is busy promoting ‘better relations and friendship’ with China. On the other hand, the Chinese government is busy establishing its foothold on our islands in the West Philippine Sea,” Gaite said.

“We’re blasting Chinese propaganda on our radio, and they’re blasting Filipino fishermen off our waters and pointing guns at our Navy.”

The show is broadcast on weekends on Radyo Pilipinas, part of Philippine Broadcast Service (PBS) under the supervision of the Presidential Communications Operations Office (PCOO).

Gaite found nothing wrong about appreciating the rich cultures of our Asian neighbors, but he said the program on government radio came across as unpleasant to many Filipinos’ ears.

Many Filipinos do not feel the government’s enthusiasm in protecting the country’s interests in the same way that it was promoting China, he said. “It’s almost treasonous, if it isn’t yet.”

The hourlong radio program on Saturday and Sunday has been airing since 2018 and is independently produced by China Radio International, Aportadera said in a statement.

He said he respected the criticisms. “Its format is light, informative, and entertaining; in no way whatsoever does it espouse or promote a particular political view or cause,” he said.

“Let’s get to know our Chinese brothers for better relations and friendship,” goes part of the program’s opening spiel in Filipino.

It features Mandarin lessons from the University of the Philippines’ Confucius Institute.

The program’s logo is dominantly red with the stars of the Chinese flag prominently displayed.

Last Sunday’s episode touched on Mother’s Day and the community quarantine to curb the spread of the respiratory disease.

The program on Radyo Pilipinas’ Facebook page has received 19,000 angry reactions, 373 likes and more than 833,000 views as of Tuesday afternoon.

Presidential spokesperson Harry Roque said the program was “part of the free marketplace of ideas,” but his office had nothing to do with it.

“Let our countrymen form their own opinion regarding that advertisement or program,” he said.

In his statement, Aportadera said PBS “recognizes constitutional freedoms and respects the views and sentiments of the public and the netizens—and their right to share these on their social media channels.”

But he called on the public “not to create confusion, cultivate fear and anger, or propagate divisiveness at a time when the country needs us to stand united.”

He said that contrary to criticisms that it is engaged in pro-China propaganda, PBS was “at the forefront of disseminating relevant news and information to and from our citizens across the archipelago–particularly during this time of crisis.”

Aportadera said “Wow China” was the result of multiple bilateral media and communications agreements between China and the Philippines meant to enhance cultural relations, information exchange and the PBS’ technical capability in broadcast and in publishing.

Sen. Risa Hontiveros questioned the use of taxpayer money for the program, which she said “promotes China’s policies.”

“For me, this is a betrayal of the Filipino people. Our state media should always place Filipinos’ interests and welfare first,” Hontiveros said in a statement.

She said the PCOO should help the Filipino people with “relevant and timely information, especially during this COVID-19 pandemic.”

“But instead, it is allowing a program that promotes China and its state ideology,” Hontiveros said.

Other critics took slammed the program on social media.

“As a taxpayer, I strongly protest that our taxes are being made to pay for this crap,” said Angelo Medina on Facebook.

“Wow! They didn’t even try to hide it. Communist China propaganda is literally right there,” said @JanOralced on Twitter.

Another Twitter user, @brunnoskin, said he didn’t understand the need for a Chinese segment on national radio.

“It’s either the government is marketing China to us or they already sold us to China,” he said.The uproar over the radio program followed the government shutdown of ABS CBN and the Chinese Embassy-produced music video, “Iisang Dagat” (One Sea), which also sparked outrage among many Filipinos who were angered by what they saw as a subtle attempt by China to assert its claims over the West Philippine Sea.

That video was meant to be a tribute to health-care workers and other front-liners in the fight against COVID-19, which originated in China.

—WITH REPORTS FROM MARLON RAMOS AND MELVIN GASCON