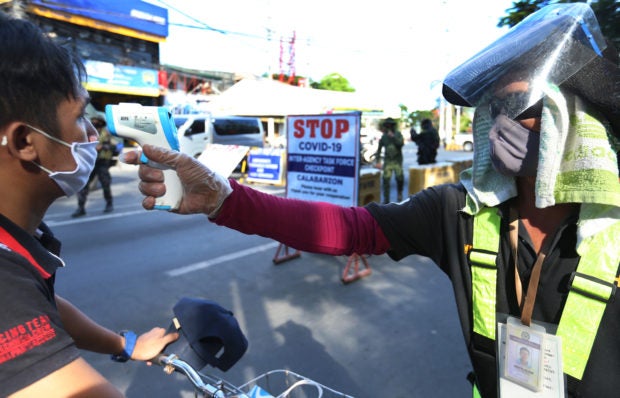 LAGUNA LOCKDOWN A police officer checks the body temperature of a man passing through a quarantine checkpoint in San Pedro City, Laguna province, which will remain on lockdown until the end of the month. —EDWIN BACASMAS

SAN PEDRO CITY, Laguna, Philippines — Local officials are scrambling to find the real score in the coronavirus infection to justify the national government’s recommendation on whether to extend or ease quarantine protocols.

On Tuesday, President Rodrigo Duterte approved the recommendation of the Inter-Agency Task Force on Emerging Infectious Diseases (IATF-EID) to place the “high-risk” communities of Metro Manila, Laguna province and Cebu City under a modified enhanced community quarantine until May 31.

But the status of densely populated provinces like Cavite and Rizal, with an equally high number of infection cases, had been downgraded to a general community quarantine, like other provinces previously placed under heavy restriction to curb the virus transmission.

Under a general quarantine, more industries will be allowed to reopen in communities classified as “low-risk” areas.

“I want to know what their basis is [for categorizing risk areas]. If they say [that it is] the number of [coronavirus] cases, we (Laguna) are not the highest, so why are we left out?” Gov. Ramil Hernandez said.

He said he would review the national government guidelines, as “I cannot appeal [a decision] for which I don’t understand the parameters.”

Since the number of cases shot up in March, the province of Rizal, at least in the Calabarzon (Cavite, Laguna, Batangas, Rizal and Quezon) region, has recorded the highest number of infection cases and deaths (343 cases and 45 deaths, as of May 11). Antipolo City alone has 117 cases and 17 deaths, according to the regional Department of Health (DOH).

The semi-industrialized province of Laguna has 327 cases, while Cavite has 234.

In Laguna, Biñan City Mayor Walfredo Dimaguila Jr. said he would appeal the IATF-EID recommendation since the city had only one patient left battling the disease.

The rest of the 26 patients have recovered, while five have died.“You know Biñan hosts two technoparks, apart from the several companies outside the economic zones. These people need to return to work,” Dimaguila said.

Sta. Rosa Mayor Arlene Arcillas will also appeal that the city be allowed to reopen more industries even under a modified lockdown.

“We cannot anymore keep on feeding the people with our funds. Ask every mayor and they’ll say the same thing,” Dimaguila said.

Filemon Sibulo, San Pedro city administrator, said the local government was preparing to release food packs with the extension of the quarantine.

Calamba Mayor Justin Marc Chipeco said the city would rather err on the side of caution.“Better safe than sorry,” he said.

Cabuyao City Mayor Rommel Gecolea said he was hoping to reopen more manufacturing industries but said it had to be done gradually “to allow ample time for [people’s] behavorial [change] since there is no vaccine available yet.”

Dr. Eduardo Janairo, the DOH regional director, said the IATF-EID based its decision on two factors—doubling time (to see if the number of cases doubles in a matter of three to seven days) and facility care utilization (reports of private hospitals on the number of COVID-19 patients seen or treated).

“But there is questionable data here,” he said.

For instance, Janairo said there were about 1,800 specimens from Cavite that were “spoiled” because they were collected and submitted during the time that testing at the Research Institute for Tropical Medicine and the Lung Center of the Philippines was scaled down.

“That’s why (Cavite’s) number went down for a time,” he said.

On the second factor, Janairo said “some hospitals, especially the private ones, have had several cases but [these went] unreported.”

Reopening communities must be targeted and studied well, he said, noting that bigger cities in Laguna, Cainta and Antipolo in Rizal, and the bigger and contiguous cities in Cavite should remain under strict restrictions.

The rest of Laguna, which is closest to Quezon province, may be reopened, Janairo said.

“We must first uplift the battleground. In fairness to those three (Rizal, Cavite and Laguna), isolation areas, the testing and [additional] facilities are already being put up,” he said.