MANILA, Philippines — A public high school teacher was arrested by the National Bureau of Investigation (NBI) after posting on Twitter that he will give a P50-million reward to anyone who would kill President Rodrigo Duterte. 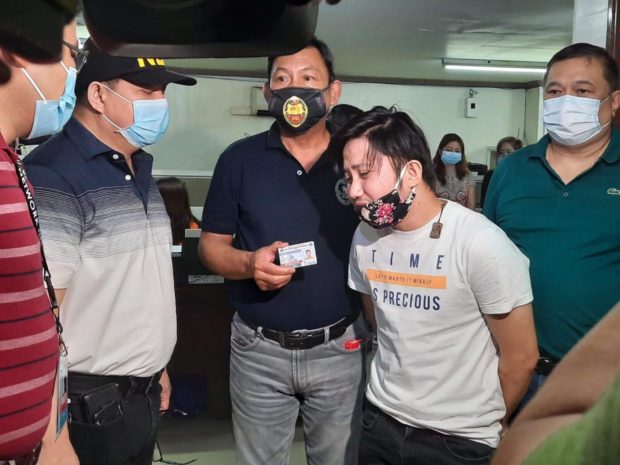 Ronnel Mas with NBI agents followng his arrest after posting on Twitter that he will give a reward of P50 million to anyone who will kill President Rodrigo Duterte. (Photo from NBI)

NBI Deputy Director Ferdinand Lavin confirmed the arrest of the teacher, identified as Ronnel Mas. He said the teacher will undergo inquest proceeding.

According to NBI officer-in-charge Eric Distor, Mas is currently teaching social studies, has completed a master’s degree, and is now pursuing a doctorate degree.

His tweet read: “I will give P50 million reward kung sino makakapatay kay Duterte (to whoever will kill Duterte).”

Distor said Mas was brought to the NBI head office in Manila and will be presented for inquest proceedings before the Department of Justice for inciting to sedition in relation to the Cybercrime Prevention Act of 2012, and for violation of the Code of Conduct and Ethical Standards for Public Officials.

A video posted on Facebook, supposedly taken by an arresting NBI agent, showed an emotional Mas who admitted to posting the incriminating post on Twitter, for which he later apologized to Duterte.

While calling his tweet a “wrong move,” Mas said he did not expect that he would be arrested over that, especially since his intention was only to “seek attention.”

According to Mas, he mentioned P50 million in his social media post to equate with the P50 million offered by Duterte for any Filipino who would be able to invent a vaccine for the coronavirus disease.

In the same video, he also denied he was forced to apologize to the President.