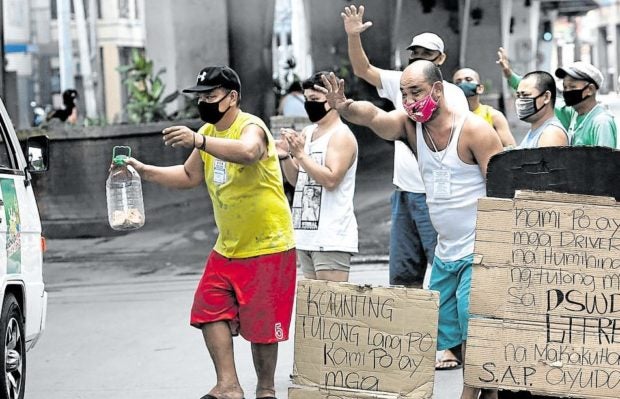 SIGNS OF THE TIMES Amid lockdown in the capital region now in its second month, a group of men identifying themselves as jeepney drivers seeks aid from motorists passing on Rizal Avenue in Manila. (Photo by MARIANNE BERMUDEZ / Philippine Daily Inquirer)

MANILA, Philippines — Nearly 2 million poor families have yet to receive cash aid from the government, a day after the final deadline for distribution set for the Department of Social Welfare and Development (DSWD) and local governments lapsed on Sunday.

Data from the DSWD showed that as of 12 noon on Monday, at least 16.1 million low-income families had so far received emergency subsidy under the Social Amelioration Program, or 89.42 percent of the 18 million target beneficiaries.

For the first installment of the P200-billion aid, at least P90.56 billion has been distributed to poor families nationwide, according to the DSWD.
Out of 1,634 local government units (LGUs), 1,008 have reported complete payout, the agency said.

Interior Secretary Eduardo Año gave a higher number. In a statement on Monday, he commended 1,265 of the 1,634 LGUs nationwide for completing the distribution of the first tranche of the cash aid.

“Your work, however, is not yet done,” Año said. “We still have the second tranche.”

Under the Bayanihan to Heal As One Act, poor families will receive cash aid ranging from P5,000 to P8,000, based on where they reside, to help them tide over the economic impact of the quarantine due to the coronavirus disease.

In Metro Manila, Taguig is one of the cities that have finished the distribution of the first tranche in all its barangays. It was able to distribute the aid to around 92,000 recipients at the payout venues.

The payout was initially expected to be completed by the end of April but had been extended to May 7, then again to May 10, after local governments failed to comply with the deadlines.

DSWD spokesperson Irene Dumlao said the agency would defer to the Department of the Interior and Local Government (DILG) whether there would be another extension of the payout of the first tranche.

In Metro Manila, however, local governments that were not able to meet the May 10 deadline have until Wednesday to finish all the payouts and proceed with the liquidation process, Director Vic Tomas of the DSWD-National Capital Region told the Inquirer.

The decision, he said, was made by the local DSWD office through a memorandum handed out on Monday.

Earlier, the department had said the second payout would depend on the submission of local governments of complete liquidation reports on the distribution of the first tranche.

Año said the DILG would start issuing show-cause orders to the LGUs that performed poorly in the distribution of the cash aid.
Failure to give a satisfactory response or explanation prompts the filing of an administrative case against them.

Año said further that 183 barangay officials were being investigated for alleged graft and corruption in the payout of the cash aid.

Civic society groups are asking the government for an easier way to flag concerns on the subsidies so that the poor could get the help they need if they did not find themselves on the list of beneficiaries.

Grouped under the Philippine COVID-19 Action Network (PHCAN), they submitted a set of proposals to the Inter-Agency Task Force on Emerging Infectious Diseases to improve the distribution and disbursement of the emergency subsidy.

According to the Action for Economic Reforms, one of the member organizations of the PHCAN, 66 organizations supported the statement, which included a grievance mechanism among its recommendations.

The government currently identifies who and where the poor are through an information management system called the Listahan, but the PHCAN said this was not updated and could have left out some vulnerable families.

It proposed that the government relax documentary requirements and instead adopt a vouching system in the community or barangay instead.

The group said a clear schedule in the barangay was needed to regulate the flow of people getting the cash aid.
“An advisory should be made well-ahead of time that will schedule claimants’ presence based, for instance, on their last names, to avoid congestion in designated payout centers,” it said.

If time permits, the PHCAN said the implementing agencies must convene with concerned parties, such as banks, finance technology companies and remittance centers, as well as agencies like the central bank and the Department of Finance to establish alternative distribution channels for cash, such as cash cards, load and e-money.

The PHCAN also urged the government to improve communication efforts to the public regarding the subsidy, through the widespread distribution of leaflets.