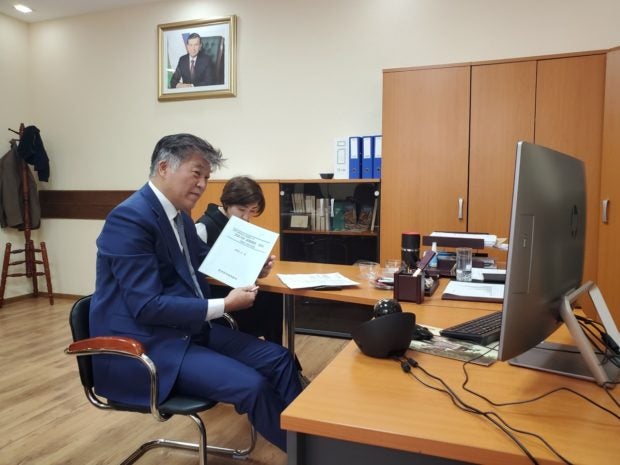 SEOUL — South Korea’s public health emergency response veteran, who was first to be dispatched overseas in March for health cooperation amid the novel coronavirus pandemic, says international cooperation is “something of an obligation” in peacetime and crisis alike.

Speaking to The Korea Herald last week at his office at Korea University College of Medicine in Seongbuk, northern Seoul, preventive medicine specialist Dr. Choi Jae-wook said he believed “helping neighbors where we can” in navigating a global health crisis was “a responsibility rather than a choice.”

Choi returned to Korea on April 26 after spending four weeks in Tashkent, Uzbekistan, during which he helped shape the country’s response against COVID-19, the infectious respiratory illness caused by the new virus.

As are most countries hit by the coronavirus, Uzbekistan is a relative novice in dealing with an outbreak of an emerging infectious disease, he said, and could benefit from borrowing a page or two out of Korea’s playbook.

“A major part of Korea’s guidelines were formed in 2015’s Middle East respiratory syndrome outbreak, and it underwent a series of updates in the past three months to keep up with the rapidly progressing situation.”

While Uzbekistan has its fair share of experience in fighting endemic diseases, COVID-19 was its first true infectious disease outbreak in recent times, he said, unlike Korea, which retains memories of severe acute respiratory syndrome, swine flu (H1N1) and MERS.

Although he has brought with him coronavirus references from the Korea Centers for Disease Control and Prevention and Korean Medical Association, Choi said their implementation has to have a basis in the local context.

“For instance, a significant proportion of Korea’s casualties occurred at nursing homes for elderly, and such care facilities with older populations have been among key areas of defense. But the case is not applicable to Uzbekistan where multigenerational households are the dominant form of living arrangement,” he said.

Choi’s role there involved consulting with health authorities on devising disease control guidance such as epidemiological investigation protocols and other action plans and strategies; holding teleconferences with the public officials, disease control agency and medical experts working with the virus patients; as well as making regular appearances on national television for risk communications.

“My itinerary was strictly limited to the Health Ministry headquarters and the hotel, which was inhabited exclusively by officials on coronavirus duty for the time being.”

Choi said he was working 10 to 11 hours a day on average, six or seven days a week.

His stay, originally scheduled for two weeks, was extended for two more weeks upon request.

“I was told Korea was the only country yet to respond to (Uzbekistan’s) calls for cooperation on COVID-19 and fly an expert there to tackle the coronavirus challenges,” he said. By the time he left, the daily tally of new cases had stabilized to hover around 50, from about 150 during its peak in mid-April.

But Choi shied away from taking credit for the improvements.

Uzbekistan, despite being a close neighbor to China — where the pandemic originated — had a late start with its first domestic case detected on March 15. Korea saw its first case nearly two months earlier on Jan. 20.

Choi attributes Uzbekistan’s success in delaying the arrival of the disease to its tight border controls.

“The Uzbek government demonstrated admirable leadership in assembling the response task force and quickly getting down to action,” he said. “One of the first things they did was limit cross-border travels and buy time for building isolation units, securing critical care equipment and obtaining the financing to do all this.”

Choi said he was contacted by the Uzbekistan authorities in mid-March both personally and through the government for COVID-19 cooperation.

Asked if he knew why they had asked specifically for him, he replied, “I think they did a bit of research into my background in health projects with the country.”

Choi’s ties to the Central Asian country date to 2016, from when he helped establish a specialized training course in environmental and human health at the Tashkent Medical Academy as the lead researcher for over three years.

The Ministry of Foreign Affairs arranged the departing trip, and Choi flew back home on a chartered flight provided by Uzbek authorities as international travels were suspended.

Choi said his commitment to public health cooperation stems from his college days.

“When I was a medical student back in the ’80s, a lot of the equipment we used was sent as part of foreign aid from countries like Germany,” he said, adding the goal of such exchanges was to allow a country to foster “a self-reliant health system.”

Choi, who serves as the chairman of the Korean Medical Association’s Scientific Review Committee, is credited for introducing the concept of risk communication here in the 2000s.

Read Next
183 barangay officials being investigated by PNP for ‘corruption’ in SAP distribution
EDITORS' PICK
Speed up your game with the new vivo Y20s [G]
Pru Life UK receives four golden arrows for solid corporate governance
Pre-order the new vivo Y20s [G] to get a free TWS earphone
WHO says not to use ivermectin on COVID-19 patients
PH’s COVID-19 active cases reach over 190k after 12k new infections reported
Harry Roque in hospital for COVID-19 treatment
MOST READ
Stop ‘creeping occupation’ of ‘militia’ boats in WPS, Pacquiao asks China
Bea Alonzo clarifies status of her relationship with Dominic Roque
Convicted former aide of Sen. Bong Revilla dies — BuCor
Locsin to China: ‘Then move out’
Don't miss out on the latest news and information.