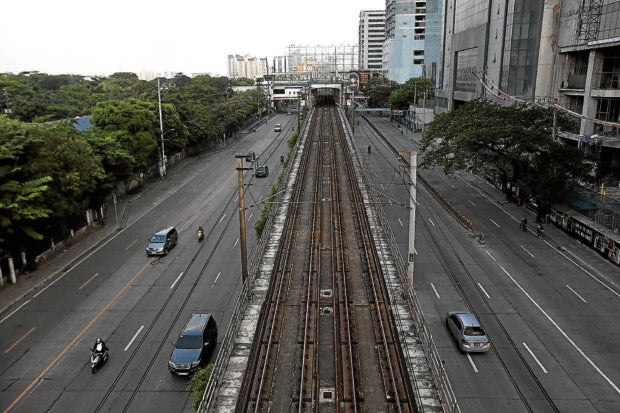 THE ROAD LESS TRAVELED NOW The beltway Edsa on Sunday afternoon, days before the second extension of the lockdown in Metro Manila is supposed to be lifted. —RICHARD A. REYES

MANILA, Philippines — Transport officials will allow only “a single bus route dedicated to Edsa” out of 61 existing routes once quarantine rules are relaxed after May 15 as part of efforts to streamline bus operations, the chair of the House transportation committee said on Sunday.

Only 29 bus routes out of the 96 existing ones in Metro Manila will be given special franchises when the capital transitions from lockdown to general community quarantine, Samar Rep. Edgar Mary Sarmiento said.

All new routes will be “dedicated and nonoverlapping,” based on the decision of the Land Transportation Franchising and Regulatory Board (LTFRB) that was relayed to Sarmiento’s committee during an online hearing last week.

LTFRB Chair Martin Delgra told the committee that the board decided to seize the opportunity to rationalize all land transport systems and shorten routes to allow faster turnaround of buses and other public utility vehicles.

Delgra said the rationalized routes would replace the old ones not only during the quarantine period but also beyond as part of the effort of the Department of Transportation (DOTr) to reform Metro Manila’s outdated public transport system.

“Part of that is having to improve the efficiency of our public transport system. What has happened in the last 30 or 40 years, the model of bus franchises is no longer relevant today and we have been saying that even at the start of this administration,” he added.

Under the plan, one of the 29 rationalized routes will span the entire belt highway Edsa, a stretch of 23.8 kilometers from Monumento at Caloocan City in the north to Baclaran near SM Mall of Asia at Pasay City in the south.

Only buses plying the Monumento-Baclaran route would be able to use the single Edsa route.

All other destinations accessible through Edsa would be served by buses that would ply separate dedicated routes. This means commuters will not be able to take a bus on Edsa to go to places like Alabang in Muntinlupa City directly. They will have to change buses to get to Alabang.

Bus operators in the disenfranchised routes will be absorbed into fleets for the new routes, according to the plan.

Sarmiento called the hearing to determine the government’s preparedness to provide safe transportation that was in compliance with the social distancing requirement set by the government’s coronavirus response task force.

He expressed support for the LTFRB’s move, noting that the plan was identical to his proposal for a “centralized and synchronized bus dispatch system” in Metro Manila.

“For me, it is really the right time to reform the land [transport] sector. I will be supporting you but I’m hoping that you will plan it well and execute it well,” Sarmiento said.

“The most important here is for the public to have the transportation system that they need come [quarantine],” he added.

Sarmiento called on the DOTr to conduct a dry run of the new system at least two days before May 15.

No bus operators could be reached for comment on Sunday.

Metro Manila and the rest of Luzon have been on lockdown since mid-March due to the new coronavirus pandemic. The restrictions include a ban on public transportation as part of movement curbs to prevent the spread of the coronavirus that causes the severe respiratory disease COVID-19.

DOTr officials said they were ready to lift the ban on public transport in Metro Manila once the lockdown was lifted, except for jeepneys and motorcycle taxis.

Jeepneys, however, may be allowed in some areas that cannot be served by buses and tricycles, according to the officials.

The new plan could further reduce the profitability of bus operation. Bus operators are already facing reduced income with the cut in capacity imposed by the government to enforce social distancing aboard vehicles to suppress the spread of the coronavirus.

Capacity reduction will also be imposed on jeepneys and other public utility vehicles during the quarantine.

The LTFRB, however, is not approving fare increases to make up for the reduced capacity. But the DOTr is working on a stimulus package to mitigate the loss of income in the public transportation sector.