Cebu City ranks second among five highest in infections but lowest in death rate
Philippine Daily Inquirer / 04:19 AM May 11, 2020 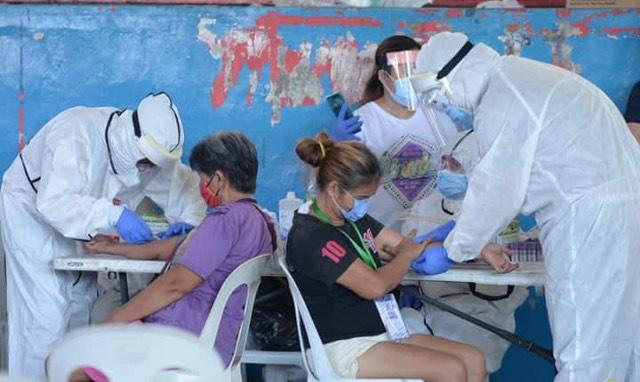 MASS TESTING Residents of Cebu City undergo mass testing, the result of which will determine if it can transition to general community quarantine by May 21. —CEBU CITY PUBLIC INFORMATION OFFICE PHOTO

CEBU CITY, Cebu, Philippines — Cebuanos should not be alarmed by the rise of new coronavirus disease (COVID-19) cases in Cebu, the highest outside Metro Manila, since the island has the lowest death rate from the disease in the country, according to a top government official.

“I can understand the fear of our kababayan (countrymen) in Cebu when you see a number like 1,385, 1,400 then 1,500 etc. What we have to understand is this: The most important thing to look at now is how the communities prepare to control the spread of the virus,” said Vivencio Dizon, deputy chief implementer of the government’s coronavirus response.

But based on records, Cebu had a mortality rate of less than 1 percent compared to the top four Metro Manila cities whose mortality rates ranged from 6 percent to 8 percent. Metro Manila is currently the epicenter of the coronavirus outbreak in the Philippines.

“So while those numbers are scary when you look at them, what we have to look at is really how the communities respond. And I think, for the entire country, we greatly benefited from the immediate response of the President to lock down very early and to stop flights from China as early as February,” Dizon said.

The official visited Cebu upon the invitation of Presidential Assistant for the Visayas Michael Dino, four days after the start of the strategic mass testing in the cities of Cebu, Mandaue and Lapu-Lapu.

The strategic testing aims to cover 10 percent of the total number of households in each barangay of the three cities.

Dizon believed that local officials and health authorities were doing a good job in keeping the number of fatalities low. He noted that local hospitals taking care of COVID-19 patients were only operating 40 percent of their total capacity since most of those infected showed no symptoms of the disease.

Aggressive testingDizon, however, emphasized that Cebu should not let its guard down and continue to “test and test more aggressively.”

He said the subnational testing laboratory at Vicente Sotto Memorial Medical Center (VSMMC) in Cebu City would soon be upgraded to enable the hospital to conduct 3,000 to 3,500 tests a day from the current 200 to 500 tests.

In Eastern Visayas, all swab samples taken from suspected COVID-19 patients would be tested at the Eastern Visayas Regional Medical Center (EVRMC) in Tacloban City starting May 11 instead of sending these to the VSMMC.

The EVMRC’s testing center would examine 90 swab samples on Monday, the majority of which were taken from individuals in Tarangnan town, Samar province, said Dr. Minerva Molon, DOH regional director.

Tarangnan is considered the epicenter of COVID-19 in Eastern Visayas with 14 cases. The entire region only has 19 cases so far.