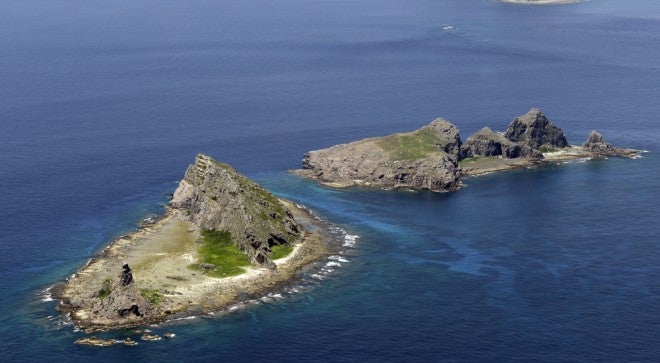 In this Sept. 2012 photo, the tiny islands in the East China Sea called Senkaku in Japanese and Diaoyu in Chinese are seen. The Chinese Defense Ministry on Saturday, Nov. 23, 2013, issued a map of an East China Sea Air Defense Identification Zone that includes a chain of disputed islands also claimed by Japan, triggering a protest from Tokyo. AP

Japan lodged an official protest with China over the incident — which took place on Friday — via a call to the Chinese Embassy in Tokyo by Shigeki Takizaki, head of the Japanese foreign ministry’s Asian and Oceanian Affairs Bureau, local media reported.

There was also a call from the Japanese Embassy in Beijing to the Chinese Foreign Ministry, media said.

Contacted by AFP, the Japanese foreign ministry could not immediately confirm the reports.

The flashpoint islands, called Senkaku in Japan and known in China as the Diaoyus, are at the centre of a festering row between Tokyo and Beijing.

The Japanese government has long complained about China’s routine dispatch of its coast guard ships to waters surrounding the islands.

On Friday the Japan Coast Guard ordered the Chinese vessels to leave the waters, and deployed several patrol ships to safeguard the fishing boat, whose three crew members were unhurt, a coast guard spokesman told AFP.

Two “Chinese ships loitering around the islands are still inside the Japanese territorial waters,” he said Sunday, adding “the fishing boat is not in a dangerous situation”.

Relations between Japan and China deteriorated in 2012 when Tokyo “nationalised” some of the  disputed islets.

Since then, the two top Asian economies have taken gradual steps to mend fences but relations at times get tense.

Read Next
Cavite to test 1,100 a day for COVID-19 after university lab gets green light
EDITORS' PICK
Reignite your passion with the vivo Y35
Karding damage to infrastructure at P23M
Bongbong Marcos says PH ‘open for business’ with new Clark Airport terminal
UNFPA Philippines Career Opportunities
Sierra Madre stands up to Karding, but needs protection vs the humans it saves
House energy committee chair Arroyo bats for cheap electricity
MOST READ
Angelica Panganiban ‘duguan, sugatang mom’ one week into breastfeeding
Badoy not with Office of the President, NTF-Elcac, under Marcos admin — solon
LPA enters PAR, may develop into tropical depression
Cop yields after killing wife, companion in Oriental Mindoro
Don't miss out on the latest news and information.