Palace: Parts of Metro Manila may remain under ECQ

MANILA, Philippines — Only certain parts of the National Capital Region, which accounts for the majority of the COVID-19 cases in the country, may be placed under general community quarantine (GCQ) after May 15, according to presidential spokesperson Harry Roque.

The other areas in the metropolis, which is composed of 16 cities and one municipality, will remain under the more restrictive enhanced community quarantine (ECQ), Roque said at the Laging Handa briefing on Saturday.

The decision by the Inter-Agency Task Force for the Management of Emerging Infectious Diseases (IATF-EID) would depend on the severity of the contagion in specific localities, he explained. 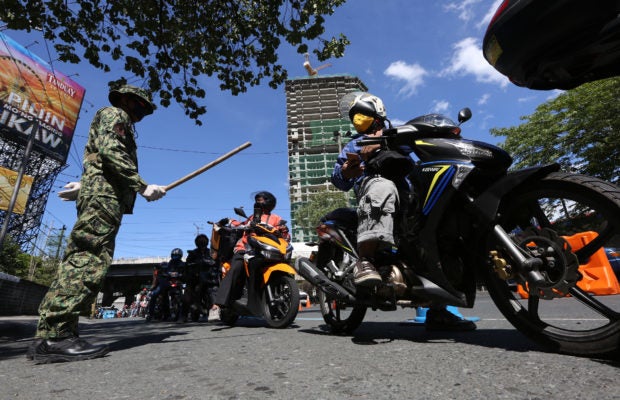 No final decision yet

Roque reminded the public of Interior Secretary Eduardo Año’s pronouncement that localities with a high number of cases would not be placed under GCQ.

The Department of Health (DOH) reported that Metro Manila has 6,916 cases with 506 deaths and 1,316 who had recovered from the severe respiratory disease as of Saturday.

The IATF-EID will submit its recommendations on which places the ECQ may be lifted to President Duterte on Monday, Roque said.

The President extended the monthlong ECQ in Metro Manila from May 1 to May 15.

Sen. Richard Gordon, who also heads the Philippine Red Cross, said he preferred a selective lifting of the ECQ.

In a radio interview on Saturday, he said he would rather have the reopening of the places under quarantine done “slowly but surely.”

“I would be very, very selective,” Gordon said.

He noted that Manila, for instance, still had a lot of cases.

Ramping up mass testing, including by the Red Cross, is crucial to determining if the country had flattened the curve, or had contained the spread of the new coronavirus, Gordon added.

Sen. Sherwin Gatchalian urged local governments to pass ordinances specifying their own guidelines for the “new normal” ahead of the lifting of the lockdown.

The guidelines could include prohibitions on mass gatherings, and the continued observance of physical distancing, Gatchalian said.

The 17 mayors comprising the Metro Manila Council met on Saturday to discuss the level of quarantine they wanted for the capital after the lapse of the extended ECQ but they could not agree on a single recommendation to the IATF-EID.

Instead, they decided to let the task force decide on one of three options that they had “unanimously agreed” to present to the ad hoc government body in charge of measures to contain the contagion, according to Jojo Garcia, general manager of the Metropolitan Manila Development Authority.

The first option was to extend the ECQ until May 30. The second was the more lax GCQ, and the third was a “modified” GCQ where local executives would be authorized to lock down certain barangays when necessary.

A barangay with “too many cases” would be locked down, Garcia explained. “If there are barangays where there are no new cases we can reopen them.” he said.

But because Metro Manila is one contiguous area, “you can’t just lock down one city, [so] this could be hard to implement,” Garcia said.

Representatives of the Philippine National Police and the DOH attended the meeting. 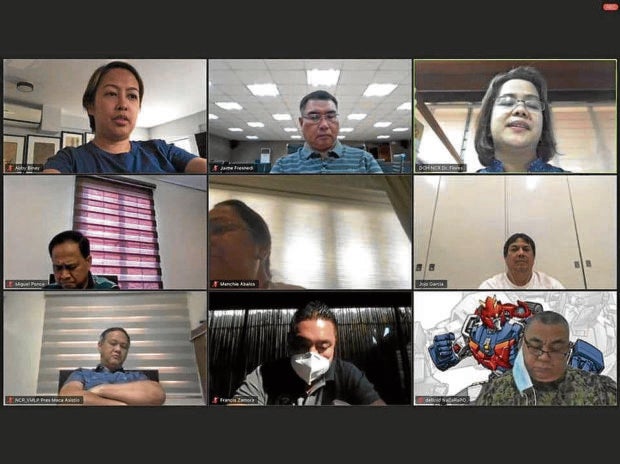 CONTIGUOUS CITIES Mayors sitting as members of the Metro Manila Council meet via Zoom for five hours on Saturday to discuss the level of quarantine restrictions that may be imposed on the national capital after May 15. Also taking part in the online meeting are police and health department officials. —SCREENSHOT COURTESY OF THE METROPOLITAN MANILA DEVELOPMENT AUTHORITY

Earlier, it was thought that the council would decide on only one recommendation. But balancing public health and the economy proved challenging for the mayors, who were forced to reckon with the reality that “some people may not be dying of the virus, but they will be killed by hunger,” Garcia said.

Mayor Joy Belmonte of Quezon City, the hardest-hit locality in Metro Manila with 1,523 cases, wanted her city to be allowed to shift to a “transition period” toward GCQ after May 15.

“While the health of our residents remains our primary priority, we also need to look after the local economy, which has been affected severely by the dreaded virus,” Belmonte said.

She said certain measures would be put in place for the health and safety of workers and customers before local businesses were allowed to operate again.

They include requiring establishments to check the state of health of their employees prior to their return to work, facilitating testing and quarantining of workers as needed, thermal scanning and social distancing in the workplace and scheduling disinfection.

There would be daily cleaning by the staff plus a whole day closure for a more thorough disinfection by the local government.

Local businesses will also be required to report their production capacities and workforce requirements.