MANILA, Philippines — The National Task Force to End Local Communist Armed Conflict (NTF-ELCAC) on Friday stirred a storm of heated discussions on social media as it posted on its Facebook page “key points” about the shutdown of  ABS-CBN.

It even warned the public about how the Communist Party of the Philippines-New People’s Army-National Democratic Front (CPP-NPA-NDF) is allegedly using the issue of the media network to discredit the government. 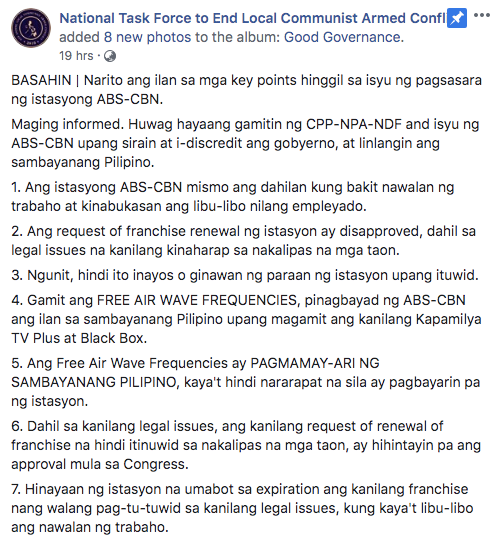 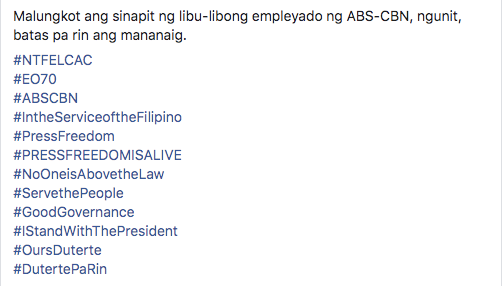 (Be informed. Do not let the CPP-NPA-NDF use the issue of ABS-CBN to disparage and discredit the government, and to sway the Filipino people.) 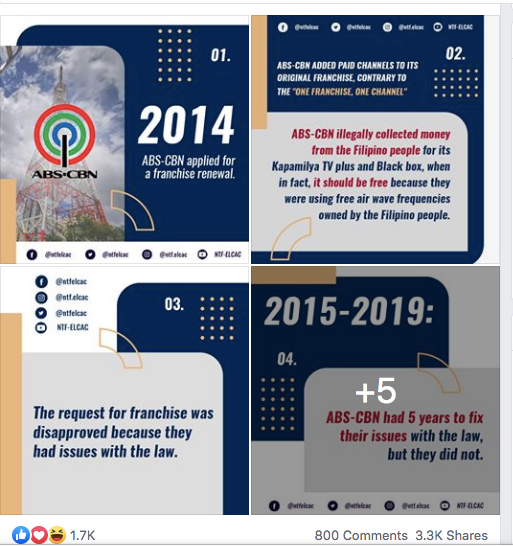 The post, which has now been deleted, was also allegedly shared by the Facebook page of the Presidential Communications Operations Office (PCOO).

But PCOO Secretary Martin Andanar said that the sharing of such content on his office’s official page was “done without the usual vetting process.”

“That being said, the posted content is not in any way an official statement or an opinion of the PCOO,” he said in a statement. “The issue regarding ABS-CBN Corporation’s network franchise remains within the purview of Congress.”

The Office of the Presidential Spokesperson (OPS), likewise, said in a separate statement that the task force’s posts did not come from their office nor from the NTF Strategic Communications, which is headed by OPS.

“Hence, [this is] not the official statement of our Office,” OPS claimed.

The National Telecommunications Commission (NTC) ordered ABS-CBN to cease operations after its franchise lapsed on May 4.

Under Republic Act No.  3846 or the Radio Control Law, all television and radio networks must secure a franchise from Congress before it can operate.

However, at least 11 bills on ABS-CBN’s franchise renewal remain pending before the House committee on legislative franchises.