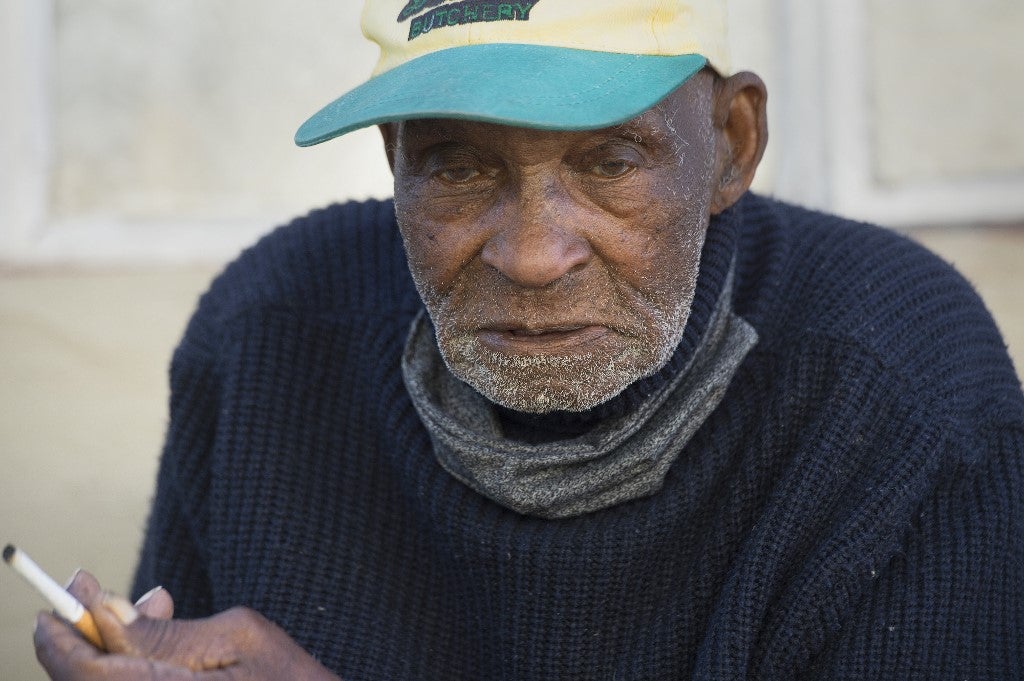 Fredie Blom enjoys a cigarette as he celebrates his 116th birthday at his home in Delft, near Cape Town, on May 8, 2020. – According to ‘Oupa’ (grandfather) Fredie and his identity card, he was born in 1904, making him one of the oldest men in the world. (Photo by RODGER BOSCH / AFP)

South African Fredie Blom celebrated his 116th birthday on Friday unfazed by the coronavirus crisis, over 100 years since the Spanish flu pandemic killed his sister.

“I have lived this long because of God’s grace,” said Blom, possibly one of the oldest men in the world.

Lighting a cigarette, he recalled the 1918 pandemic that left tens of millions dead worldwide including his sister.

Blom was born in 1904 in the rural town of Adelaide, tucked near the Great Winterberg mountain range of South Africa’s Eastern Cape province.

He is older than a 112-year old British resident named the world’s oldest living man by the Guinness World Records in March. Blom’s age has not yet been verified by the body.

Grandchildren whizzed around as Blom sat on the front yard of his home. Neighbors arrived soon after to sing happy birthday.

Blom has spent most of his life working on farms around Cape Town. He met his 86-year old wife Jeanette at a dance and won her heart over with his jive moves.

The couple has been married for almost fifty years. They moved to the Cape Town suburb of Delft three decades ago.

At his great age, however, he says he won’t let the coronavirus pandemic panic him.

And he did not mince his words about South Africa’s President Cyril Ramaphosa, complaining about a nationwide ban on cigarette sales as part of a series of lockdown measures.

“He doesn’t know what he’s doing,” Blom grumbled, adding that cigarettes were his only birthday wish this year.

Blom stopped visiting doctors more than two years ago, claiming he was tired of being pricked and prodded.

“Now he just takes two Disprins a day, but sometimes he steals my pills,” Jeanette said, laughing affectionately at her stubborn husband.

While Blom never had children, he adopted Jeanette’s two from a previous marriage as his own.

“He has done everything for us,” said Blom’s step-daughter Jasmien Toerien, 38.

“He would wake up at three or four in the morning to cycle to work,” she fondly recalled. “He loves animals and gardening.”