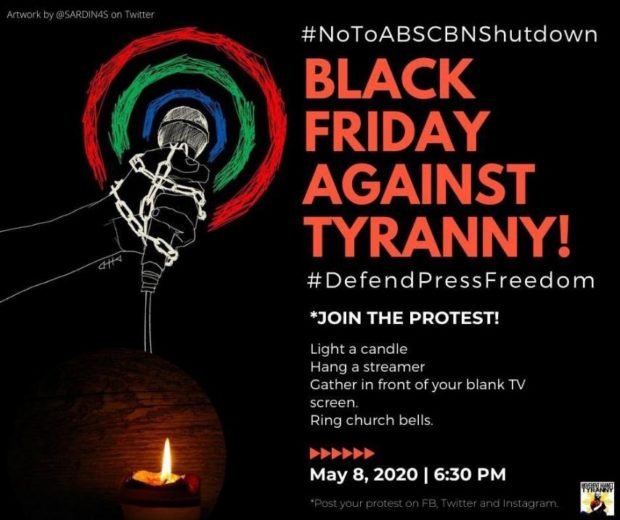 MANILA, Philippines – An online Black Friday protest will be held on May 8 to condemn the recent shutdown of network company ABS-CBN, activist group Bagong Alyansang Makabayan (Bayan) said on Thursday.

Bayan secretary-general Renato Reyes said in a message to reporters that the protest start with an online rally at 5:00 p.m. on Friday, which will be followed by other programs led by other progressive movements like the Movement Against Tyranny and the National Union of Journalists in the Philippines (NUJP).

The groups also urge churches to ring their bells in support of press freedom, and to slam the cease-and-desist order from the National Telecommunications Commission (NTC).

Aside from these, artists and other individuals would also be broadcasting on Facebook using a black screen.

A day after ABS-CBN’s franchise expired last May 4, NTC issued the order despite other broadcasting franchises being given leeway while their franchises were still being deliberated by Congress.

NTC noted that there were certain questions to the validity of ABS-CBN’s franchise, hence the cease-and-desist order.