MANILA, Philippines — A petition filed by media network ABS-CBN on Thursday asked the Supreme Court to temporarily stop the implementation of the cease and desist order issued by the National Telecommunications Commission (NTC).

The cease and desist order was issued by NTC last May 5, a day after the network’s franchise has lapsed.

ABS-CBN immediately stopped its operation in compliance with the NTC order, which Justice Secretary Menardo Guevarra said is immediately executory.

In its 46-page petition for certiorari and prohibition, the country’s largest broadcast network asked the high court to set aside the NTC’s order and issue a permanent injunction against its implementation, saying that the regulatory body committed grave abuse of discretion when it issued the controversial order to stop broadcasting after its franchise expired.

“Instead of issuing a provisional authority, the NTC, in bad faith, issued cease and desist order against ABS-CBN. It did exactly the opposite of what it was expressly enjoined to do, and it maliciously reneged on the representations Commissioner Gamaliel Cordoba made to the House Committee. This is grave abuse of discretion amounting to lack of jurisdiction,” read the petition.

The network was referring to the March 2020 congressional hearing where Cordoba said that the NTC will follow the advice of the Department of Justice (DOJ) to allow its continuous operation based on equity.

Justice Secretary Menardo Guevarra had then advised the NTC to allow ABS-CBN to operate in accordance with law and equity. 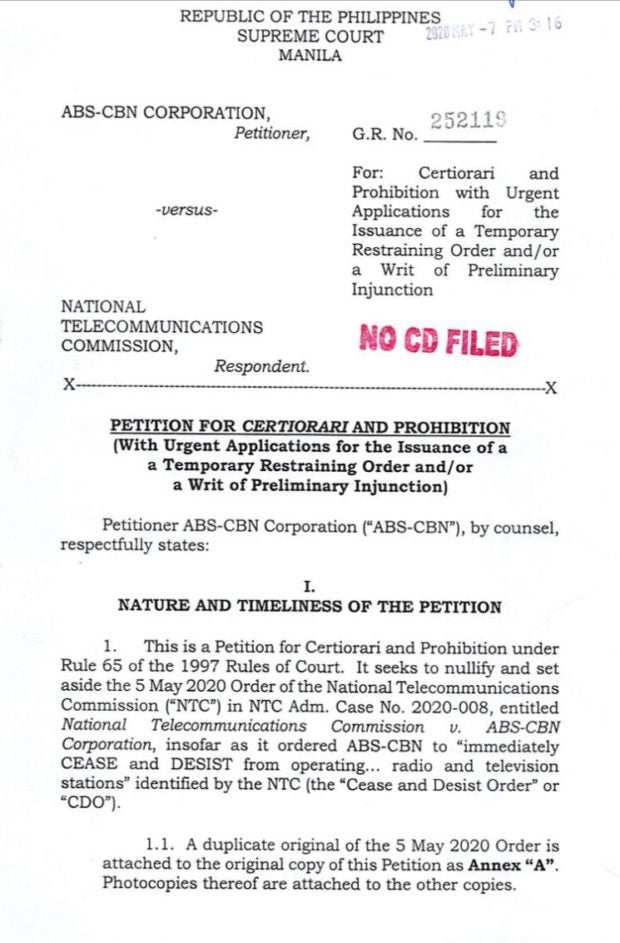 But the NTC issued the shutdown order, two days after Solicitor-General Jose Calida warned that a provisional authority to operate will open a prosecution for graft.

“The NTC’s bad faith, malice, and underhandedness are simply shocking and abhorrent,” ABS-CBN said in its petition.

ABS-CBN also invoked the rule on the equal protection of the law, pointing out that the NTC broke its own precedent when it issued the desist order instead of deferring to Congress and issuing a provisional authority to allow it to continue its operations.

It pointed out that in the past, it had allowed broadcast entities with an expired franchise to continue operation pending renewal of their franchise in Congress.

“Commissioner Cordoba himself admitted that the NTC has previously allowed legislative franchise holders to continue operations notwithstanding the expiry of their franchises, the petition said, adding the NTC chief made this during the hearing of the Senate committee on public services hearing last February chaired by Sen. Grace Poe.

“There is no reason why the same practice should not be applied to ABS-CBN,” it added.

It added that the NTC even issued the order without any prior notice or hearing ignoring the damage it could cause to the network and its employees.

“The cease and desist order also violates the right of the public to information and is a curtailment of the freedom speech and of the press. Strong public interest and equity demand that ABS-CBN is allowed to continue its operation,” it said, adding there is no urgent or paramount need for the issuance of the cease and desist order.

“On the contrary, it is the closure of ABS-CBN that will cause serious and irreparable damage not only to ABS-CBN but, more importantly, to the public interest. ABS-CBN has more than 11, 000 employees and its closure will jeopardize the livelihood not only of such employees but also of their families,” the petition further stated.

The shutdown order, according to the network was also issued while the country is struggling with the COVID-19 pandemic. The NTC itself, in a memorandum order issued March 16, 2020, announced that “all subsisting permits, permits necessary to operate and maintain broadcast and pay-TV facilities nationwide expiring within the quarantine period shall automatically be renewed and shall continue to be valid 60 days after the end of the government-imposed quarantine period.”

With the shutdown order, the government will also lose a significant source of revenues, noting that from 2016 to 2019, it has remitted to the government income tax payments amounting to at least P14.3 billion.

“This does not include withholding taxes remitted by ABS-CBN for its employees and talents,’ it added.

It added that its closure would also deprive the public of one of the leading sources of news and entertainment, thereby impairing their constitutional right to information on matters of public concerns.

“ABS-CBN has also raised P237 million for COVID response and each day that it is off air limits its capacity to raise further assistance. To close ABS-CBN now when it is most needed would certainly be detrimental to the public. Moreover, ABS-CBN cannot be closed without compromising the fundamental guarantees of freedom of speech and press,” it said.

ABS-CBN also filed an urgent motion asking the SC to hold a special raffle so that the petition may be assigned immediately to a division.