The human rights risks of ECQ 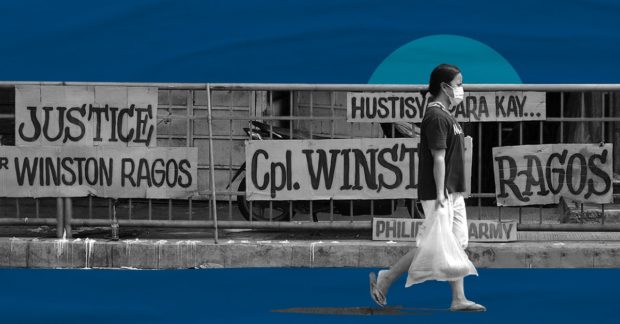 Reports of alleged abuses by law enforcers in the implementation of enhanced community quarantine (ECQ) have surfaced weeks into the Luzon-wide stay-at-home order meant to stop transmission of SARS Cov2, the virus that causes COVID-19.

In early April, Duterte himself had warned leftist groups and violators of the ECQ that there would be no hesitation on his part to order soldiers and the police to shoot and arrest them — an order which then-presidential spokesperson Salvador Panelo was quick to defend as “not a crime.”

The President’s rant, however, was followed by actual cases of abuse at ECQ checkpoints which may, or may not be, directly attributable to Duterte’s off-the-cuff remarks.

The killing of Winston Ragos, 34, became national news in April after he was fatally shot by Police Master Sergeant Daniel Florendo at a quarantine checkpoint. Ragos was a retired soldier and suffered from post-traumatic stress disorder (PTSD), which was likely the result of his exposure to the blood and gore of war, especially on communist rebels.

On April 21, Ragos left his home carrying a sling bag which his family said contained only a water bottle, quarantine pass, ATM cards, medicines and pictures of his wife and daughter. Ragos would later on be shot dead by Florendo at an ECQ checkpoint along Maligaya Drive at Barangay Pasong Putik in Quezon City following an altercation.

According to the Quezon City Police District, Ragos approached Florendo and four police trainees at the checkpoint and allegedly started shouting. The police officers asked Ragos to go home, but the retired soldier refused. Police alleged that Ragos had a .38 caliber gun inside his sling bag, which supposedly prompted Florendo to draw his own gun and ask Ragos to surrender. The police report added that Florendo was compelled to shoot Ragos when the former soldier allegedly pulled out a handgun.

Videos of the confrontation that circulated online showed Florendo pointing a gun at Ragos, who stood on a sidewalk. At one point, Ragos looked as if he was pulling something out of his sling bag, at which point Florendo opened fire, hitting Ragos twice in the torso. In his last moments, Ragos managed to take off his bag and throw it at the police officers before dropping to the ground.

Authorities believed to be from the Office of the Mayor’s Task Force Disiplina in Quezon City also drew public ire recently when they were found dragging and beating fish vendor Michael Rubuia for having failed to wear a face mask and carrying a quarantine pass while hawking outdoors.

A video of the incident, which occurred along Panay Avenue at Barangay South Triangle, Quezon City, made the rounds online the previous week and showed local authorities dragging Rubuia to an L300 van while another man beat him with a wooden stick. The local government of Quezon City launched an investigation following the incident, which saw the 60-day suspension of the enforcers involved. Rubuia was released from detention on April 30.

A stick was used yet again in another incident on April 28, this time by Cpl. Albert Aquino, to hit an unidentified 13-year-old boy along Liwanag Street in Barangay Old Balara, Quezon City.

The boy, along with a group of minors, was reportedly playing a game involving coins along the street when Aquino and barangay officials enforcing lockdown protocol approached them. The other minors were able to escape except for the 13-year-old boy, who was hit in the back with a stick by Aquino, and suffered injuries.

The police have said that the boy was injured in the back when he accidentally slipped as he was fleeing. But the boy’s mother went to the Batasan police station to complain about Aquino using a baton to whack her son.

The victim’s mother has decided against suing Aquino and the barangay officials. Aquino has also been relieved of his duty and has been assigned to administrative work. Following the incident, Philippine National Police Chief Gen. Archie Gamboa reminded his police officers that being tired is not an excuse to forget police operational procedures.

Back in March 25, just more than a week after the beginning of the ECQ, a police officer from the Manila Police District was also caught on video hitting a man with a stick. The man was reported to be a resident of the Golden Mosque Compound in Quiapo, a heavily populated district in Manila.

In the video, a policeman, who has been confirmed as MPD Station 3 head Lt. Col. Reynaldo Magdaluyo, can be heard warning people that those caught outside of their houses during the quarantine would be shot.

At one point, Magdaluyo asked a man, who had a handkerchief tied around his face, why he was outside. The man showed his quarantine pass, but Magdaluyo replied, “So what? Are you supposed to use that right now?” before swearing and hitting the man with a stick.

The MPD had said in a statement it would not tolerate “any wrongdoing of any of our policemen while strictly implementing the enhanced community quarantine.” MPD chief Brig. Gen. Rolando Miranda also said he would remind his police officers to be “polite in discharging their duties.”

There was also the case of Noel Japlos, barangay chair of San Isidro in Parañaque City, who was accused of “torturing” curfew violators by making them sit in the sweltering heat for an hour.

Japlos, in a now-deleted Facebook post on March 23, uploaded photos of several people who reportedly violated the 24-hour curfew. In the photos, the people can be seen sitting on monobloc chairs under the heat of the sun, separated a meter apart, on a court.

Some netizens at the time commented on Japlos’ post, accusing him of torture. Japlos, however, was quick to clarify the following day that the violators were not punished, but were in fact only asked to stay outside the barangay hall to maintain social distancing while their names were being listed.

Punishment by sexy dancing and kissing

Another incident in early April saw curfew violators in Barangay Pandacaqui in Mexico, Pampanga province, ordered to dance provocatively and kiss each other in the lips. The act was reportedly streamed live on Facebook from what appeared to be the personal account of Pandacaqui’s barangay captain, Christopher Bombing Punzalan, but has since been deleted.

The incident was seen as an affront to members of the Lesbian, Gay, Bisexual, Transgender (LGBTQIA+) community, prompting the Commission on Human Rights to investigate human rights violations in the town. Punzalan eventually apologized for the punishments following backlash, according to a report in Rappler on April 7.

In light of the concerns on alleged human rights violations during the ECQ, presidential spokesperson Harry Roque said on April 19 that Palace officials would appreciate receipt of detailed information on the incidents so the proper agencies can take action. He also assured that the Department of the Interior and Local Government is committed to upholding human rights.

On April 28, however, Roque said in an exclusive interview with ANC that he does not think the possible human rights violations during the quarantine period is a concern, claiming that these are isolated cases.

“I don’t think it’s a concern because we’ve had isolated cases and none of them involve human rights [violations] and the good thing about the quarantine is that people are home, crime rates are down, and so are complaints about human rights violations,” said Roque in the report.

He said that those who feel their rights have been violated should file appropriate complaints at the CHR or the fiscal’s office, and they will be acted upon. He used the martial law imposed in Mindanao as an example, saying there has not been any widescale complaint about human rights violations.

“As I said, we’ve only had isolated cases and even in the case of martial law imposed in Mindanao, we don’t really have wide-scale complaints about human rights violations,” he claimed. “I think it’s because we have a working legal system. The police know they have to abide by the law, otherwise they can be administratively or criminally punished.”