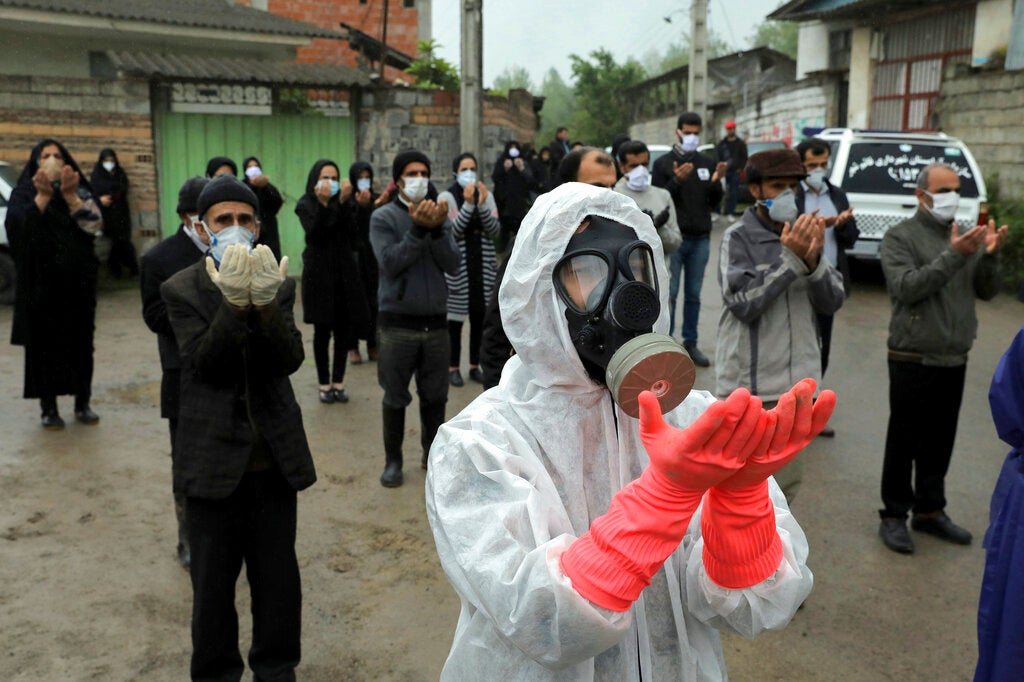 Mourners wearing protective clothing, face masks and gloves, pray over the body of a victim who died after being infected with the new coronavirus, in the outskirts of the city of Babol, in north of Iran, Thursday, April 30, 2020. (AP Photo/Ebrahim Noroozi)

Iran warned of a “rising trend” in its coronavirus outbreak on Wednesday as it said 1,680 new infections took its overall caseload beyond the 100,000 mark.

The Islamic republic has struggled to contain the Middle East’s deadliest COVID-19 outbreak since announcing its first cases in mid-February.

Concerns were raised last month about the threat of a “second wave” of the virus in a report by parliament that criticized the government’s slow response.

“We are witnessing a rising trend in the past three or four days, which is significant,” health ministry spokesman Kianoush Jahanpour told a televised news conference.

The rise was “based on our behavior, especially in the past two weeks, considering that a part of society has apparently had a change of attitude,” he added.

The newly reported infections brought the country’s overall number of confirmed cases to 101,650.

On Saturday, Iran’s official tally of daily infections hit its lowest level since March 10, but cases have picked up again since then.

The health ministry’s Jahanpour said the spike in cases could be due to an increase in movement across cities and unnecessary travel.

Iran has allowed a phased return to work to revitalize its economy since April 11 and reopened mosques in parts of the country deemed to be at low risk.

Jahanpour also reported 78 new COVID-19 fatalities in the past 24 hours for the country whose virus death toll has also been creeping up since Sunday.

This brought to 6,418 the total number of fatalities officially recorded in Iran since February 19, when it announced its first two deaths in the Shiite holy city of Qom.

Out of those hospitalized, 81,587 had recovered and were discharged while 2,735 were in critical condition.

Experts and officials both in Iran and abroad have cast doubts over the country’s COVID-19 figures, saying the actual number of cases could be much higher than reported.

A report published by parliament in mid-April said the real death toll could be as much as 80 percent higher than what the government announced.

It said the officially announced figures were based only on “patients that are hospitalized with severe symptoms.”

It also said a “second wave” of the virus may come next winter, possibly without a break due to containment measures taking too long.

Palace to bishop: Stick to your role in society, don’t discourage people from wearing face masks