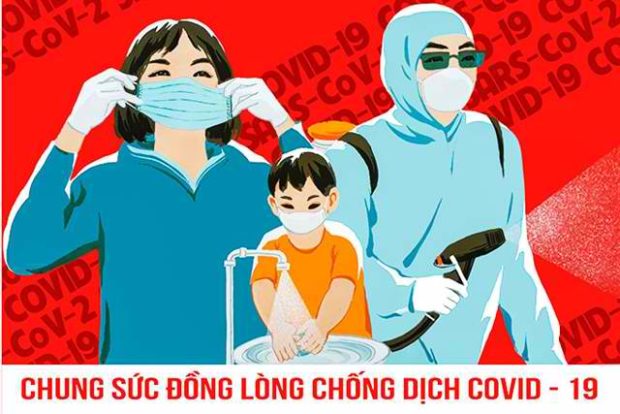 HANOI — Vietnam recently celebrated the 45th anniversary of the country’s National Reunification and victory over a global superpower, but it has also been praised internationally in the past few weeks for initially winning the battle against an invisible enemy – the novel coronavirus.

Even though the SARS-CoV-2 virus has led to more than 3.5 million infections and 240,000 deaths globally, there have been only 271 confirmed cases (or 2.8 cases per million people) so far in Việt Nam, and no deaths reported. According to official figures, the country has recorded no new cases of community transmissions of the coronavirus for 18 days.

This is no small feat since Việt Nam shares a long border with China, the epicenter of the COVID-19 pandemic, is a low-income country, and has a huge population of 95 million people.

The World Economic Forum, the Financial Times and many others have applauded Việt Nam for its low-cost COVID-19 control and prevention model, and the Australian Strategic Policy Institute said “decisive leadership, accurate information and community solidarity” had helped Việt Nam to manage the pandemic.

So what’s the secret? It was the Government’s call for action: Fighting the epidemic is like fighting the enemy.

This is a success story the country has used throughout historic wars to mobilize nationalism.

What led to Việt Nam’s 1975 victory was a combination of united national strength and resources, and the unity of the military and the people in fighting the enemy. And such lessons have once again been drawn on in the country’s battle against coronavirus. The Government has spared no effort to combat the pandemic and protect its people, and the people, in return, have given their unceasing support. Therein lies the inexhaustible source of its power.

Việt Nam doesn’t have the resources to conduct massive testing like South Korea, and it knew its healthcare system couldn’t afford the luxury of having tens of thousands of COVID-19 patients, so it acted early and swiftly using a combination of a committed political system and public support.

It began testing early after the first cases of the coronavirus were reported in the country. It has since conducted aggressive and extensive contact tracing, lockdowns and public communications campaigns.

All of these measures have been strictly followed and supported by the country’s military, public security forces, healthcare system and people.

The military was put in charge of transporting and providing accommodation for tens of thousands of people returning home to Việt Nam from outbreak zones who needed to spend time in quarantine.

In the first outbreak of the virus in northern Vĩnh Phúc Province, a special task force was set up and sent from the capital to control the situation. Teams went door-to-door every day to check on the health of local residents and suspected infections.

This practice continued when the second phase broke out in Việt Nam.

For each group of residents living in different parts of Việt Nam, there is a leader. He or she plays the role of communicating with residents’ groups about daily matters within their neighborhoods. Local media have been running stories about energetic and enthusiastic individuals who have been traveling door-to-door to provide information about the Government’s education campaign on COVID-19.

This model has proven its efficiency by also tracing suspected cases and making sure the virus doesn’t spread. A huge number of people have been mobilized to track down people who had contact with confirmed cases.

The Government has also been creative in launching a public education campaign that includes cartoons, social media posts and posters about COVID-19, triggering a nationalist spirit. The slogan “Every business, every citizen, every residential area must be a fortress to prevent from the epidemic” has been effectively used to raise the patriotic spirit among many Vietnamese people, who have always been proud of their ability to stand united throughout wars and hardships.

The people have been picking up on the Government’s message by spreading other down-to-earth slogans like “staying at home is a patriot act”, and “fighting the enemy means you have to go to the battlefront, but fighting the pandemic means you should stay home”. Social media campaigns have also been launched to call on people to change their avatars using the slogan “Stay home when your country needs you”.

Messages regarding the prevention and fight against the COVID-19 pandemic have been spread everywhere to raise public awareness of disease prevention and control, and face masks have become an indispensable item for everyone.

Medical students and retired doctors and nurses have also been mobilized and told to be ready if needed. A fund-raising campaign to buy medical and protective equipment for all those working on the frontline like health staff and soldiers was launched and attracted millions of people. ‘Rice ATMs’ have been set up in localities across the country in order to support needy people affected by the pandemic.

Many organizations and individuals have also implemented their own campaigns to raise funds and provide food and gifts to poor or homeless people, with many heartwarming stories. The people of Việt Nam have shown their solidarity in maintaining social order and promoting the image of a united, responsible and humane society.

The Government has also used text messaging and apps to provide information to citizens and encourage them to follow the health ministry’s guidelines on COVID-19 prevention.

The MoH’s online portal publicizes each new case every day to all major news outlets and the general public, with details including location, mode of infection and action taken. Digital communication has helped not only disseminate accurate information quickly but also stem the spread of rumors and fake news regarding the pandemic.

Such efforts to control the situation and provide transparent information have gained huge public confidence for the Vietnamese Government. In a Dalia Research survey of 45 countries asking about public opinion of government responses to the pandemic, 62 per cent of Vietnamese participants said the Government was doing the “right amount” of work needed.

In addition, Việt Nam has also been demonstrating humanitarian solidarity in the face of the pandemic threat to humanity by sending 450,000 hazmat suits, bought and paid for, to the United States from a local DuPont plant. It has had enough capacity to send 550,000 surgical masks to the worst-affected countries in Europe, and another 730,000 to its neighbors, Laos and Cambodia.

The war is ongoing, but the pandemic has strengthened Việt Nam’s reputation and public trust in the Government. Tackling the matter of the economic recovery will be the next challenge that will require no less effort.