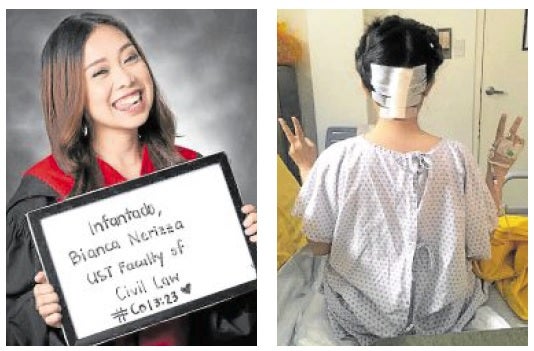 ONE TOUGH LADY Bianca Nerissa Infantado’s Bible verse to live by, Colossians 3:23, was featured in her graduation picture. At right, she strikes a pose after surgery to remove a brain tumor. —CONTRIBUTED PHOTOS

MANILA, Philippines— The loss of her father during her last semester in law school, a brain operation that made it difficult for her to review for the bar and a rare genetic disorder were among the hurdles that Bianca Nerriza Infantado, a 26-year-old graduate of the University of Santo Tomas (UST) law school, had to overcome to achieve her dream.

Last week, she learned that she was among the 2,103 hopefuls who had passed the 2019 bar examinations.

“I was on cloud nine. It was a mix of excitement and relief,” said Infantado who underwent an operation to remove a brain tumor in May 2018.

“A part of my skull had been removed during surgery… I always had a hard time moving my neck or my head. During the months after surgery, I could not read for 10 minutes without having headaches,” she said.

Despite her condition, Infantado graduated two months later and was preparing for the bar exams that year when she was diagnosed with Von Hippel-Lindau syndrome, a rare genetic disorder that causes tumors in the spine and brain and affects an estimated 200,000 people worldwide.

“My bar exam story was far from how I planned it. I am a control freak who plans ahead of time, complete with contingency plans. But life took a turn and I hit rock bottom during a phase when I thought I was too close to the prize,” she wrote on Facebook.

An award-winning debater and officer of the UST Law Debate & Moot Society and UST Law Review, Infantado was among the top 10 students in her batch.

“Anyone who underwent a brain surgery would know how I felt. Studying law requires at least 10 hours of dedication each day but postoperative fatigue and severe headaches made it hard for me to sit upright and study for 30 minutes,” she said.

Forced to put on hold her plans of taking the bar immediately after graduation, Infantado concentrated on getting better so that she could take the test in 2019 and fulfill her late father’s dream of becoming a lawyer.

“I was really close to him; he was actually my confidante. He was the one I ran to whenever I was worried about law school concerns… He would even refrain from taking merienda breaks just to save money for my allowance. He always had the right words to lift my spirit so losing him was probably the biggest blow I ever received,” she said.

She recalled that when he died during her last semester in law school, she was so traumatized that she could not concentrate on her studies.

“I wanted to stop the world for a moment and take a break from law school but it was never an option so I hustled on,” Infantado said.

The first months of her review, she said, were difficult. From their province in Calapan City, Oriental Mindoro, she would travel to Manila to attend free bar lectures as she was not enrolled in any review center. She also had to rely on friends for review materials since she was on hiatus for a year.

“And since I lost a part of my skull, I always had trouble with head positions while reading. But praise the Lord, trouble and pain were tolerable that time,” she said.

With the title of attorney now achieved, Infantado, who works for a private firm in Calapan City, said her goal is to be a Christian lawyer who upholds the law and not the caprice of her clients.

She still regularly undergoes tests for her Von Hippel-Lindau ailment which makes her susceptible to tumors. Last January, she underwent 10 laboratory tests to check her important and affected body organs, including her eyes, ears, kidneys and pancreas.

“So until another tumor shows up, I won’t be needing any surgery. Right now, I have tumors in my pancreas but specialists here have yet to figure out how to remove them without impairing the organ. They only recommended strict monitoring,” Infantado said.

Despite her condition, she looks forward to engaging in ligitation and gaining expertise from topnotch lawyers in her province.

Her advice for aspiring lawyers: Never give up and take to heart Colossians 3:23: “In everything you do, work at it with all your heart as if working for the Lord and not for men.”