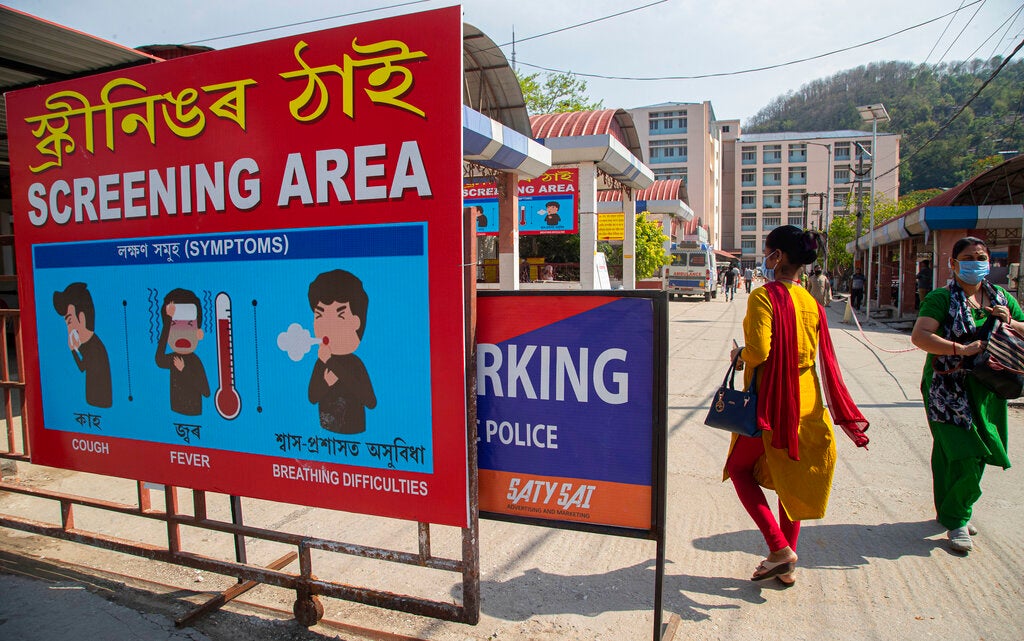 Indian women wearing masks walk past a COVID-19 screening area in Guwahati Medical College Hospital (GMCH) in Gauhati, India, Friday, May 1, 2020. India will extend its lockdown for another two weeks, with relaxations in some areas. The government will continue stricter measures in places classified ‘red zones,’ such as New Delhi and Mumbai, and ‘orange zones,’ which have some cases. In ‘green zones’ or low risk areas, some movement of people and economic activities will be allowed, India’s home ministry said Friday. (AP Photo/Anupam Nath)

India has embarked on a “massive” operation involving naval ships and aircraft to bring back some of the hundreds of thousands of nationals stuck abroad due to coronavirus restrictions, the government said.

India banned all incoming international flights in late March as it imposed one of the world’s strictest virus lockdowns, leaving vast numbers of workers and students stranded.

A defense spokesman told AFP on Tuesday that two ships were steaming towards the Maldives and another to the United Arab Emirates — home to a 3.3-million-strong Indian community, who make up around 30 percent of the Gulf state’s population.

A government statement said the evacuations would begin on Thursday and that Indian embassies and high commissions were preparing lists of “distressed Indian citizens”.

The consulate in Dubai said that it alone had almost 200,000 applications, appealing on Twitter for “patience and cooperation” as India undertakes the “massive task” of repatriation.

The oil-rich Gulf is reliant on the cheap labor of millions of foreigners — mostly from India, Pakistan, Nepal and Sri Lanka — many of whom live in squalid camps far from the region’s showy skyscrapers and malls.

But coronavirus and the devastating economic impact of the pandemic has left many workers sick and others unemployed, unpaid and at the mercy of sometimes unscrupulous employers.

The UAE has been the most vocal among Gulf countries in demanding governments take workers back, with almost 23,000 having left as of April 20.

But New Delhi had until now refused to cooperate, balking at the logistical and safety nightmare of repatriating and quarantining millions of returning citizens.

India had earlier evacuated some 2,500 Indians from China, Japan, Iran and Italy before banning international and domestic travel.