EU to reassure Balkan hopefuls they are not forgotten 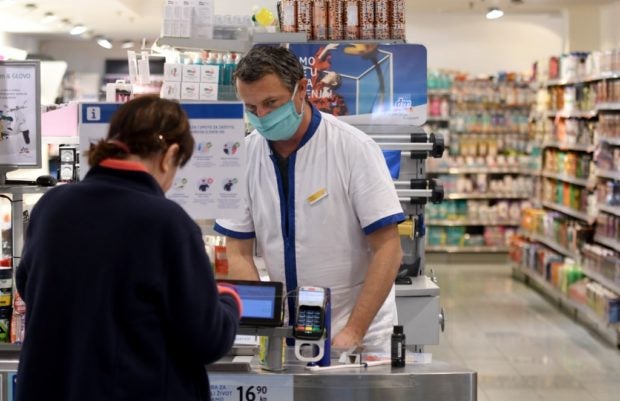 A customer buy items in a store on April 27, 2020, in Zagreb, as Croatia loosens up lockdown measures imposed to fight the coronavirus pandemic with public transport resuming and shops re-opening. Photo by DENIS LOVROVIC / AFP

ZAGREB — With the coronavirus crisis hardening Europe’s borders and draining the continent’s resources, Brussels is trying to reassure its Balkan neighbors it hasn’t forgotten about their needs and membership dreams.

An EU summit with six Western Balkans countries, all of whom aspire to join the bloc, was originally scheduled to kick off Wednesday in Zagreb.

But the talks will now be held virtually because of the coronavirus pandemic, which has claimed more than 250,000 lives in a matter of months and has battered Europe especially hard.

With fewer than 500 confirmed virus deaths, the Western Balkans has so far avoided the devastation seen in Europe’s worst-affected countries.

But the poor region’s weak economies are bracing for a painful economic fallout — and wondering how their future fits into an EU focused on its own survival.

Of the EU hopefuls, Montenegro and Serbia are furthest along in their membership talks, with the earliest possible date of entry slated for 2025.

Behind them are North Macedonia and Albania who, after months of delays, were given the green light in March to embark on the process.

And at the back of the pack are Kosovo and Bosnia, who are still hoping to be granted candidate status.

After facing criticism over initially slow steps to help the Balkans navigate the virus crisis, Brussels has been trying to affirm its support for the pocket of countries that sits outside its southeast border.

The campaign comes after China earned plaudits for its swift shipments of masks and other gear to the region, where it has been chalking up influence in recent years.

Since then EU officials have been highlighting the bloc’s already significant investments in the Balkans’ healthcare over the past two decades, plus fresh injections of coronavirus aid.

And ahead of Wednesday’s summit Brussels announced an additional 3.3 billion euros ($3.6 billion) to help the region combat COVID-19 and ease its social and economic recovery.

“We have a special responsibility to assist in this pandemic our partners in the Western Balkans, as their future clearly lies in (the) European Union,” European Commission chief Ursula von der Leyen said in a statement.

The package was “confirming the strong solidarity”, she added.

A diplomatic source in Brussels told AFP the summit would “demonstrate the EU’s renewed commitment to the European perspective for the Western Balkans region”.

Ever since Croatia, which currently holds the EU presidency, became the last country to join the bloc in 2013, the tide has turned against the enlargement process as the appetite for adding new member states shrinks.

Last October, France and the Netherlands sparked outrage by insisting on redrawing the accession process before agreeing to begin talks with Skopje and Tirana.

That move dented EU credibility in the region, where many viewed the bloc as failing to keep promises to Skopje and Tirana, despite significant reforms on their part.

In March they were given the green light but a concrete start date has not yet been set for negotiations likely to drag on for years.

Some fear the coronavirus pandemic has pushed the issue even further down the agenda.

“The enlargement issue is now very low on the list of EU priorities,” said Croatian political analyst Senada Selo Sabic, noting it had not been high to begin with.