What's shopping in a pandemic like? Drive to your local mall | Inquirer News
Close
menu
search

What’s shopping in a pandemic like? Drive to your local mall

NEW YORK  — Many Americans are getting their first taste of what pandemic shopping looks like at their local mall. 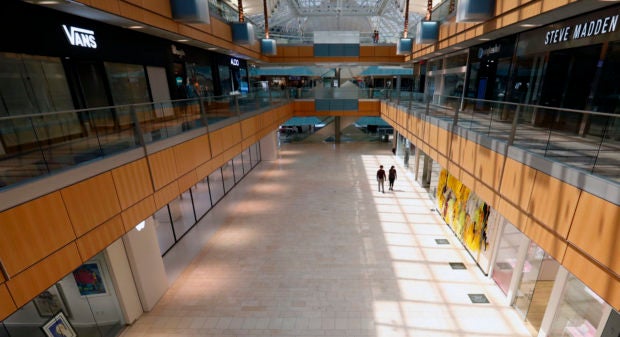 Amid concerns of the spread of COVID-19, few shoppers are seen at the Galleria Dallas mall in Dallas, Monday, May 4, 2020. (AP Photo/LM Otero)

There, a new reality is on display: Play areas and water fountains are off limits. Employees wear masks and shopping in groups is banned. Shoppers can also get their temperature checked for free on the premises.

Among other changes: Every other urinal and sink is taped off, and there’s ample space between seating in the food court. Simon also has technologies that will make sure occupancy will not exceed one person for every 50 feet (15 meters).

But despite all the safety measures, the question remains: Will anyone come? 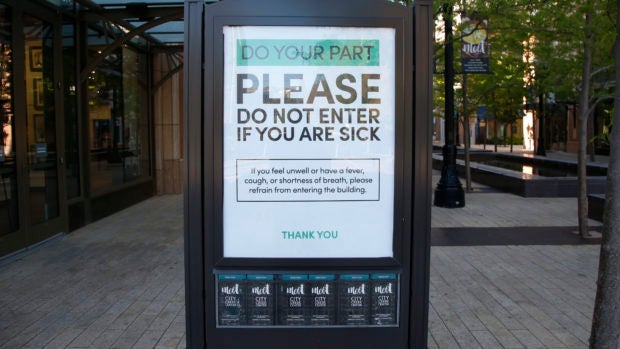 A “please do not enter if you are sick” sign is shown at City Creek Center Monday, May 4, 2020, in Salt Lake City. Several major Utah malls have announced their reopening’s after Utah leaders moved the state’s COVID-19 risk level from high to moderate. City Creek Center will reopen Wednesday, May 6, 2020. (AP Photo/Rick Bowmer)

“There are still a lot of people who are scared,” said Jon Reily, global head of commerce strategy at Isobar Global, a global digital agency. “The tricky part for malls is finding that sweet spot. Yes, you can come here and yes, you can be safe.”

So far, the early signs haven’t been encouraging.

At Simon’s Town Center at Cobb, which reopened Monday in Kennesaw, a suburb of Atlanta, many of the stores remained closed. Those still dark and locked by gates included Starbucks, Victoria’s Secret, Helzberg Diamonds and the Build-A-Bear Workshop. Some of the kiosks selling jewelry, cell phones and T-shirts were open, though others were closed.

For sale at one of the kiosks: A black-and-white T-shirt emblazoned with a gas mask and the words “I Survived Coronavirus 2020.”

Douglas Butler, 28, arrived at Simon’s Lenox Square mall in Atlanta around 11 a.m. on Monday. It was much less crowded than normal, and he easily found a parking spot in the normally packed lot.

Mall employees were handing out masks at the door, and just about everyone was wearing one while also maintaining distance from other shoppers, he said. Many stores still weren’t open, especially the higher-end and designer stores. He bought two new pairs of shoes for his 4-year-old son. He added he might pick up something for himself as well.

“Since I’m here, I might as well,” Butler said. “Everybody has a sale on. If you’re open, you have a sale.”

Meanwhile, a Nebraska mall got off to a subdued start Friday morning with just a few shops welcoming customers and about half a dozen patrons wandering the open-air facility wearing masks.

“I do think it’s a little soon, but it’s kind of slow and there aren’t a lot of people here, so I’m not too worried,” said Jasmine Ramos of Omaha.

Lawrence Gostin, a public health expert at Georgetown University who has been consulting businesses and governors on reopenings, agrees that it is too soon. There first needs to be a “long-term verifiable significant reduction” in cases and ample virus testing and contact tracing, he said.

And shoppers should be required to wear masks, he said.

“Malls are inherently risky places for transmission of the coronavirus by design,” he said. “They are there to have a lot of people congregating among each other and among the staff.”

Given so much uncertainty, many major national mall operators have held off on announcing reopening plans and are weighing safety protocols while waiting for stay-at-home restrictions to be lifted.

Taubman Centers, which operates 26 malls worldwide and is being acquired by Indianapolis-based Simon, said it plans to open three malls — two in Florida and one in Utah— on Wednesday. Chattanooga, Tennessee-based CBL Properties, which owns and manages 108 properties, said it will be announcing its reopening plans on a property-by-property basis.

Even before the cornonavirus pandemic, malls were grappling with a shift to online retail as well as shoppers who’d grown bored of department stores and specialty chains like The Gap. That resulted in a number of bankruptcies and liquidations of stores.

The coronavirus has brought further peril by derailing consumer spending and scaring off public gatherings.

Jan Rogers Kniffen, a consultant to investors in retail companies and a former retail executive, now expects that 500 of the 1,000 malls in the U.S. will either close or be unrecognizable in two years. Before the pandemic, he expected 300 to shutter by 2030.

The imminent demise of several key tenants could also leave shoppers with fewer places to spend. J.Crew, saddled by debt, filed for Chapter 11 on Monday, becoming the first major retailer to do so. J.C. Penney and Neiman Marcus are also expected to file for Chapter 11.

And Macy’s CEO Jeff Gennette told analysts Thursday that it would emerge from this crisis as a “smaller company.” That’s bad news because department stores represent 60% of mall anchor space, according to research firm Green Street Advisors.

Macy’s reopened nearly 70 stores Monday, with many just focusing only on curbside pickup. Gennette said he expects less than 20% of the business to come back at first. And shoppers will notice a lot of changes: The chain is banning spa-like services, as well as bra fitting and ear piercing. For clothes that have been tried or returned, workers will take them off the sales floor for 24 hours.

Higher-end malls are expected to survive the crisis because owners like Simon, which operates 200 properties in 37 states, have enough money to cover losses. A Simon spokesperson declined to comment.

There was already a growing gap between the high- and low-end malls. While vacancies at top malls have remained tight at 2.7 %, the bottom-rung of malls are struggling with an average vacancy rate of 7.9% as of the first three months of 2020, according to Kevin Cody, senior consultant at CoStar Portfolio.

William Taubman, chief operating officer at Taubman Centers, which operates such high-end centers as The Mall at Short Hills in N.J. and Beverly Centers in Los Angeles, said he believes the carnage in stores in communities will only fortify business at malls like his. He feels heartened that Taubman’s mall business in South Korea is exceeding sales prior to the pandemic. In China, business is “not quite there but almost there.”

Taubman said he thinks many are interested in getting out but “they may come less frequently.” He expects spending will be higher for each trip.