Even in pandemic, Jews flown to Jerusalem for burial 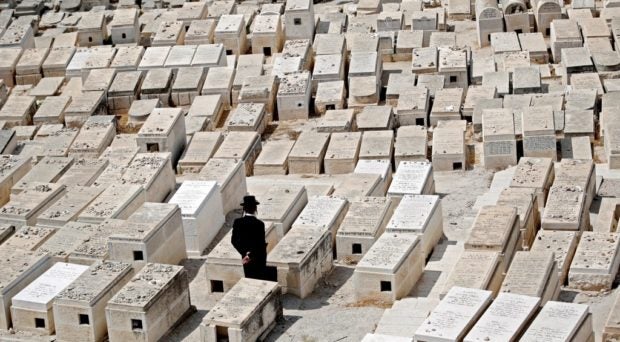 In this file photo taken on September 9, 2018, an Ultra Orthodox man mourns on tombs at the Jewish cemetery on the Mount of Olives in front of the Jerusalem’s Old City. Some families have transferred the bodies of their loved ones from abroad to be buried in Israel despite the difficulties during the novel coronavirus pandemic. Many Jews want to be buried in the world’s only predominantly Jewish state, where they think their graves are less likely to be desecrated by anti-Semitic abuse. Photo by THOMAS COEX / AFP

JERUSALEM — Serge Bokobza’s family did not want him to be buried anywhere but Jerusalem so when he died of coronavirus they transferred the body from France, despite the difficulties during a pandemic.

The 70-year-old doctor from a Paris suburb was laid to rest a few weeks ago on the Mount of Olives, overlooking the Old City of Jerusalem, home to the holiest sites in the Jewish faith.

It was a funeral that bore all the hallmarks of the coronavirus age, with gravediggers dressed in sterile coveralls and protective masks.

Only one member of his family, the rabbi Shraga Dahan who lives in Israel, was allowed to attend.

“I installed the (videoconferencing application) Zoom so that everyone could follow the burial directly,” Dahan told AFP.

“Hundreds of people were present virtually but at the actual site we were around 10, including the funeral employees. It was very strange.”

Since the beginning of the new coronavirus outbreak, Israel’s skies have been mostly empty with borders almost sealed and few commercial flights.

But a number of planes can still be seen on the tarmac at Israel’s Ben Gurion Airport, some carrying the bodies of Jews who requested to be buried in Israel or Jerusalem.

Some families paid large sums to overcome the complications of transporting remains during a pandemic.

Due to the few flights to Tel Aviv, some “families had to rent private planes to bring the bodies of their loved ones and paid huge sums,” said Yehuda Meshi-Zahav, founder of the Zaka organization which helps facilitate funerals in Israel for Jews from abroad.

Recently a Jewish family in New York paid $250,000 to transport a body, he said.

Around 250 foreigners, whether they died of the virus or not, have been brought to Israel since the beginning of the pandemic, Meshi-Zahav said.

Normally there are around 1,500 per year, he added.

All Jews coming from abroad for burial in Israel must reserve a space in a cemetery which in prime Jerusalem locations can cost around 100,000 shekels ($29,000, 26,000 euros).

Many Jews want to be buried in the world’s only predominantly Jewish state where they think their graves are less likely to be desecrated by anti-Semitic abuse.

Tradition also dictates that Jews have the right to an eternal burial.

If buried in a municipal cemetery in their country of origin, they run the risk of having their remains moved decades later due to lack of space.

Burial in Israel also guarantees them their funeral rites will be fully respected, especially during a virus outbreak.

In France, to avoid the potential risks of contamination, washing the bodies of the dead has been temporarily banned.

This would be inconceivable for religious Jews whose bodies must be washed before being wrapped in a shroud and buried.

Meshi-Zahav said funeral directors and staff had been given special training in sanitary rules.

Yves Sportes, a funeral director in France, explained that he places the bodies in two sanitary covers to avoid any contamination.

The funeral directors on the Israeli side then “take care of everything according to local health rules”.

Sportes said he had facilitated the transfer of around 50 bodies since the beginning of the coronavirus pandemic, compared with 150 annually normally.

Since the start of the crisis, the Israeli airline El Al has not operated from closed French airports.

The bodies must first be transported to Belgium, before being placed in cargo planes since the airline’s commercial flights are grounded, Sportes explained.

There are now only a couple of El Al flights from Belgium to Israel per week.

Last week, the company announced that it would resume more regular flights and therefore place bodies in the hold, allowing more people to be buried in Israel.

The company, which charges 3,000 euros for such transport, said it was essential that “any family who wants to bury a loved one in Israel (can) do so in an honorable manner and at a fair price.”

Read Next
Trump says US to have coronavirus vaccine by end of year
EDITORS' PICK
Water remains our saving grace right now
For nation’s birthday, Trump slams the enemies within
Military on heightened alert in Maguindanao after BIFF attacks
Give anti-terror law a chance, ditch misinformation – Defense Sec. Lorenzana
EuroMillions Superdraw: A lottery draw unlike any other is coming to the Philippines
Smart releases Hyun Bin’s second TVC
MOST READ
NAIA Terminal 3 to open for international flights starting July 8
Hyun Bin: ‘I will meet with my Filipino fans first’
BI officers sacked for ‘fictitiously’ encoding Wirecard COO’s entry to PH
Anti-Terrorism Council’s first move: Make a list
Don't miss out on the latest news and information.