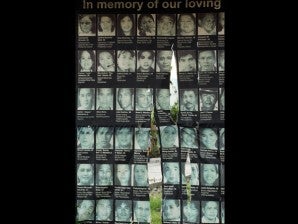 The family of a photojournalist believed to be the 58th victim in the 2009 Maguidanao massacre has called on the Department of Justice (DOJ) to file an additional murder charge against all the accused in the case.

Through her lawyer Gilbert Andres, Reynafe Castillo filed a complaint against former Maguindanao Gov. Andal Ampatuan Sr., his son Datu Unsay ex-mayor Andal Ampatuan Jr. and more than 100 people now in custody or still at large for the killing of her father, photojournalist Reynaldo Momay.

Castillo, who worked for the Tacurong City-based Midland Review, said she believed her father was one of those killed although his body was never found.

Only a portion of Momay’s dentures were found at the massacre site in Ampatuan town, Maguindanao.

Castillo said a forensic expert hired by the Commission on Human Rights had concluded that the dentures did not belong to any of the 57 bodies recovered from the massacre site. She said the herbalist who made the dentures identified them as her father’s.

She said there were witnesses who would testify that Momay was among the journalists who joined the convoy that accompanied then Buluan Mayor Esmael Mangudadatu’s wife, Genalyn, to Shariff Aguak to file his certificate of candidacy for governor in the 2010 elections.  Everyone in the convoy, including 32 media workers, were killed allegedly by members of the Ampatuan clan and their henchmen.

Momay, however, was never included in the official list of massacre victims because his body was never found. The Quezon City court trying the case is hearing only 57 counts of murder against the accused.

Hidilyn Diaz cheers Nesthy Petecio on: ‘Go for gold, you can do it’