WASHINGTON, United States – US Secretary of State Mike Pompeo on Sunday said “enormous evidence” showed the new coronavirus originated in a lab in China, further fueling tensions with Beijing over its handling of the outbreak. 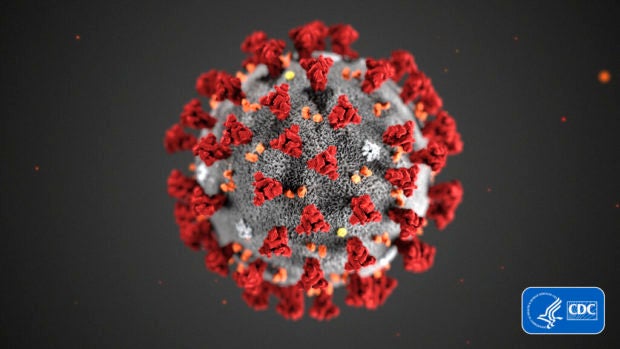 FILE – This illustration provided by the Centers for Disease Control and Prevention (CDC) in January 2020 shows the 2019 Novel Coronavirus (2019-nCoV). The coronavirus outbreak has exposed a seeming disconnect between the financial markets and science. Health experts are uncertain how far the virus out of China will spread and how bad the crisis will get, yet stock markets are rallying as if they’re not expecting more than a modest hit to the global economy. (CDC via AP, File)

Pompeo’s comments came as Europe and parts of the United States prepared to cautiously lift virus lockdowns as signs emerge that the deadly pandemic is ebbing and governments look to restart their battered economies.

More than 245,000 people have been killed and 3.4 million infected worldwide by the virus, which has left half of humanity under some form of lockdown and pushed the global economy towards its worst downturn since the Great Depression.

US President Donald Trump, increasingly critical of China’s management of the first outbreak in the city of Wuhan in December, last week claimed to have proof it started in a Chinese laboratory.

Scientists believe the virus jumped from animals to humans, after emerging in China, possibly from a market in Wuhan selling exotic animals for meat.

‘History of infecting the world’

China denies the claims, and the US Director of National Intelligence office has said analysts are still examining the exact origin of the outbreak.

Pompeo, a former CIA chief, told the ABC he agreed with a statement from the US intelligence community about the “wide scientific consensus that the COVID-19 virus was not man-made or genetically modified.”

But Pompeo went further than Trump, citing “significant” and “enormous” evidence that the virus originated in a Wuhan lab.

“I think the whole world can see now, remember, China has a history of infecting the world and running substandard laboratories.”

Pressure from demonstrators
US news reports say Trump has tasked US spies to find out more about the origins of the virus, as he makes China’s handling of the pandemic a centerpiece of his campaign for the November presidential election.

The United States has the most coronavirus deaths in the world at more 67,000, and Trump is keen for a turnaround to help reduce the economic pain, with tens of millions left jobless.

Florida is set to ease its lockdown Monday, as other states wrestle with pressure from demonstrators — some carrying weapons — who have rallied against the restrictions.

In New York, the epicenter of the US outbreak, an emergency field hospital erected in Central Park is set to close as virus cases decline.

But dozens of New Yorkers were fined for violating social distancing guidelines as they flocked to beaches and parks in balmy weekend weather.

‘Rules are not clear’
Across the Atlantic, European nations prepared for cautious easing of restrictions.

Hard-hit Italy — which reported its lowest daily toll since stay-at-home orders were imposed on March 10 — is set to follow Spain in allowing people outside.

Italians from Monday will be allowed to stroll in parks and visit relatives. Restaurants can open for takeaways and wholesale stores can resume business, but there was some confusion over the rules.

Romans were doing aerobics on rooftop terraces and exercising indoors while squares in the city centre were mostly empty on the last day that Italians were obliged to remain within 200 meters of their homes.

“On the one hand, we’re super excited for the reopening, we’re already organizing various activities the kids will be able to do with their grandparents outdoors,” said Rome resident Marghe Lodoli, who has three children.

“On the other hand, it’s disorientating. The rules are not clear, and we’re not sure if just using common sense will do.”

Italian authorities have said some preventative measures are still needed in a country that has the second-highest number of virus deaths.

Elsewhere, Germany will continue its easing Monday, while Slovenia, Poland and Hungary will allow public spaces and businesses to partially reopen.

In another sign of life returning, an influential German minister said Sunday he supports a resumption of the country’s football season this month as long as teams respect hygiene conditions.

The British government said the easing of coronavirus lockdown measures was likely to be gradual, as it announced a further rise in the overall death toll.

Prime Minister Boris Johnson was expected to unveil the government’s plans in coming days, after announcing the country had passed the peak of the virus.

Most governments are sticking to measures to control the spread of the virus — social distancing and masks in public — and more testing to try to track infections even as they relax curbs.

Face masks will be mandatory on public transport starting Monday in Spain, where people were allowed to go outdoors to exercise and walk freely Saturday after a 48-day lockdown.

Even as some European countries gradually lift restrictions, officials in Moscow — the epicenter of the contagion in Russia — urged residents to stay home.

With cases increasing by several thousand each day, Russia is now the European country registering the most new infections.

Prepare for ‘bad scenarios’
European leaders are backing an initiative from Brussels to raise 7.5 billion euros ($8.3 billion) to tackle the pandemic and raise funds for efforts to find a vaccine for COVID-19, the disease caused by coronavirus.

The race is on to find a viable vaccine or treatment with several countries involved in trials.

The head of the maker of remdesivir, an anti-viral shown to reduce recovery times in patients, said Sunday it was exporting the drug and making it available in the US through the government.

In Asia, South Korea — once the second worst-hit nation on the planet — said Sunday it would ease a ban on some gatherings and events as long as they “follow disinfection measures.”

Thailand allowed businesses such as restaurants, hair salons and outdoor markets to reopen so long as social distancing was maintained and temperature checks carried out.

But experts caution that many countries are still not through the worst.

The Philippines suspended all flights into and out of the country for a week starting Sunday in a bid to ease pressure on its congested quarantine facilities.

Iranian President Hassan Rouhani announced that mosques would reopen across large parts of the Islamic Republic, after they were closed in early March to try to contain the Middle East’s deadliest COVID-19 outbreak.