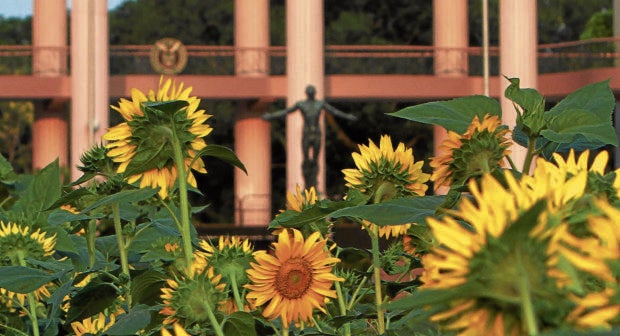 GIFT TO GRADUATES Sunflowers have become synonymous with the hard-earned feeling of triumph at the end of one’s UP journey. (Photo by EDWIN BACASMAS / Philippine Daily Inquirer)

MANILA, Philippines — While the new coronavirus disease (COVID-19) may lead to the postponement or even cancellation of this year’s commencement rites at the state university, it doesn’t mean the end of a cherished graduation tradition.

The University of the Philippines (UP) Diliman will start planting 22,000 sunflower seeds on University Avenue today—a hopeful sign that despite these uncertain times, the bright icon that has long been a parting gift to graduating students is here to stay.

James Buño, director of the Campus Maintenance Office (CMO), said in an interview that the enhanced community quarantine in place to contain COVID-19 infused a high degree of uncertainty into their preparations, which usually begin as early as January.

But after consulting vice chancellor for community affairs Jose Lope, Buño said they both decided to press forward. His office had already laid the groundwork, which included cultivating the soil and procuring thousands of sunflower seeds.

Most significant, however, was the symbolic weight of the sunflowers, which had become synonymous with the hard-earned feeling of triumph at the end of one’s UP journey.

“Even without the graduation ceremonies, it will still provide value knowing that the planting of the sunflowers is pushing through,” Buño said. “Our graduates will still see sunflowers in June.”

According to him, “in these times, there are a lot of uncertainties.” With all the talk of a “new normal,” there is an intrinsic value in the traditions that don’t need to be lost, he said.

“Ever since the planting of sunflowers started, it has been a symbol of hope. For those waiting on this yearly tradition, it still symbolizes hope,” he added. As with every other aspect of life, though, COVID-19 has forced some reimagining.

The most major change to the sunflowers this year is the number being planted—only a quarter of the roughly 88,000 sunflower seeds sowed in a typical year.

The flowers will also be confined to the stretch of University Avenue closest to the Oblation and Quezon Hall, where university-wide graduation rites are normally held, unlike previous years when the sunflowers occupied the full length of the road.

These compromises were necessary, Buño said, to keep the tradition alive. While the image of the flowers in full bloom and at their most glorious is familiar to the whole UP community, very few are aware of the labor-intensive, monthslong spadework that comes before that.

“The planting alone takes 20 people so it can be done in two days. The seeds need to be planted all at once,” Buño said. “Then the flowers need to be watered every day by at least 12 people, who are deployed to tend to the whole stretch of University Avenue.”

The global pandemic has forced CMO to operate with a skeleton workforce, he added, making these protocols impossible. This year, they had determined that watering every other day instead would be enough to irrigate the smaller patch of sunflowers.

The flowers are expected to be at their tallest and brightest in the last week of June. They usually last until around mid-July.

This is, of course, not the first time the fate of the sunflower tradition has been thrown into question.

As the name suggests, the flowers need sunlight to grow, which made the height of summer—when previous commencement ceremonies were held —t he perfect time.

But when UP shifted its academic calendar in 2014, graduation rites were suddenly thrust smack into the start of the country’s punishing rainy season. After studying different contingencies, Buño said CMO decided to procure a “hybrid” sunflower seed that, while more expensive than previous years, was more resilient. The sturdier flowers were built to weather rain. Now, they would also stand up as an emblem of hope amid COVID-19.