Man tells officials his wife has already gotten cash assistance under program in N. Ecija
By: Jodee A. Agoncillo - Reporter / @jagoncilloINQ
Philippine Daily Inquirer / 04:03 AM May 04, 2020 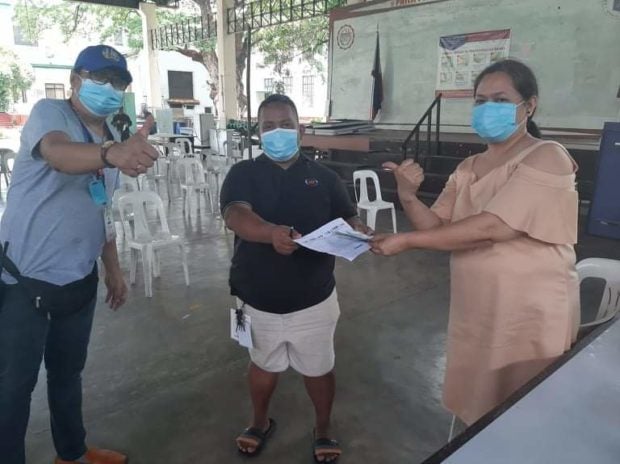 ‘GEM OF A PASAYEÑO’ Danilo Rojas (center) returns to Pasay officials the social amelioration card form that would have entitled him to P8,000 in cash assistance under SAP. —PHOTO FROM PASAY PUBLIC INFORMATION OFFICE

MANILA, Philippines — Pasay Mayor Emi Calixto-Rubiano on Sunday called a tricycle driver and longtime fire volunteer “a gem” of the city after he gave up the P8,000 he was set to receive under the national government’s social amelioration program (SAP) because his wife had been given the same cash assistance in Nueva Ecjia province.

“This noble deed of Mr. Danilo “Danny” Rojas is indeed an inspiration, an uplifting account about a simple man with a pure heart who, despite being affected by the crisis himself, still thought of the situation of other people who are [more] affected than he is. Mr. Danny Rojas is indeed a gem of a Pasayeño,” Rubiano said.

Rojas, along with other tricycle drivers, went to City Hall on April 30 to claim a P2,000 cash assistance from the city government. But when he saw that he was being asked to fill out a social amelioration card which would also entitle him to the P8,000 financial aid under SAP, he told Pasay Social Welfare and Development Department (PSWDD) officials that he was no longer entitled to the money since his wife had received four days earlier P6,500 in cash assistance under the same program. The financial aid is given per family.

He even showed the PSWDD officials photos of the SAP distribution in General Tinio, Nueva Ecija.

So while his fellow tricycle drivers went home with P10,000 worth of cash assistance that day, Rojas was happy even though he only had the P2,000 he got from the city government.

“There are so many people in need that’s why I returned the money. I have been helping people as a volunteer so I want to help others as well,” he told the Inquirer.

A member of the city’s Tricycle Operators and Drivers Association, the 44-year-old Rojas immediately joined the Pasay Volunteer Fire Brigade right after he finished high school over 20 years ago.

He admitted that although his family could have used the money, he did not want to get what did not belong to him.

“I did not doubt or hesitate. You should only get what the Lord gives you. If you get more than what you need, what will happen to those who are also in need?” he said, adding, “Do not get what is not meant for you.”

According to Rojas, his wife, Anna, was happy about what he did. “In the province, many have also been asking my wife for help. This is my simple way of helping them,” he said.

Read Next
Tiangco places Navotas City on extreme ‘lockdown’ from May 6 to 15
EDITORS' PICK
294 areas in NCR under granular lockdown — PNP
4 essentials for overcoming data protection challenges in the New Normal
Pharmally’s Mago no longer in her condo unit — Gordon
Huawei’s relentless mission to bring ultimate health and wellness tracking for your fitness goals
Gordon to Pharmally’s Mago: Show up or be a fugitive
Smart reaffirms 5G leadership as PH’s most reliable 5G mobile operator
MOST READ
Pharmally’s Mago no longer in her condo unit — Gordon
Senators secure Pharmally exec offering to turn witness
Guimbal, Iloilo Mayor Oscar Garin passes away
Bong Go says he is not seeking presidency in 2022
Don't miss out on the latest news and information.