All is quiet in Bohol’s May fiesta lanes 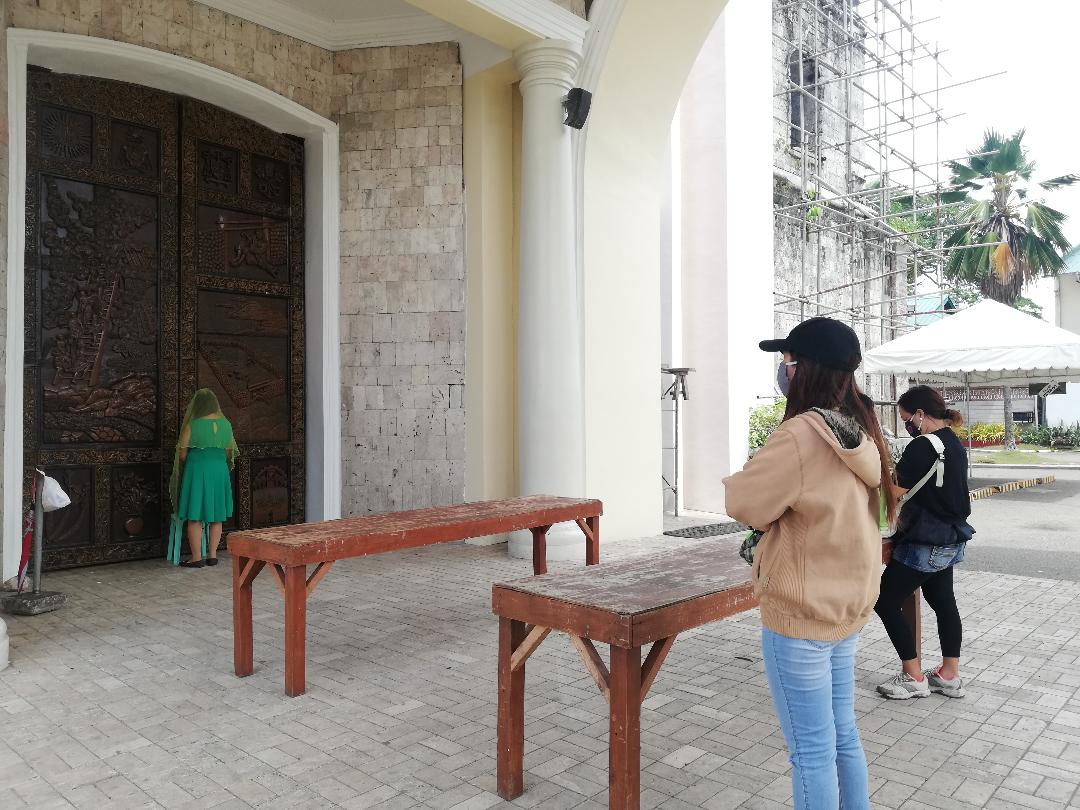 CLOSED Catholic devotees, observing physical distancing, pray before the closed doors of the St. Joseph the Worker Cathedral in Tagbilaran City to celebrate the saint’s feast day on May 1. —LEO UDTOHAN

TAGBILARAN CITY—The mood in this city on Friday was supposed to be festive.

But Tagbilaran City was silent all day long on May 1, the feast of St. Joseph the Worker. The day used to be a widely anticipated fiesta celebration in the city, which usually kicked off the monthlong merrymaking in Bohol province, where a fiesta is held every day in its different towns, down to the last barangay.

In his executive order, the mayor also ordered the closure of all four malls in the city to prevent people from converging.

With the lockdown in place for the day, only a few vehicles were seen along the city’s thoroughfares. Churches remained closed and Masses were still held in private. Some parishioners, however, prayed outside the closed doors of the St. Joseph the Worker Cathedral.

Bohol was listed as one of the “low-risk areas” for the new coronavirus disease (COVID-19) outbreak, allowing the province to transition to GCQ starting May 1.

For residents like Gelacio Castaño, the lockdown extension meant putting a hold to a long-held family tradition of opening his home in Barangay Cogon to daylong feasting, where every relative, friend or even a stranger could enter his house to partake on heaps of food laid out for everyone to enjoy.

This daily feasting during May is a phenomenon to outsiders but a natural May fare for Boholanos who returned home in droves, wherever they might be in the country or in other parts of the world, to celebrate a myriad of fiestas in honor of patron saints up to the “sitio” (subvillage) level. It is an occasion for homecoming, and of family getting together for that once a year reunion.

But not this year. Not in this time of grave danger, when COVID-19 can sicken, or worse, kill anyone.

May is a special month for Boholanos because a fiesta occurs somewhere—in a sitio, barangay, town or city in Bohol on a daily basis.

What makes the Bohol fiestas unique is that anyone can travel around the province for the entire month to partake on free food because everyone is putting up a feast on any given day.

Fiestas in Bohol are characterized by an abundance of food, overflowing beer and “tuba” (coconut wine) and mass gatherings.

Boholanos are known to splurge during fiestas. Many homes prepare two roast two pigs for the feast—one to be consumed during the celebration and the other to be sliced up for the guests to bring home.

“The fiestas now will be different due to COVID-19,” rued Castaño.

Boholano psychologist Jerome Magallen said fiestas were very much embedded in the psyche of Boholanos. There is even an off-repeated local anecdote that said that the island of Bohol would sink by an inch each May because of the thousands of Boholanos who would come home to celebrate the many town and barrio fiestas, he said.

Despite the restrictions resulting from the quarantine measures, Magallen believed Boholanos would still find new ways to celebrate the fiesta without violating the prohibition on the mass gathering.

Wincesa Espejo-Araoarao, 80, like Castaño, also planned a family-only gathering for the May 1 fiesta in Tagbilaran.

But she sorely missed the hectic days that preceded the fiesta celebration. She recalled that the weekend before May 1 usually kept her entire family busy with cleaning their house. They even hired part-time housemaids to help in the cleaning, cooking and dishwashing as well as to serve the food to their guests on fiesta day, she added.

Since churches are closed, Araoarao planned to just watch the online Mass celebrating the feast of St. Joseph the Worker.

But if there was one thing that Araoarao continued to do, it was to bake her famous “torta,” a star-shaped moist and fluffy cake that has a generous sprinkle of sugar on top.

A fiesta celebration in her family is not complete without her torta. And of course, the usual “inasal baboy” (roasted pig).

Even families that wanted to be practical, as times were hard after COVID-19 pushed several companies to either cut workforces or close down, still wanted to celebrate their fiesta with an inasal.

But instead of ordering a whole roast pig, some residents ordered pork belly “lechon” (roasted pork belly) as “pahinungod” (offering) to their patron saint.

Tina Bagaipo-Dumas, proprietor of Tijan’s Lechon, said her orders for pork belly lechon was full days ahead of May 1. Pork belly lechon is sold from P1,000 to P2,500, which is cheaper than an entire lechon that costs at least P5,000.

“One (order of pork belly) is already enough for the family,” she said.