MANILA, Philippines — Date: April 29, 2020. It could have been a typical day for most Manila City dwellers who are into their 44th day of being indoors due to the enhanced community quarantine.

For Kenneth Manuel, it was the day he intentionally woke up late so that by the time he’d wake up the dreaded results were out. No, not the kind of result from a test for a virus. But it was frightening just the same. At least for him. 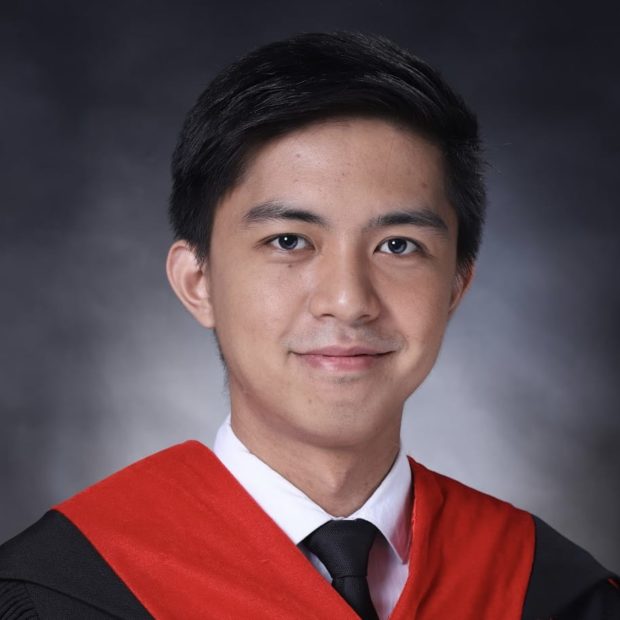 Opening one of his e-mails, he saw the only unopened message in an inbox: the result he’s been anxiously waiting for. But the subject head was a giveaway and it was not a horrible sight at all.

Manuel said becoming a lawyer was not one of his intentions when he was younger. In fact, he wanted to become a weather forecaster, a teacher, or a web designer.

But in his fourth year as an accountancy student, he was able to score a scholarship in the University of Santo Tomas (UST). It was only at this point when becoming a lawyer crossed his mind.

(I would say I’m just a typical law student. Aside from the fact that I was working because working students in UST are rather rare.)

Manuel recalled a “shameful recitation” where his “horrible” grammar was called out by his professor, who even told him to study basic English again.

He said he also flunked some of his exams, particularly in Criminal Law, and came to a point where he wanted to quit, especially after losing his scholarship and had to pay for full-year tuition prior to getting a new grant.

“Common naman to (This is common) among law students. We all thought about quitting at some point in time na, ‘Ang hirap na nito, kaya ko pa ba (All seemed already difficult, can I still make it)?’,” Manuel said.

“Palaging ang (The constant) question is, how do I manage my time? Ang lagi kong sagot (My constant answer) is, ‘In the first place, is it even managed?’. I have my calendar, nandun lahat ng gusto kong gawin pero parang hindi ko siya nasusunod (where everything I wanted to do was written but I seemingly failed to follow),” Manuel said.

This, he noted, would often result in him having “backlogs” or delayed readings.

But Manuel said he always makes sure that he would use his time productively such that most of his hours are spent either for work or for his studies.

“Kinakabahan kasi ako, kinakabahan ako na tingnan ‘yung (I was nervous, nervous to see the) results and therefore I decided to sleep through it… Sabi ko parang mamamatay ata ako sa kaba (I told myself I feel like I was going to die for being too nervous),” he said.

Manuel woke up just minutes before the clock struck noon.

“Sobrang nagulat ako kasi (I was so surprised because) I was not really expecting na pupunta ako sa (that I will land in the) Top 10 or sa (to any) placers ng (of the) Bar examinations,” Manuel said.

Manuel, who was separated from his family that’s based in Tarlac because of the Luzon-wide lockdown, could only celebrate alone. His celebration buddy? A pizza.

“Finally, April 29 was the day of relief kumbaga (so to speak), na nakuha (which I got) after so many days of anxiety,” he said.

Career in ‘most hated’ subject

Now that he has passed the Bar examinations, Manuel is eyeing to pursue a career in taxation, especially with his background in accountancy.

“Tax is one of the most frowned upon subjects in law school. Most hated by law students and at the same time most hated by ordinary citizens kasi alam mo ‘yun, wala namang gusto magbayad ng tax kasi (because you know, nobody wants to pay tax because) it’s their hard-earned money na nakakaltasan ng (that will be slashed with) tax,” Manuel said.

“Tax is something that really affects everyone. We take it for granted but ang dami-daming (there are many) aspects ng (of) taxation na nakapaligid satin (that is all around us),” he added.

Manuel said he also dreams of becoming a Court of Tax Appeals Justice and entering the legal academe someday.

The road to becoming a lawyer was tough, he admitted, but he also said those who really want to pursue it could get through.

“Although it is difficult, we must recognize that nothing is really too tough that we cannot surpass. Hindi porke’t mahirap (Only because one is poor), it’s already a sign for us to stop,” Manuel said.

“Obstacles are placed there to be hurdled. Hindi nilagay ang obstacles as a signal na(Obstacles in place are not signals to say), ‘I need to give up na pala’ (I need to already give up). These obstacles are there for you to pass through and that is essentially what kept me through law school,” he added.

And when things go really hard, Manuel advised aspiring lawyers to just go back to the one thing that made them take up law school: purpose.