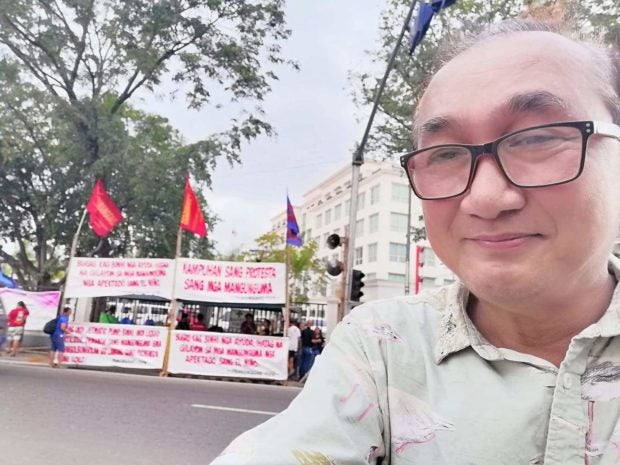 ILOILO CITY—Jose Reynaldo “Jory” Porquia was among the most prominent faces of the anti-Marcos movement on Panay Island in the early 1980s. He was among the young activists who would be arrested by authorities during protest actions.

While Porquia lived through the remainder of the regime of strongman Ferdinand Marcos and the succeeding administrations, he did not escape killers on Thursday, even while the country is at relative peace due to the government-imposed lockdown aimed at containing the spread of the coronavirus.

Porquia, 58, a founding member and city coordinator of the party list group Bayan Muna, was shot dead inside his rented bamboo house at Barangay Sto. Niño Norte in Arevalo District here past 5 a.m.

He suffered eight bullet wounds, including a fatal one in the head. A bullet pierced through his fingers, suggesting that he tried to shield himself from his attackers, investigators said.

Porquia’s family and colleagues decried the attack and demanded justice.

“They killed my ‘tatay’ (father) when all he wanted was to help the poor. They killed my tatay in the middle of a crisis when all he did was to give relief to those who need it,” his son, Lean, said in a statement on behalf of his family.

Porquia is survived by his wife Josephine, son Lean and daughter Krisma Niña. His family lives in Jaro District while he rented a house that he was converting into a small restaurant and coffee shop in Arevalo.

Reports said Porquia was putting on his shoes and was preparing to go to the market at 5:17 a.m. when two men wearing face masks barged in and shot him.

His companion, who was unhurt, was held at gunpoint and ordered to kneel before Porquia was shot, said Police Capt. Marlyn Roquero, Arevalo police chief.

Investigators recovered spent shells from 9 millimeter and .22-caliber guns at the crime scene.

Siegfred Deduro, Bayan Muna vice president for the Visayas, said Porquia was leading their organization’s campaign to provide food and other assistance to residents affected by the enhanced quarantine measures in the city.

Deduro said Porquia had resisted attempts of the police station in Molo District here to stop the distribution of food packs, an allegation denied by the police.

“His brazen murder was done while we were in a lockdown—when police and other security personnel practically controlled all movement of residents. How can this happen?” Deduro told the Inquirer.

“Even amid a pandemic, when all of us are trying to help each other cope with the crisis, the killing of activists and those critical of the Duterte administration continues,” he said.

Porquia was among the leaders of militant organizations whose photographs were posted in the city on Dec. 11, 2018, and March 16, 2019. The posters accused them of being leaders of or linked to the Communist Party of the Philippines and its armed wing, the New People’s Army.

Mayor Jerry Treñas said he was shocked by the killing, especially since he knew the victim. He promised to monitor the investigation.

Lean, who is based in Manila, said he last spoke to his father on the night before he was killed.

He said he wanted to return home to bury his father but this would be difficult due to travel restrictions.

“How can I go home and grieve? How can we cry for justice when justice is elusive for people who fight for justice? I can only place my rage in words that mean nothing to those who killed [my father],” he said. INQ