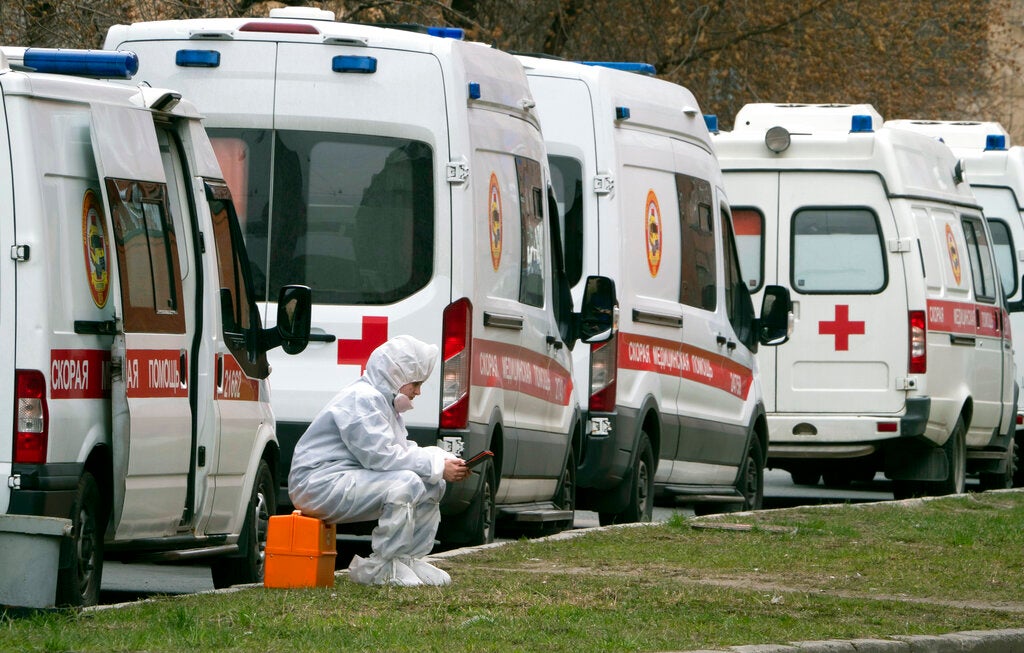 A medical worker wearing protective equipment waits near ambulances, standing in line to deliver patients suspected of being infected with the coronavirus to the admissions department at the Pokrovskaya hospital in St.Petersburg, Russia, Tuesday, April 28, 2020. (AP Photo/Dmitri Lovetsky)

Coronavirus cases in Russia surged past 100,000 on Thursday as the country recorded its largest daily increase, after officials warned infections had not yet peaked and extended lockdown measures.

A spike of 7,099 confirmed infections in the last 24 hours brought Russia’s total to 106,498 cases and 1,073 deaths from the virus, the government’s coronavirus information site said in a daily update.

With the number of cases increasing by several thousand each day, Russia is now leading European countries in registering new infections.

Russia’s success was down to “tough self-isolation decisions” and government measures “which convinced people to stay at home,” Peskov told the RTVI television channel.

He also said Russia had quickly and efficiently increased the number of available hospital beds.

The virus has spread to all 85 regions of the country, with Moscow the epicenter with around half the total cases.

Russia recently surpassed Iran and China in the number of confirmed infections and is now eighth in the world in virus cases, according to an AFP tally.

The country has carried out nearly 3.5 million virus tests, health officials said, and is ranked 19th in the world for the number of coronavirus deaths.

President Vladimir Putin warned this week that the situation remained “very difficult”, saying Russia had managed to slow the spread of the epidemic but cautioning that “this should not reassure us.”

Medics in Russia have complained of shortages of protective equipment and testing kits and hospital staff are becoming increasingly concerned with deaths in the medical community.

Medics and trade union representatives have told AFP that the problem is particularly severe outside of Moscow where staff are at an even greater risk of infection.

The Kremlin this week extended until May 11 a “non-working” period when Russians would stay at home but still receive their salaries as part of sweeping efforts to contain the virus.

Yet the measure has brought uncertainty to the economy and business owners struggling to pay full salaries to employees while shutting their doors to customers.

The government has been phasing in anti-crisis measures, such as loan payment deferrals or cheap loans, but there is concern that Russians are unable to access the support.

Despite the steady increase in cases, Putin said that Russia may begin to gradually lift different quarantine regimes throughout the country from mid-May.

Prime Minister Mikhail Mishustin on Wednesday extended a ban on entry for foreigners into the country, which was due to expire Thursday, until “the fight against the infection is over and the epidemic situation has improved.”

The pandemic has thwarted several major political events for the Kremlin this year, with Putin postponing a massive military parade on May 9 commemorating the 75th anniversary of victory in World War II. Many world leaders had been due to attend.

The Kremlin also postponed an April 22 vote on landmark constitutional reforms, which would have paved the way for Putin, 67, to potentially stay in power until 2036.