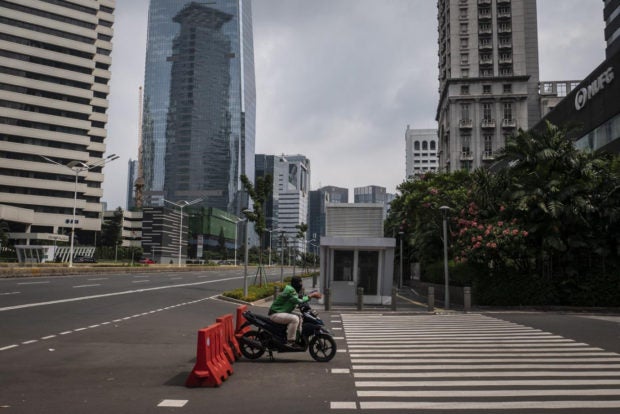 A motorcycle taxi driver waits for orders in the business district on Jl. Sudirman on April 26. (Antara/Dhemas Reviyanto) via The Jakarta Post

JAKARTA — The Indonesian government has claimed that Jakarta, the country’s epicenter of COVID-19, has flattened the curve of transmission, but experts say further studies are necessary before coming to such a conclusion.

“We can explain in the latest development that, particularly for Jakarta, the new cases have rapidly slowed down and flattened,” said COVID-19 task force chief Doni Monardo after a meeting with President Joko “Jokowi” Widodo on Monday.

Doni, who also heads the National Disaster Mitigation Agency (BNPB), said the implementation of large-scale social restrictions (PSBB) in the capital city had contributed to that outcome.

“Pak President asked all of us to work even harder and encourage communities to be more disciplined and officials to be stricter, so we can start going back to a normal life in July,” Doni added.

Jakarta Governor Anies Baswedan said last week that the city administration had observed an “increase of COVID-19 cases at a rate that is relatively constant” for the past days.

He further said that there had been a “significant decline” in the number of burials using COVID-19 protocol, claiming it had subsided from more than 50 to between 30 and 40 burials per day. Jakarta’s data on burials based on COVID-19 protocol, however, show that from April 12 to 14 as well as April 18 and 22, when Anies made the statement, such burials reached 50 and above daily.

“Was it a temporary slowdown or a permanent trend? We will keep monitoring [the data]. Hopefully, this is a trend that is permanent, which means that [COVID-19 infections] have been declining,” he said.

Central government data on the city’s daily reported cases, meanwhile, show that the number has rather been fluctuating. On Monday, when Doni made the statement, the city recorded 71 new cases. It recorded 133 new cases on Tuesday.

While acknowledging that the PSBB might be helping to slow down transmission, experts have warned against taking data on new confirmed cases at face value, mainly because the country’s lack of PCR testing capacity might lead to low and late reporting of new cases.

A biostatistic researcher at the University of Indonesia’s (UI) School of Public Health, Iwan Ariawan, said that without further information on the number of tests being carried out and the time gap between the collection of swab samples and the announcement of test results, interpreting a decline in reported COVID-19 cases was subject to a high risk of bias.

Iqbal Ridzi Fahdri Elyazar, disease surveillance and biostatistics researcher at the Eijkman-Oxford Clinical Research Unit, said any good news on a decline in new cases in Jakarta had to be supported by accurate data, which would largely rely on the country’s testing capacity to reveal new cases in a timely manner. He said a systematic epidemiology study that met scientific standards was needed, aside from ensuring a wide testing scope.

“Vietnam tests 2.17 per 1,000 people, while Indonesia tests 0.21 per 1,000 people. That means the testing scope in Vietnam is 10 times that of Indonesia. Vietnam’s claim of a decline in new cases, then, is more reliable, because it is testing more people at risk,” Iqbal said.

Indonesia has only tested 62,544 people as of Tuesday, resulting in 9,511 testing positive. Data compiled by the Post from the government’s daily briefing showed that the country tested an average of 2,300 new people daily in the past week.

Iwan of UI said that, based on his team’s estimation, Indonesia would need to carry out PCR test on 3 million people to detect and isolate cases, but as massive testing was difficult, the PSBB could be the intervention the country needed to suppress infections.

Iwan said his team had tried to evaluate the efficacy of Jakarta’s PSBB by using Google’s data, which showed that the proportion of people staying at home had indeed seen a spike compared to January and February. He said that, according to the data, about 59 percent of people in Jakarta had stayed at home on April 19.

“However, modeling in Australia shows that 80 percent of the people need to stay at home to deflate the epidemic curve,” he said, referring to modeling by Sydney University published on preprint website arXiv.

According to his team’s modeling, Iwan said that with the currently imposed intervention, Jakarta would see its peak of cases in mid-May and if the PSBB was to bear success, the capital could gradually loosen up its restrictions starting from July. He warned of lifting the restrictions too early to avoid a second wave of infections.

Another epidemiologist at UI, Tri Yunis Miko, had doubts that Jakarta would return to normal in July, urging the authorities not to lift restrictions before there were zero new cases reported. He believed, however, that Doni’s statement could instill hope among the people and rally support for everyone to work together in curbing transmission, including by following the PSBB rules.