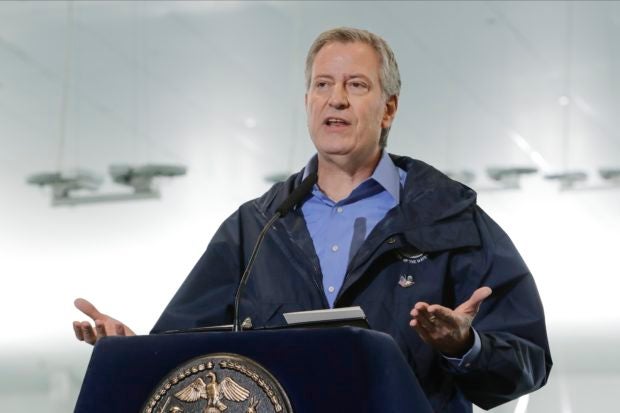 In this March 31, 2020 file photo, New York City Mayor Bill de Blasio speaks at the USTA Indoor Training Center where a 350-bed temporary hospital will be built in New York. De Blasio oversaw the dispersal of a large, tightly packed Hasidic Jewish funeral and lashed out at the mourners who had gathered in defiance of social distancing rules. He tweeted Tuesday, April 28, that his message to the Jewish community “and all communities” is that the time for warnings has passed. (AP Photo/Frank Franklin II, File)

NEW YORK — New York City Mayor Bill de Blasio oversaw the dispersal of a large, tightly packed Hasidic Jewish funeral and lashed out at the mourners who had gathered in defiance of social distancing rules intended to curb the spread of the coronavirus.

“My message to the Jewish community, and all communities, is this simple: the time for warnings has passed,” De Blasio tweeted Tuesday after police dispersed the funeral in the Williamsburg section of Brooklyn.

In another  tweet, De Blasio said, “Something absolutely unacceptable happened in Williamsburg tonite: a large funeral gathering in the middle of this pandemic.” He said he went there to ensure that the crowd was broken up and added, “what I saw WILL NOT be tolerated so long as we are fighting the Coronavirus.”

Images posted on social media show hundreds of people on the street for what was reportedly a funeral for a rabbi who had died of COVID-19, the disease caused by the coronavirus. Some but not all of the mourners wore face coverings.

A police spokesman said Wednesday that the crowd was dispersed without arrests.

Critics accused de Blasio of singling out the Orthodox Jewish community for censure when others have violated social distancing rules as well.

“This has to be a joke,” City Councilman Chaim Deutsch, who represents a large Orthodox Jewish constituency, tweeted. “Did the Mayor of NYC really just single out one specific ethnic community (a community that has been the target of increasing hate crimes in HIS city) being noncompliant??”

Anti-Defamation League CEO Jonathan Greenblatt tweeted that generalizing about the whole Jewish population of New York City “is outrageous especially when so many are scapegoating Jews.”

Others noted the crowds that gathered earlier Tuesday to watch a flyover by the Navy’s Blue Angels and the Air Force’s Thunderbirds to honor health-care workers.

“Only bigots have a problem when a few 100 Hasidim do what thousands of people in the same city have done the same day (not social distance).” the Orthodox Jewish Public Affairs Council tweeted.

The coronavirus causes only mild symptoms in many, but it can cause serious illness or death for some, particularly older adults and those with certain health conditions.

In the months since the virus began spreading across the world, adherence to social distancing guidelines has been a challenge in some Orthodox Jewish communities, where large families often live in crowded neighborhoods and trust in secular authorities is low.

Leaders of several U.S. Orthodox organizations issued a statement in March, urging their members to heed social distancing rules after the Fire Department had to break up a large Orthodox wedding in Brooklyn. That effort was an unusual step among disparate groups to help shut down multiple daily prayers and other traditional practices that are central to many Orthodox Jews’ daily lives.

However, the New York “Jewish community” that de Blasio addressed in his tweets is significantly larger than the Hasidic groups that live and pray in large numbers in Williamsburg as well as the Crown Heights and Boro Park neighborhoods of Brooklyn.

New York’s Jewish population is estimated at 1 million-plus, including non-observant Jews. Among American Jews, 10% identify as Orthodox, according to a 2013 study by the nonpartisan Pew Research Center. The majority of Jews identify with the Reform Jewish movement or do not identify with any specific Jewish group.