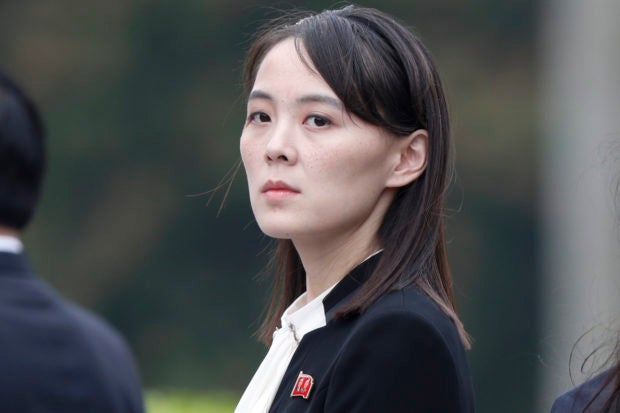 SEOUL — Amid conflicting reports about the health of North Korean leader Kim Jong-un, a parliamentary think tank in South Korea has weighed in on Kim’s younger sister Kim Yo-jong taking over the throne of the reclusive regime.

“Kim Jong-un, in order to overcome the national crisis, could expand Yo-jong’s status and role as the ‘party center,’” the National Assembly Research Service said in a report released on Wednesday. “Party center” is a term that was used for both Jong-un and his father Kim Jong-il when they were recognized as the official successors of the country.

The think tank assessed that the 32-year-old Yo-jong’s reappointment as an alternate member of the ruling Workers’ Party’s top policymaking body earlier this month will strengthen the political foothold of the “Baekdu bloodline,” referring to the ruling Kim family.

“From early this year, Yo-jong has received the spotlight for active roles, including announcing official messages to South Korea and the US, standing in for Jong-un. As an individual political figure, she has virtually taken on the role of the party’s center to undertake the responsibility of the party’s monolithic leadership system,” the report said, adding she has been receiving even more attention since Kim’s health came into question.

The report, however, added that Yo-jong’s rise to top leadership would not occur immediately, requiring another official process after Jong-un returns to the spotlight.

Kim Jong-un’s whereabouts and his health status have been the subject of heavy speculation in recent weeks, with some reports indicating the leader could be dead or in a vegetative state. The conjecture started when Kim skipped an annual visit to the Kumsusan Palace of the Sun on April 15 to commemorate the birth of the North’s founding father, the leader’s late grandfather Kim Il-sung, an important event he had attended every year since assuming power in 2011.

The leader was last seen on April 11 in Pyongyang, when he presided over a politburo meeting of the ruling Workers’ Party, during the time when he reinstated his sister to the body.

Yo-jong is believed to have been dismissed from the politburo last April, after the collapse of the summit in Hanoi between her brother and US President Donald Trump.

As speculation continues to mount over the health of Jong-un, questions are swirling over who is next in line in the event of Jong-un’s death.

Many experts and reports have pointed to Yo-jong, who served as de facto chief of staff and confidante to her older brother, as the next ruler of the regime, with no firm details known about Jong-un’s two or three young children.

ADVERTISEMENT
Read Next
Tests in recovered patients in S. Korea found false positives, not reinfections, experts say
EDITORS' PICK
A gem of a residence in the new normal
Been there, done that but what’s the difference between MECQ and GCQ?
BREAKING: 3,226 latest COVID-19 cases bring PH’s total to 106,330
Water remains our saving grace right now
PNP: Checkpoints back in MECQ areas
Smart 5G goes live
MOST READ
MECQ guidelines in infographics
Doctors group to Duterte: ‘There was never a call for a revolt’
MECQ in NCR, other areas: Mass transportation suspended, quarantine pass required anew
Want higher pay? Join the police force, Duterte tells nurses
Don't miss out on the latest news and information.