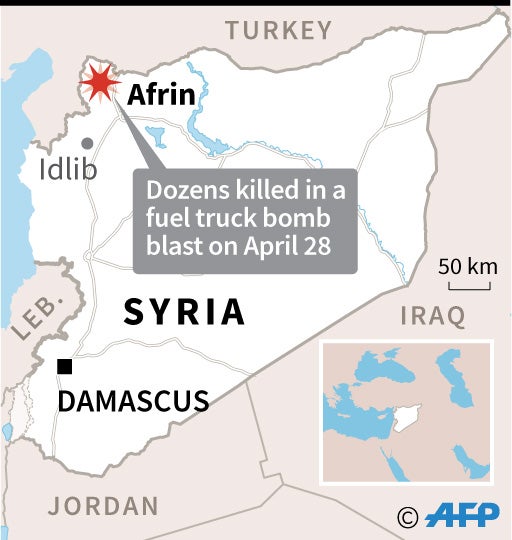 BEIRUT, Lebanon — A fuel truck bomb in a market in northern Syria killed at least 46 people including Turkish-backed rebel fighters on Tuesday, the Syrian Observatory for Human Rights said.

The blast in Afrin, a city controlled by Ankara’s proxies, came as people went shopping in preparation to break the Ramadan fast, according to the U.S. State Department, which condemned the attack as a “cowardly act of evil.”

Rami Abdul Rahman, head of the Britain-based Observatory, a monitor with a network of sources inside Syria, said “at least 46” people had been killed and 50 wounded, some critically, adding that the death toll could rise.

At least six pro-Turkish Syrian fighters were among the dead, he added.

It was not immediately clear who was behind the blast, one of the largest to rock Afrin since Turkish troops and allied rebels seized the region from Kurdish forces in March 2018 after a two-month air and ground offensive.

The Turkish defense ministry blamed the attack on the Kurdish People’s Protection Units (YPG), which it views as a “terrorist” offshoot of the outlawed Kurdistan Workers’ Party (PKK).

“The enemy of humanity PKK/YPG has once again targeted innocent civilians in Afrin,” the Turkish ministry said on Twitter.

US State Department spokeswoman Morgan Ortagus said the attack had claimed the “lives of dozens of people shopping in the central market as they prepared to break the Ramadan fast”.

“Such cowardly acts of evil are unacceptable from any side in this conflict.”

The PKK has been waging a bloody insurgency in Turkey for three decades.

In January, at least seven people were killed in a car bombing in Azaz, another northern city held by pro-Turkey forces, according to the Observatory.

The Syrian conflict has killed more than 380,000 people since 2011 and forced more than half of the country’s pre-war population from their homes.