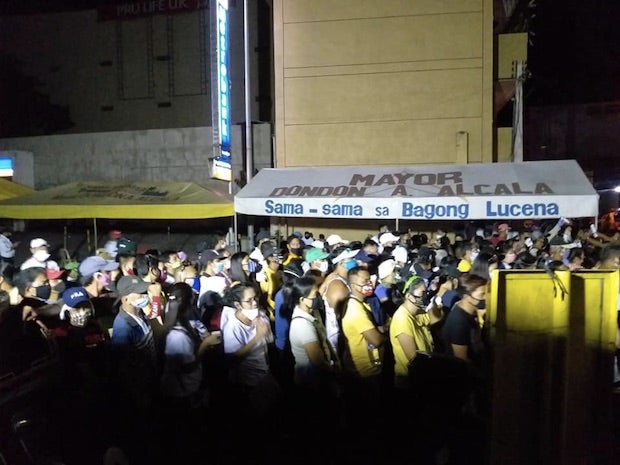 MANILA, Philippines – Several residents of Lucena City in Quezon province have expressed concern over the lack of physical distancing and the long lines in sites where financial aid for the COVID-19 lockdown is being distributed.

A resident of the city said on Tuesday sent several photos to INQUIRER.net showing long queues at the Pacific Mall Lucena where the government’s social amelioration program (SAP) was being distributed.

According to the resident, who asked that his identity be withheld, the lines of residents from 11 barangays started early morning and ended well into the night

“I don’t know what time it ended, but it was surely beyond the curfew, and it was not finished even when it was already dark,” the resident said in Filipino.

Quezon province has a curfew that lasts from 8 p.m. to 5 a.m.

A Facebook page named Lucena Problems had photos and videos showing a blatant violation of physical distancing measures — which requires at least a one-meter distance between individuals to limit the spread of the latest coronavirus strain.

Lucena, being in the Calabarzon region, is under the enhanced community quarantine (ECQ) over Luzon.

“All the sacrifices of our workers, our countrymen, and the medical workers are just going to waste,” the page said in Filipino.

Another Facebook post by Robert John Rafallo Daguil showed a lack of physical distancing while people are lined up even at dark — despite the curfew.

INQUIRER.net tried to get the side of Lucena City Mayor Roderick Alcala and the city’s Public Information Office (PIO) to verify the alleged photos, but both have not replied as of this writing.

However, the PIO confirmed, through a Facebook post on its official page, that the SAP distribution was indeed scheduled on Tuesday, April 28.  The office also admitted that the release of the social aid would be held on various venues instead of a house-to-house distribution, due to understaffing.

[Notice: The cash pay-out programs in Lucena City will start tomorrow.  But because we are understaffed, the areas agreed upon would be the venues for the distribution, along with the implementation of social distancing measures.]

The SAP is intended for workers affected by the enhanced community quarantine, which suspended work except for essential frontline services.  People who rely on daily earnings and whose jobs cannot adjust to a work-from-home scheme have been left without income.

Under the Bayanihan to Heal As One Act, 18 million Filipinos will be given financial aid depending on the minimum wage in their areas.

As of this writing, Lucena has 23 confirmed COVID-19 patients, while another 59 are suspected of carrying the coronavirus.

The Luzon-wide quarantine was extended until May 15 due to the high incidence of coronavirus infections.

As of Tuesday, the Department of Health has confirmed 7,958 COVID-19 patients, of whom 530 have died and 975 have recovered.  Worldwide, over 3.04 million individuals have been infected, while at least 210,913 have died from the disease and over 889,406 have recovered from it.