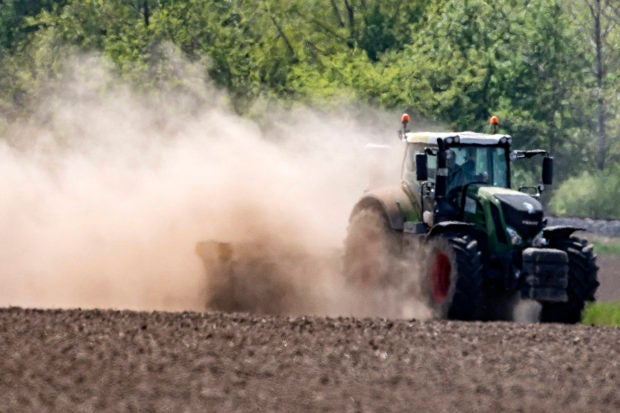 A tractor tills a field during a long time of drought near Bad Lauchstaedt, Germany, Monday, April 27, 2020. (AP Photo/Jens Meyer)

BERLIN — Germany’s farmers, foresters, and firefighters are eagerly awaiting widespread rain forecast for later this week, as a warm, dry spring has raised fears of third summer drought in as many years.

“We can see that the last two summers have been extremely dry, that this is already causing enormous problems for our agriculture and forestry,” she said. “That is why we have to adapt to the changes we can no longer avert, and we must ensure that it does not get any worse. … We really must push ahead with climate protection measures now.”

Reservoirs are already low, and if there is no heavy rain in the next two to three weeks widespread crop failures could ensue, said Mojib Latif, a meteorologist with the Helmholtz Center for Ocean Research in Kiel.

The 2018 drought caused severe crop damage, resulting in such a poor harvest that the German government had to come up with an aid package for farmers worth hundreds of millions of euros. At the same time, rivers and lakes hit record low levels, causing environmental disruption and hitting the freshwater shipping industry.

Last year was also exceptionally dry, causing widespread damage to the country’s forests. Wildfire warnings are already at their second-highest level this year, Ulrike Hoefken, minister for the environment and forests in the state of Rheinland-Palatinate, told the dpa news agency.

“A third summer drought in a row would be catastrophic,” she said.

There has been almost no rain since March 14, said German Weather Service meteorologist Andreas Friedrich, and it’s too early to tell whether the precipitation expected later this week will be enough to alleviate the situation.