WASHINGTON — The Pentagon on Monday (April 27) released footage depicting “unidentified aerial phenomena” that was taken by US Navy pilots during training flights in 2004 and 2015, media reports said.

The three videos, that have circulated online for years and have now been declassified, show an oval object rapidly moving while being recorded by infrared cameras, CNN reported.

The video taken from 2004 was recorded off the coast of southern California while the other two were caught by F-18 pilots operating off the Atlantic Coast in January 2015. In two of the videos, the pilots reacted in awe at the speed with which the object was moving, with one person speculating it could have been a drone, the CNN report said.

The videos first became public after being leaked in 2007 and 2017 and the Navy had verified their authenticity in September last year. The Navy has formal guidelines for reporting on UFO sightings.

In a statement, Pentagon spokesman Sue Gough said it was officially releasing the videos “in order to clear up any misconceptions by the public on whether or not the footage that has been circulating was real, or whether or not there is more to the videos”.

“After a thorough review, the department has determined that the authorized release of these unclassified videos does not reveal any sensitive capabilities or systems and does not impinge on any subsequent investigations of military air space incursions by unidentified aerial phenomena.”

The statement added that “the aerial phenomena observed in the videos remain characterized as ‘unidentified'”. 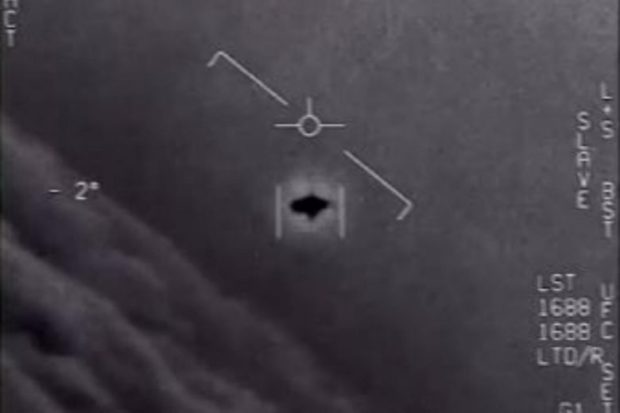 The videos first became public after being leaked in 2007 and 2017 and the Navy had verified their authenticity in Sept 2019.PHOTO: SCREENGRAB FROM US NAVY via The Straits Times/Asia News Network

Retired US Navy pilot David Fravor, who was one of the pilots involved in the 2004 encounter, told CNN in 2017 that the object was moving erratically. He described the object as white and oblong, saying it was moving while pointing north.

“As I got close to it … it rapidly accelerated to the south, and disappeared in less than two seconds,” he said. “This was extremely abrupt, like a ping pong ball, bouncing off a wall. It would hit and go the other way.”

Former Senate democratic leader Harry Reid from Nevada, who launched a classified Pentagon program that studied recordings of aerial encounters with unknown objects, called for a closer study of the security implications following the release. The program, which was launched in 2007, ended in 2012 after the Pentagon decided to focus its funding on other priorities.

“I’m glad the Pentagon is finally releasing this footage, but it only scratches the surface of research and materials available,” he said in the tweet. “The US needs to take a serious, scientific look at this and any potential national security implications. The American people deserve to be informed.”